What a contrast to yesterday! The weather is as bad as it was good the day before. A vicious gale had blown in overnight and we woke to 2ft breakers surging past us. 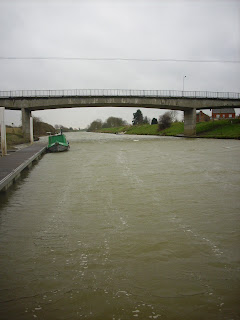 These drains are very exposed and in this quarter the wind funnels between the banks generating impressive swells complete with whitecaps and spindrift! The wind had finally turned, after 6 days in the north it was now blowing a gale from the south west. The mooring had become very exposed and uncomfortable so we moved on without delay, butting into nasty short swells which resulted in sheets of spray from the bows. As WB pushed on through the waves the troughs repeatedly lifted the counter out of the water, allowing the prop to suck in great gulps of air and triggering shuddering bouts of cavitation. 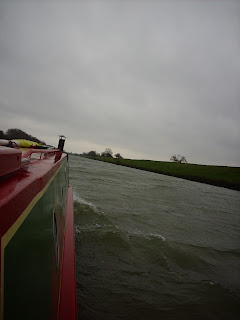 The engine never faltered and pressed us on at 1900 rpm passing each 1km distance marker every 7 mins. In the absence of anything else to look at one starts to anticipate these distance markers which appear out of the murk like lonely sentinels giving assurance that progress is indeed being made towards our destination.
Both my Nicholson guide and the info provided by the Torksey Locky were calibrated in miles so I spent ages working out how many km posts we would pass on our way to Boston, based on a known distance of 32 miles. I guessed at 50 km and the final tally of 51 was close enough to prove the Capt Ahab still has his mental marbles.

There is not a lot to say about these last 16 miles out to the coast, a stretch which would constitute a full days cruising elsewhere but which we covered in less than four windswept hours. The canalised river is almost perfectly straight, wide and deep, never deviating from its course by more than a degree or two and was restored in the 1700’s by the people of Boston to both improve drainage and transport links to Lincoln.

We were planning a exploration up Kyme Eau towards Sleaford but in the event we pressed on and were relieved when the towering Boston Stump emerged from the rain as we rounded the final bend at Antons Gowt – Gateway to the Navigable Drains. 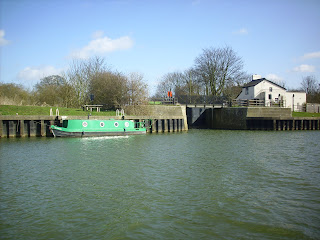 By now it was clear that the primary purpose of this waterway is to drain the surrounding fields, acting as a huge reservoir for the many pumping stations and with the water flushed (sluiced) away on the next ebb tide. Navigation comes a distant second and boaters need to be mindful of their place in the pecking order. As we arrived the weather forecast was for a lot more rain and all the pumping stations were running full tilt, making room for more water in the surrounding land drains. The Witham was also being sluiced at top speed and was about 4ft down, making mooring difficult. These rapid fluctuations in water level made us appreciate the dangers of lingering in the Navigable Drains and the risks of becoming stuck behind low bridges for days or possibly weeks at a time. This was clearly not the time to explore the mysterious drains that surround Boston so we decided to leave them for a future expedition – maybe when the South Forth Foot is open for business in 2009. 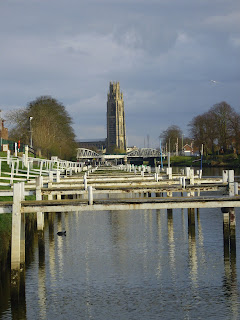 It is widely quoted that “Boston dosn’t like narrowboats”. In truth, the moorings are almost entirely geared towards plastic cruisers. When we visited the BW visitor moorings hadn’t opened for the spring and our attempts to moor at Boston Marina were met with a curt “ we don’t do narrowboats”. Its possible to see why the town has a perceived dislike of narrowboats, but having lived here for five years on the 1980’s I think it has more to do with local communication style than actual sentiment. Locals tend to approach conversation in a manner reminiscent of Yorkshiremen – blunt and not given to hyperbola. In truth, the scaffold based finger jetties are far too fragile to resist the enormous sideways pressure of a deep drafted narrowboat when the river is being sluiced at maybe 3 or 4 knots. In the event, a solicitous approach to the lock keeper at Grand Sluice allowed us access to the BW visitor moorings for the night (£5 per night thereafter) on the understanding that we be away by 10.00 am the following day when sluicing was scheduled to restart. For the record the limited lateral moorings are enough for 2 narrowboats, maybe three if desperate, complete with water, power and rubbish disposal and all in a secure locked compound. Watch out for rapidly changing water levels which rose 4ft overnight. Keep your mooring ropes loose and use the rings on posts which let you ride up and down without fuss or danger.

We had a good wander round Boston – a surprisingly pretty market town which is very self sufficient due in part to its distance from major cities. There are two great markets on Wednesdays and Saturdays in the shadow of St Botolphs Church aka “The Stump”. 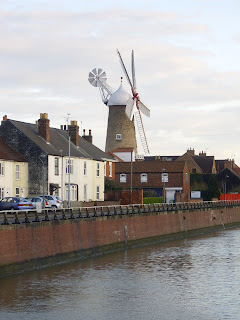 We also took the opportunity to hike over to the Maud Foster and view my 1st house in Hospital Lane, which was remarkably unchanged. 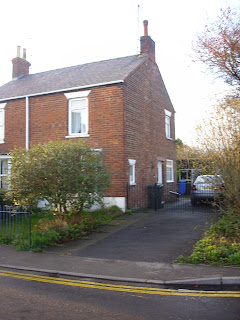 There is lots to see here but one point of particular interest can be found beside the Grand Sluice Lock. In the mid 1800’s an iron post was driven into the ground right down to the underlying bedrock. This was set up to monitor land shrinkage and it was surprising to see a good 10 metres exposed, with the shrinkage showing no signs of abating. What with land shrinkage and rising sea levels Boston had better get cracking on the Witham Barrier or there wont be anything here to protect. 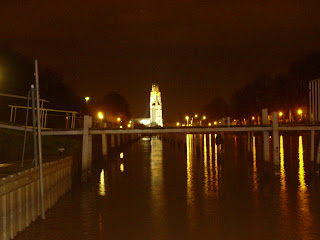