Saturday was scheduled for a day trip with old friends, entering the Navigable Drains at Antons Gowt and then back up to Boston via Cowbridge Lock to the Maud Foster, mooring at the end of Hospital Lane.
Having seen the low levels in the Maud Foster the previous evening and heard the storm warnings on the radio we decided on a change of plan and to beat a hasty retreat to the Trent, making a passage to the Midlands whilst it was still possible to do so. 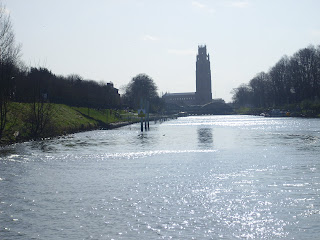 In spite of the awful weather forecast Saturday dawned clear and bright with a great view of the Stump behind us, and an endless reach of water ahead reflecting the bluest of skies. 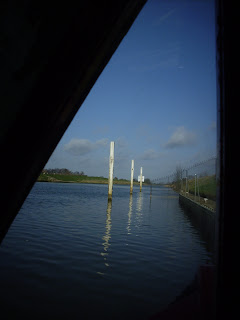 During the night the water rose by 4 ft announced by an occasional rattle on the mooring rings to remind us of our steady ascent. With sluicing due to restart mid morning we cleared the moorings at 10.00 am minus the windproof clothing which had been essential for the last 8 days. 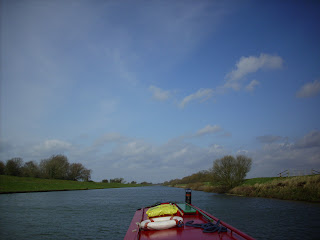 The long reaches back to the entrance to Kyme Eau were positively pleasant with the spring sun on my back but is was sobering to note that the pointy gates to the various land drains like Timberland Delph and Dogdyke had sealed themselves overnight, locking in any boaters which might have been tempted to use them for an overnight stop. 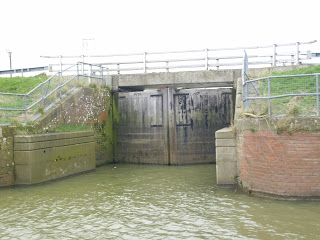 As we progressed the clouds rolled in from the south - west and the wind strengthened back to gale force, returning the Witham to a procession of whitecaps. This time we were running before the find and kept pace with the swells making the journey much more comfortable. 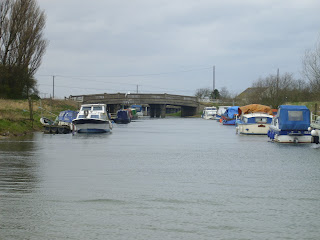 On out outbound journey we had noticed a sign at Chapel Farm advertising logs for sale. The persistently cold weather had necessitated continuous use of the woodburning stove, and whilst we had a couple of sacks of coal left on the roof, the wood store was down to the last few scraps of kindling. We therefore decided to stop and replenish our supplies. The owner was rather nonplussed by our arrival on foot and we appeared to be the first customers to arrive on the water. When we asked about the price he enthused about the fantastic lifestyle to be had afloat and told us to take as much as we could carry from the woodshed – all free of charge! Jeff and I managed three huge bags between us, which kept us toasty and warm all the way back to the Midlands. Three cheers for Chapel Farm.

As we pressed on towards Lincoln the water level continued to rise, first covering the fishing jetties and then the flood plains to the high banks. By the time we reached Bardney, what had been a 6 foot fall the day before had now been reduced to 2ft 6in! The speed of the changing water levels is sobering. We finally arrived in Lincoln at 5.30 pm and worked through the interminably slow Stamp End Lock in a persistent drizzle carried along by a high wind which threatened to rip the Cratch Cover off its hooks. 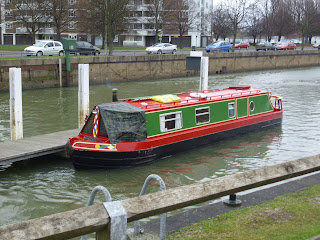 In an attempt to get out of the wind we tried to moor in the narrow channel just south of the Glory Hole, but a combination of the wind being funnelled down the concrete canyon and an abundance of teenagers in the adjacent shopping centre prompted a re think. With the light completely gone we motored across Brayford Pool with the aid of our tunnel light and to the startled stares of diners in the floating restaurant. 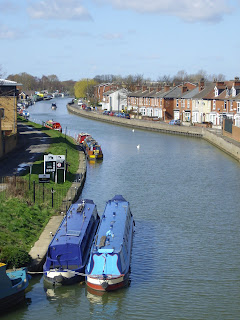 With the few visitor moorings occupied we tied up on some empty long term moorings alongside the University halls of Residence which broke the force of the wind and provided a sheltered spot for the night.
Posted by Andy Tidy at 9:58 pm