As you can imagine, I'm not a bling sort of bloke. And yet, if you had been tailing me recently there is evidence to suggest otherwise.

You would have found me deeply engrossed in the bling section of Halfords. Don't worry, I havn't bought a Renault Clio (the boy racers car of choice), tinted the windows, lowered the suspension, added alloy wheels and a big fat exhaust. Neither for that matter have I been tempted by a Vibe Technologies Super Sub Woofer which fills the boot, or worst of all, fitted those stupid blue lights underneath the car!

No. in fact I was paying homage to the new love of my life - a 120 gigabite i-pod classic. Until recently I viewed i-pods as an affectation beloved of adolescents and poseurs, but I am a convert. When I worked in the Venture Capital Industry the rule of thumb was that for an innovation to be really successful it has to be five times better than its predecessor. How this multiple was measured was open to debate, but the i-pod certainly fits the criteria.

If I could take one item back into my past to show and impress my teenage self it would be the seemingly humble i-pod. A machine no larger than a calculator that can store my entire extensive music collection, and then twice as much again! Absolutely mind blowing and such a far cry from my treasured box of 15 favourite cassette tapes. They were even called compact as I recall!

Having succumbed to Apple's techno wonder, I find myself wanting to use it wherever I go. The car was a problem initially because being old (4 years!) the stereo doesn't have an i-pod plug. This was overcome by one of those radio widgets which transmit a signal that can be picked up by the radio, and powered by the cigarette lighter. But what of the boat? I can't go away for two weeks without a way to access my favourite tunes - or even worse - a power source to re-charge the object of my infatuation. 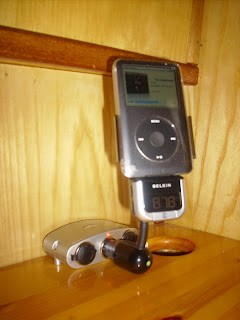 This brings me back to my visit to Halfords. I figured that if my radio thingey can work in the car, then why not on the boat radio / CD? The problem was a lack of power, or rather the fact that I built a 12v power supply in the wrong place and only included one. These boy racers know a thing or two about power supplies for all their bolt on accessories, so if you can't beat them why not join them?

I am now the proud owner of a 12 volt power supply splitter which plugs into the inaccessible socket and delivers three sources of yummy 12v, all backlit by a lurid pulsating blue light. Very hip, very trendy, very boat boy bling!

Whatever next? Perhaps a spoiler on the back, furry dice in the front and some spinners down the sides? Who knows!

I have been the proud owner of an IPod for about 3 years now, mine is a 60 gig and now has over 6000 tracks and about 40 music videos and couple of full movies. On the boat I have this amazing beast http://www.fat-man.co.uk/docs/product_07/iTube_ValveDock_Carbon_Edition_with_Speakers.shtml though I chose some better speakers. With no TV on TRB music is essential.