Index of posts in this series:
1. - Calf Heath to Goldstone Wharf - this post
2. - Goldstone Wharf to Nantwich
3. - Nantwich to Barnton
4. - Barnton to Manchester
5. - Castlefields to Portland Basin
5. - Aston under Lyne to Millbrook
6. - Millbrook to Diggle
7. - Standedge Tunnel
8. - Marsden to Booth
9.- Booth to Huddersfield
10. - Huddersfield to Salterhebble
11. - Salterhebble to Hebden Bridge
12. - Hebden Bridge to Rochdale Summit
13. - Rochdale Summit to Chadderton
14. - Chadderton to Little Bollington
15. - Bollington - the final twist
29 Miles
2 Locks
9 Hours
Its a good job that "flexible" is one of my middle names. Until about 10 days ago we were all set to reach the Huddersfiled Narrow Canal via the Macclesfield and Peak Forest Canals. This route would have been both the fastest and the most attractive, but sadly a major oil spill on the lower Peak Forest put paid to that plan.
The problem was that Boelle needed to return to the Midlands to meet up with Tilly on the Wednesday and train tickets from Whaley Bridge had already been bought. Some quick recalculations using Canalplanac told me that by doing 9.5 hour days and assuming a fairly fast passage speed (3.75 mph) we could go to Manchester instead, drop Belle of at Picadilly Basin, and still keep our booking at Standedge Tunnel on the Friday. It looked like a plan so we turned left instead of right out of the marina. Whats more, the Cooper Bridge weir repair was completed ahead of schedule so a circular route became possible once more, returning to Manchester via the Rochdale canal.
To ensure a good start we slept on Wand'ring Bark on the Friday night and were off at 7.45am, reaching Autherley Junction at 9.30am, just at Napton Narrowboats were starting up for the day. They completed a much needed pumpout, the first since last summer. The breather hole project has kept the tank smell free for eight months.
The day was forecast as "wintry showers" and so it turned out. We pressed on against strengthening northerly winds which brought with it 3 or 4 short sharp downpours, initially rain but later hail. BW had been hard at work on the Shropshire Union, tree clearing on the offside bank and giving Gnosall Cutting a short back and sides, doubling the width of the navigation channel. 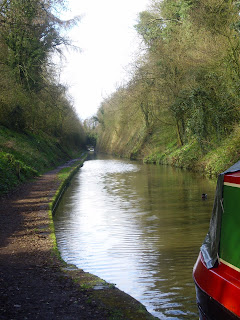 Just beyond Gnosall we came across a BW workboat containing a large pile of logs. We availed ourselves of a few thinner ones which were sawn up for future fuel to supplement the five bags of coal stowed in the foredeck. With very little traffic on the canal we soon reached Norbury and eyeballed Starcross, complete in her matching colours (Ferrari Red and Union Green). 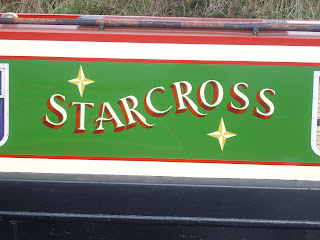 nb Starcross
We pushed on through Grub Street Cutting, thankful for the shelter it provided. Our plan was to try and get a couple of miles ahead of Canalplan's target destination of Park Heath Bridge (48) and finally reached Goldstone Wharf at 5.30pm, settling in for a Pizza and three episodes of 24 (series one) which would become an enduring feature of the two week trip. 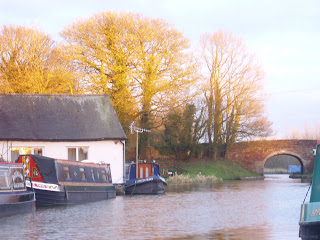 Goldstone Wharf
The clocks change tonight so its early to bed beneath a glorious golden sunset, reflecting the name of the mooring. 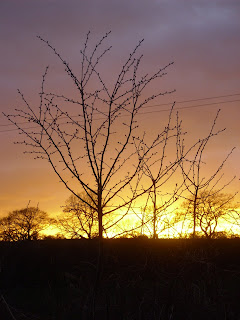