South Pennine Ring - Manchester, Castlefields to Portland Basin (Ashton under Lyne)
1st April 2009 (part one)
Rochdale and Ashton canals
8 Miles
26 Locks
7 Hours
Castlefields may be safe, but it isn't a location which engenders an easy nights sleep. We moored in the main basin alongside the YHA and associated "Y" health club and whilst we had no trouble, a mix of fans humming, a generator rumbling, trains clanking and geese honking in the arches meant that sleep came only fitfully.
The plan was to stage a dawn attack on the Rochdale nine, rising at 5.30am ready for a 6.00am start and an exit from the Ashton badlands by 1.00pm. In the event I hadn't allowed for the clocks changing and I awoke at 5.30 to discover that dawn hadn't! It was pitch black so I flitted in and out of a shallow sleep till 6.00am when the first smudges of a new day showed through the hatch. Belle nudged me in my dreams which featured me raising my hand into golden sunlight to the mental strains of Cat Stevens (aka Yusuf) singing Morning Has Broken! 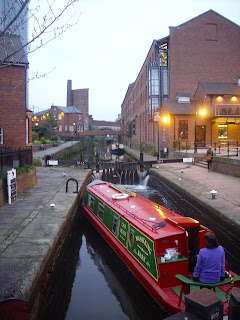 The first gray tinges of dawn progressed so we roused Jeff from his pit and hit the first of the Rochdale flight at 6.30am. There is something exciting about watching a city awake the Rochdale nine provides a top notch viewing platform for this type pf people watching. The towpath becomes crowded with commuters scurrying to work, quite different in their stony silence from their country counterparts who all pass the time of day at every opportunity. To catch someones eye hereabouts is tantamount to a physical confrontation! 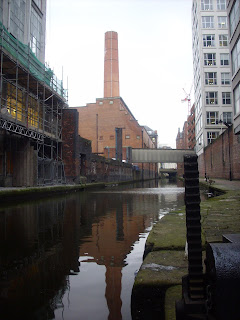 The Rochdale was its usual self, redeveloped and swanky at the lower end, moving through the waterfront bar and club land before hitting the gay village on Canal Street. Jeff was particularly taken with the work of the cunning linguist who had removed the "C" from the street name to better describe the nature of the area... Part way along we passed a stub of canal which leads to the Bridgewater Hall, forever associated with a magnificent gig by the Blind Boys of Alabama, who played there three years ago. The arm is technically navigable but is boomed off so it was only explored on foot.

The locks are stiff and heavy culminating in a subterranean pair at Dale / Ducie Street, complete with the pathetic figure of a teenage rent boy plying his sad trade at 8.30am. All around there was evidence of nocturnal activity and one takes care to avoid the prophylactics and needles. 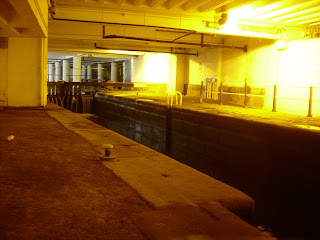 We stopped at Merchants Wharf after a very creditable two hours, walking Belle to the nearby Piccadilly Station for her return to the Midlands, leaving the captain and Jeff to tackle the South Pennine ring as a twosome for 10 days. It's the first time we have enjoyed each others undiluted company for such a long period and therefore represented a rather special opportunity for some serious father / son bonding.

Next it was the infamous Ashton Canal, reviled by many and still declared a no go area by the Caldon Cruising Club. Whilst the names of Ancotes and Clayton conjure terrible images of 1960's housing, urban deprivation and feral kids, this is far removed from contemporary fact. The whole canal has been used as a key to a massive urban regeneration scheme, starting with Piccadilly Village, set back from the canal at Ancotes, and then the funky "Chips" redevelopment. This is an iconic centrepiece for a huge redevelopment scheme which includes a massive new basin complete with a lift bridge. Just add water. The current recession is playing havoc with the redevelopment work, with many sections mothballed awaiting the return of the better times but the buildings already being built are continuing to completion. Chips is a spectacular jumble of misstacked boxes with the names of the local waterways written into the outer skin "Irwell, Trent, Bridgewater, Ashton etc". If you like contemporary architectural statements you will love this. Whatever your position, it has to be better than what went before. 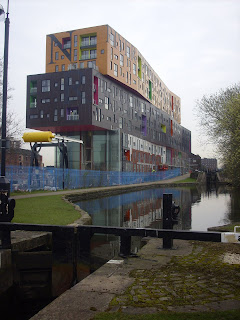 The Ashton locks are dominated by the Manchester City Stadium, built as the centrepiece for the Commonwealth Games. At the time of our visit a large group of Greater Manchester Firemen were undertaking a canal side exercise. I am not sure who was more interested in the other - them or us. The locks are leaky and stiff, many clogged with rubbish but not another boat moving. 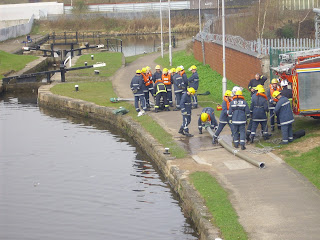 Regeneration has reached the old Chemical Works with vacant site bulldozed to the ground to absolve the owners from the fiscal liability of the recently introduced "empty buildings rates" - an action euphemistically known as constructive vandalism. Only the top end of the canal retains its poorer housing, home to the young boys which gave the entire waterway its terrible reputation for so many years. We passed through on a school day and the terror squad was reduced to a solitary hooded truant at the top lock who managed little more than a few expletives.

The canal finished as it had started, with a major Bellway redevelopment scheme on a newly reconstructed Fairfield Junction complete with another large basin. Once again, the developer was busy finishing what they must and mothballing what they can. I have travelled this route several times over the years and it has changed beyond recognition. Though I hesitate to say it, I believe that the Ashton, taken with the last nine locks of the Rochdale canal is becoming a pleasure to cruise, providing you are out by lunchtime. This has to win an award as "the most changed and improved canal " on the system.
With the canal being used as the catalyst for urban regeneration its a shame that no one organises a self help weekend "crud clearing" event to remove the ever present film of plastic filth. The city centre Rochdale section has managed it - why not the Ashton? That said, BW were much in evidence, painting the balance beams and lock gear ready for a new season.
We emerged into Portland Basin and hour or so later, effectively the end of the Ashton Canal and the start of Peak Forest and Huddersfield Narrow canals. No booms were in evidence, just an oily film on the water, testament to the recent oil spill which has closed the canal for the last month. Whilst we passed a number of moored boats at Guide Bridge and again in Portland Basin, we saw nothing moving all day.
For me this is where the real journey starts, virgin canal over which I have never previously passed. Given the amount of observations and photos I have divided todays blog into two sections and will cover the first stretch of the Huddersfield Narrow Canal tomorrow. In total it was a 6 hour climb from Castlefields to Fairfield. Not a bad run on a fine spring morning and only one weed hatch visit to remove a light dusting of poly bags.
Posted by Andy Tidy at 6:00 pm

We're planning on doing this stretch during our three-week trip in September. Having originally thought about doing Castlefields to Portland Basin in one day, I was then advised to split it in two, with an overnight at Piccadilly Village. Having read your account, I think I'm now more inclined to get up early and do the whole thing in a day.