Wow, what a day. Standedge was always going to be one of the highlights of this trip but in the event is far exceeded our expectations. This is truly on of the seven wonders of the waterways world - the deepest (630ft), longest (5,686 yards), highest (645 ft) canal tunnel in the UK. 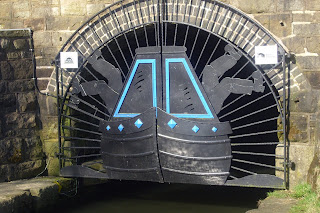 We woke to a cold and frosty start, with the chill picking at our fingers, even through thermal gloves. The bottom of the nine lock flight up to the Diggle portal was unlocked at 8.00 and we were under strict instructions to be ready at the tunnel mouth for 11.30 at the latest. Nb Bufta Drifta were awake a bit earlier than us so they went on ahead and we followed, starting at about 8.30 am and having to be reminded by the elderly gentleman who lives by Navigation Lock (25W) to empty the lock after use. As we worked our way up the sun appeared over Standedge Moor, slowly burning its way through the early morning mist and bathing the valley in sharp spring sunlight. 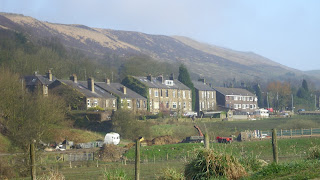 The locks are heavy and stiff due to lack of use over the winter months, with the paddle gear arthritic and the large single gates only yielding to our combined efforts. You see, this was the very first day of the operations through the Standedge Tunnel (pronounced Stannage) for 2009, and the first time that the chaperoned service has been tried out on the general boating public. We were to be the first boats over the Standedge summit this year. 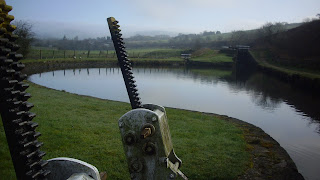 After two hours of effort we passed through lock 32W, the last on the western side of the Pennines and fittingly called "Summit Lock". We were now 645 feet up amid the Pennine moorland, the highest canal in England, dwarfing Titford Pools not insignificant 511 feet. You really feel the altitude in this location, the air is fresher and the canal brushed the tree line with upland moors sweeping down to the waters edge. A location better suited to hiking boots than narrow boats (excuse the tenuous pun!).
We moored up behind Bufta Drifta and waited to see what happens next, all the time fidgeting about the dimensions of our boats, as neither of us has actually compared our craft against the detailed dimensions issued by BW which form part of the booking process. For the record, Wand'ring Bark's booking was D001 - the first ever west to east self steer slot. Our concerns about dimensions were soon forgotten when nb La Viella Vinge rolled up, a part finished sailaway en route to Leeds. LVV wasn't even properly ballasted and her bows were so high that her annodes were exposed and she had a monster list on her. If she could be made to fit through we had nothing to fear! 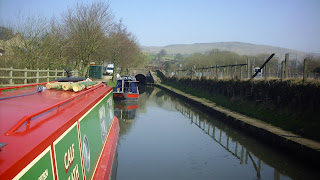 A lone photographer made an appearance first, having photographed a boat entering from the Marsden end at 9.30 am. He was soon followed a team from BW who rolled up in a Transit van at about 11.30 am, by which time we could see the tunnel light of the oncoming craft and hear the occupants chattering over the rumble of their engine. BW were all over LVV, measuring her every dimension, amid much sucking of teeth. After some initial concerns Fred, the lead chaperone decided he could get her through providing some extra ballast was added. First the water tank was topped off and then a huge plastic barrel was placed off centre on the front deck into which about 100 gallons of water was added, forcing the front down. Given the uncertainty of LVV's dimensions it was decided that she would go first, followed by Wand'ring Bark and then Bufta Drifta coming up the rear. 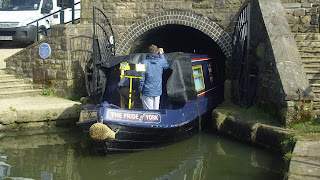 Eventually nb The Pride of York emerged, sparkling with water under the guidance of Fred. The skipper heaved a sight if relief that the only damage he had incurred on his two hour passage were a few scratches round the stern. Helmets and life jackets were returned to BW and everyone settled down for lunch before the reverse route was attempted in the afternoon. It was quite funny to see all the skippers clustered together swapping notes and sharing concerns - a bit like schoolboys comparing experiences about the latest thrill ride at Alton Towers.
BW came round armed with massive arc lights to go in the foredeck and I politely asked them how they planned to power them. "They plug into your 240 volt circuit sir" they replied. With a smile I pointed out that my 240 volt circuit only works when attached to a shoreline and the capacity of my inverter is only just enough to power a laptop! "Hmm, we hadn't thought about that". A hurried radio exchange with control resulted in an examination of our tunnel light which was deemed fit for purpose and off we went, supported by the irrepressible Terry Sigsworth. I recall Steve Haywood's account of his towed passage in Narrowboat Dreams, where the guide managed an unbroken commentary for three hours. I suspect that Terry was that guide! He apologised before he started saying "I tend to talk a lot" but his enthusiasm and love of the tunnel poured out of him and it was impossible not to get caught up in his delight. 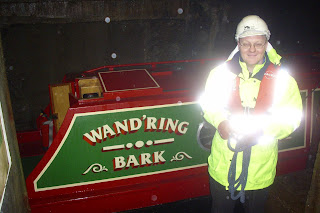 Boats progress through the tunnel in a relay, with four stops at cross passages to the disused small bore railway tunnels called adits. These adits are equipped with phones which allow the chaperone to contact base and confirm their position. When the boat in front has reached the safety of the next adit we can set off, relaying our way down the tunnel and never too far or close to the craft in front and behind. The last boat is trailed by the BW van. This is a good system except when Fred forgot to call in at the first adit and we were all waiting to set off, unaware that he was already half way under the mountain. Our departure was marked by much honking and cheering from the three "Lancashire Lads" on Bufta Drifta, who had no problems with ballast on account of the copious supplies of beer stored in the bilges.
The canal tunnel is actually the first and smallest of four parallel tunnels, with two small single track disused railway tunnels to the south and one large two way live railway tunnel to the north. This combination of tunnels helps maintain good ventilation and provides an access route for support vehicles. The canal tunnel proved to be a major asset when the other tunnels were being dug, giving easy access and a means of extracting the huge amounts of spoil via approx 50 cross adits. This close proximity of tunnels is a unique construction and one which is not without its problems. The intervening pillars of rock are barely capable of supporting the overburden and six monthly checks have to be carried out to monitor the tunnel deformation which is apparent in many sections.
The tunnel construction varies according to the rock it passes through. Sometimes it is a jagged hole of raw blasted rock in which the holes for the blast charges are as apparent as the day the explosives were detonated. Other sections have been reinforced with 2 meter rock bolts and sprayed with concrete. The rock bolt protrusions are a real hazard to navigation and your paintwork pays a high price if you catch one. Other sections are brick lined, but uniquely to this tunnel, Jack Arches are used. There are like narrow bridges which support the weight but have gaps in between them thus reducing construction costs by 50%. 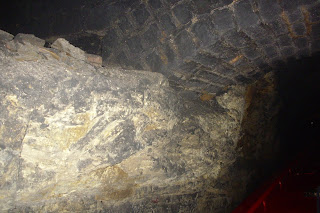 A few bumps and bangs are inevitable given the irregular nature of the tunnel walls, and I preferred to have a few bangs on the bows and stern that blows to my head by sticking it too far our over the side. We eventually emerged from the Marsden portal an hour and forty minutes after setting off with only minor scuffs to the hull, and none to the superstructure. BW were there in force, photographing the first boats through and interviewing the skippers to test their reaction, seeking ways the experience could be improved. Frankly, BW had done a great job which I couldn't fault. They were efficient, polite, punctual and enthusiastic. What more can you ask for? 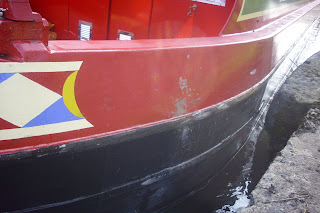 There are plans to install an ariel along the length of the tunnel allowing boaters unsupported access, with backup available via the disused railway tunnel if necessary. Having navigated the tunnel once I would be happy to go it alone with back up a call away, but I think I would prefer a chaperone for my first passage. When you are a mile and a half into a narrow bore tunnel the end would seem a very long way away in the event of a breakdown. 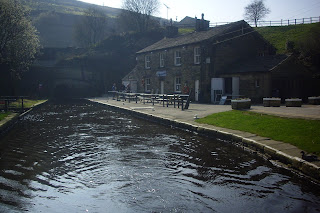 There was more to this day, but given the length of this entry I will document it in my next blog. 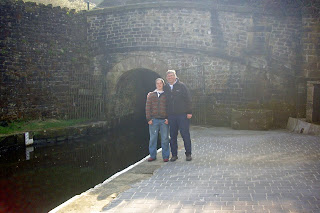 The dimensions for the tunnel are not very testing. I was followed through by a sailaway which had its bows reading high up in the air. The chaperones took it in their stride and loaded the bows down with two 50 gallons water tanks.
WB fits through easily.