South Pennine Ring - Millbrook to Diggle
2nd April 2009
Huddersfield Narrow Canal
6 Miles
13 Locks
5 Hours
Our mooring just before the Scout Tunnel proved to be a good one, quiet and peaceful with just a few dog walkers to keep us company. No boats passed either way, but then we hadn't seen any for the last two days so why expect any now? With a relatively short hop to Diggle there was no point hurrying, so we made an unusually relaxed departure at 10.00am. 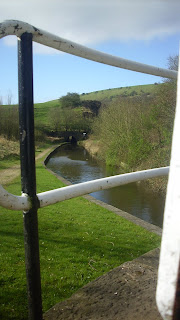 The Scout Tunnel was only one lock and 400 metres ahead, with its western end hewn out of solid rock and the eastern side lined with brick. BW were in evidence among the following locks, painting balance beams and making locking a tricky operation. Jeff managed to get white paint on his coat and trousers before realising the paint was still wet! 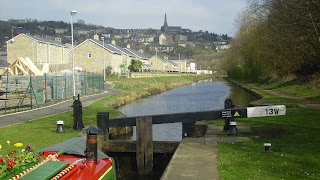 The first village of the day was a place which rejoiced in the name "Micklehurst Bottoms" - a fitting counterpoint for Canal Street the day before. Next, Mossley Brow appeared on the horizon, with its church perched high up on the hillside. Just before we reached Wharf Cottage Lock (13W) we spied our first boat, but hang on - it was a dutch barge called Itchy Feet sitting on the bank, and a wide beam at that! We were so surprised that we stopped to get a photo and before we had a chance to move on the owner / builder emerged to wish us well. As we worked through the lock the chap trotted up the towpath to introduce himself properly, Alwyn Ogborn, editor of Pennine Link the Huddersfield Canal Society's magazine and longtime enthusiast of the canals restoration. He extolled the splendour of the canal and fairly bristled with pride, virtually demanding that we visit the society's offices in Diggle and join up.We were given a potted history of the restoration, a back edition of Pennine Link and an explanation that he had built Itchy Feet from steel sheet. Not bad for an electronics engineer. His plan is to cruise the Leeds Liverpool and then set sail for the European waterways. 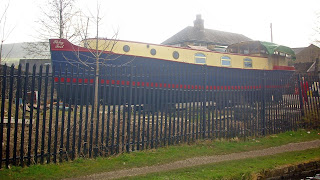 We enthused about what we had already seen and he confessed that whilst he is a Lancashire lad, the Yorkshire side is even better. If that's true I can't wait - I am already in love with the western approach to Standedge. Old cotton mills line the canal, some abandoned and some in use for a variety of non textile purposes. Many retain their towering chimneys - Dibnah heaven! 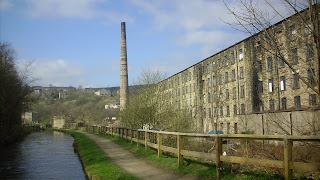 The canal was built on a budget and has a long history of landslips and this process continues. We encountered a particularly dramatic one between Gas Works and Division Locks (16W and 17W) where a garden has landed on the towpath. I bet the owners of the neighbouring properties (closer to the cutting) are sweating. 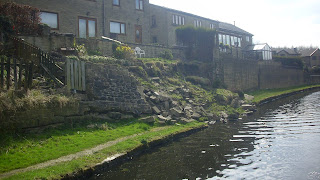 Saddleworth moor looms larger and larger with each lock and it becomes apparent that the canal is moving up a blind valley from which there is no escape. The canal continues to be very shallow, with the base plate of Wand'ring Bark skimming the bed and the prop churning mud all the way. Whilst there is very little rubbish in the canal, it is probably inevitable that we had to make a couple of trips down the weed hatch to remove stray poly bags. The bywashes hereabouts are wicked little affairs, entering the canal at right angles immediately below the bottom gates. This makes clean entrances an impossibility. Whilst there are very few moored boats on this side of the Pennines, we were interested to find a new marina called Friends Wharf at Shaw Hall. It appears to be part of a warehouse conversion project, complete with power hookups, but the whole site was mothballed and the marina entrance closed off. 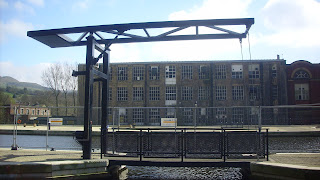 Saddleworth Fold is a village well worth visiting, complete with a museum and one of the very few water taps. The water pressure was huge and our nearly empty tank was replenished in minutes. Nb Marple was moored in the village awaiting repairs. Apparently she moored in Stalybridge and had her windows smashed. Confirmation that our decision to move on was a wise one. 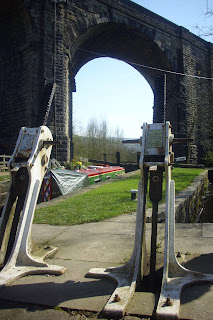 We arrived at the Dobcross moorings at 3.00 pm, as far as we could go before starting the final ascent to the Western Portal of the Standedge Tunnel. As promised, we made a pilgrimage to the HCS offices only to discover that Mr Ogborn has called ahead and the administrator was expecting us! I don't think that many people stride in and ask to join up. I had read a review of the society's HNC Towpath Guide in a recent edition of Canal Boat and, having received another endorsement from Alwyn, asked for a copy. It turned out that the author was none other than Dr Bob Gough, Administrator of the Society and the person sitting in front of me. The book is a little treasure trove and a must for all boaters - far better than Nicholson in this area where the canal dissapears beneath a smudge of black chevrons!. 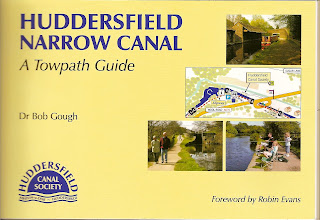 Whats more, we wanted to walk over Standedge Moor and the book provided a number of alternative routes that we would never have found on our own. More of this gem in a later blog entry. Bob is passionate about the history of the canal, and was only too happy to extract the historical photos from their reference library, showing me how things used to be. 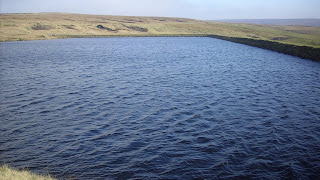 So, armed with Bob's guide Jeff and I packed a rucksack and set off to explore Standedge Moor and get a feel of the tunnel from the surface. After an hour and a half of huffing, puffing and exploring we emerged onto the Pennine Way, with western views over Brun Clough Reservoir towards Diggle and eastwards over Redbrook Reservoir to Frith Pule, a substantial hill which hides Marsden from sight. If anything it was this perspective shows off the tunnel at its best. This is perverse because you can't actually see it, but Bobs book shows its route, accompanied by three parallel railway tunnels stretching way into the distance in both directions. What possessed an engineer in the mid 1700's to climb up onto the moor and conclude "I know what, lets dig a tunnel 600ft down for 3.5 miles through solid rock". Audacious or what! 17 years and at least 50 lives later the task was completed. 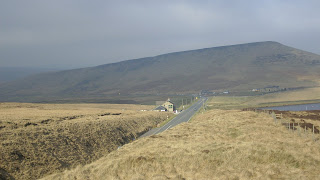 If you ever decide to pass through Standedge Tunnel allow half a day to climb to moors and consider the feat from this perspective. It blew our minds and enriched the experience immeasurably. But a word of warning, the weather can change quickly so go prepared with a decent map (Bob's towpath guide) and warm clothes. 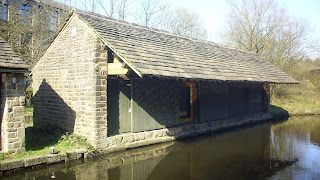 The mooring next to the Transhipment Warehouse (HNCS's headquarters) is quiet and safe. It even has one of the very few DIY pump out machines in the area - if you have a card.
Posted by Andy Tidy at 7:00 am