Following on from out earlier exploration of the northern reaches of the Cromford Canal, another opportunity arose to explore the next section to the south east of Whatstandwell and the Derwent Hotel. There is a lot of maintenance underway in this area including retaining wall reconstruction and extensive tree felling, which has resulted in the closure of the towpath. As there was no one working in the area, we sneaked a look around the barricades and were impressed by the amount of effort being invested in the Whatstandwell area. 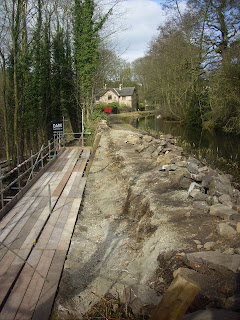 The first mile of canal is broad an open, if somewhat shallow due to reduced water levels and silting. There are a number of rather fine stone bridges including: Chase, Grattons, Poysers and Lime Works, all perfectly formed and well preserved. 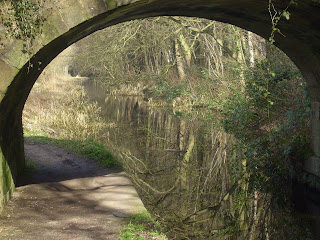 However, things take an abrupt turn for the worse as you pass under bridge 16a, a redundant railway bridge which now carries three huge water pipes. The canal quite literally disappears. One moment it is there and the next it isn't. There is a sturdy row of steel piling and then ... nothing, literally thin air! 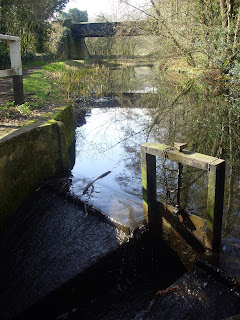 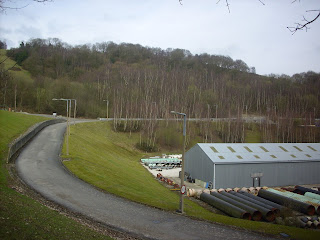 The map suggests that the canal bed has been destroyed, but that is a huge understatement. An enormous water engineering site has been excavated and built over the course of the canal, followed by a massive factory (now redundant) eliminating virtually every trace all the way to Bull Bridge, mid way between the Navigation Inn and the Nelson Pub. You can find a scrap of stagnant water but within a couple of hundred yards two residential homes have been built slap bang on the Grade 2 listed embankment which red onto the Bull Bridge Aqueduct, demolished in 1968. 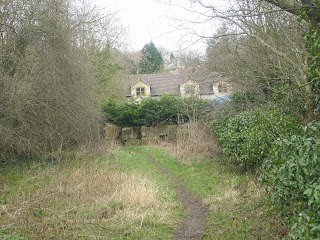 This mile of destruction represents the single biggest obstacle to restoration. A line could exist but it will take a lot of commitment on the part of the local authorities and restoration enthusiasts to see it realised. But a window of opportunity exists. In the main, the industry which occupied the line of the canal has closed and the area now lies in ruined desolation. My suggestion would be to caveat any redevelopment plans with a clause to say that a line for the canal must be included, possibly using the millions of tons of concrete and rubble generated by demolition work to create a sturdy embankment on which a channel can be built. Better an adjacent canal embankment than haul it to a distant landfill. 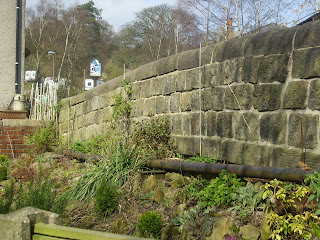 Following the line of the canal is challenging in the Ambergate area, but a network of footpaths exist winding over the hills and through the woods, which eventually lead you to Bull Bridge and then across the railway tracks and up to the dry remains of the canal bed at Sawmills. 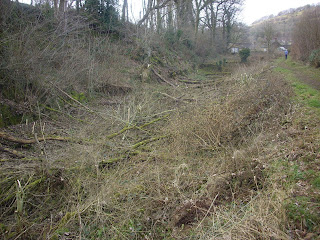 Whilst this stretch is devoid of water, the restoration team are hard at work clearing the undergrowth and, at the time of our visit, a Waterways Recovery Group work party was in full swing and doing a great job around Brick Yard bridge.

I was given a Friends of the Cromford Canal leaflet and was puzzled by the strangely familiar impression of what an aqueduct at Bull Bridge could look like. Puzzled, until they admitted to lifting the image from the Lichfield and Hatherton site and superimposing in onto their picture! The cheeky monkeys suggested that we donate the structure to them because" we will need it in water long before you guys do!" 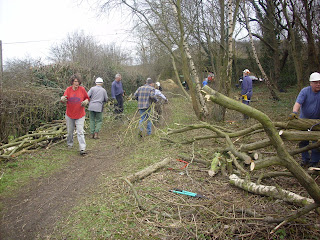 As Lichfield and Hatherton Canal Restoration Trust gave me free life membership due to my application being the 2,000th, maybe I will join with the Friends of the Cromford Canal and pay them the princely sum of £6.00. Don't worry L&HCRT - you will still get a donation as well!

The towpath continues in to the east, but sadly the canal bed has been sold to local homeowners as extra garden, causing another blockage to the line. However, the line of the railway runs parallel at this point and, being owned by the local council, could feasibly be converted into an alternate canal bed. This would take the canal to Buckland Hollow Tunnel, which is perfectly preserved save for the Excavator Pub using the track as a car park! 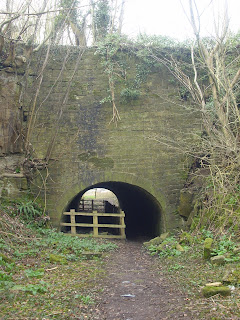 It took us a good couple of hours to reach this point, to we slaked our thirst with a pint and then retraced our steps returning to the car park just above the Derwent Hotel.

The varied terrain makes this a very interesting walk, and the complexity of the "missing link" adds an investigative edge to the enterprise. It may not be quite at pretty as the four miles from Cromford but the "spot the remains" aspect adds masses of interest.

Email ThisBlogThis!Share to TwitterShare to FacebookShare to Pinterest
Labels: Cromford