The Bark is Back

Wand'ring Bark returns from the first circuit of the South Pennine Ring of 2009
10th April 2009
Wand'ring Bark is back from its Pennine travels, and is the first craft to complete the arduous South Pennine Ring in 2009, including the inaugural day of self steer through Standedge Tunnel. When I say back, I mean that the Captian and his crew have returned - Wand'ring bark is still making her way back via the Peak Forest Canal with a relief crew aboard.
The closure of the Peak Forest canal forced us into a detour via Manchester and the 13 day trip involved 187 miles, 254 locks and 109 hours of cruising. The South Pennine Ring had a lock count of about three per mile for 9 days solid - and our backs ache!
I am too weary to do any more than down load my 300 photos and let you all know that we are safe and well. I have maintained a handwritten log of the journey and will post a record chronologically over the next few weeks.
There were many highlights, but special mention must go to:
1. The Huddersfield Canal Society and their passion for one of the most spectacular canals on the network. In particular, their work with BW to achieve the self steer experience through the Standedge Tunnel which was fantastic, and is a must for all enthusiasts.
2. The sheer helpfulness, enthusiasm and professionalism of the BW staff without whom the route wouldn't be possible.
3. The summit plummet experience from the breathtakingly beautiful pass at the Yorkshire / Lancashire border to the urban grot and deprivation of Rochdale and outer Manchester. 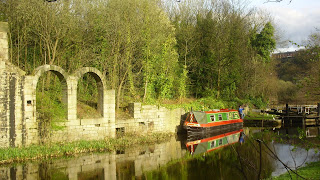 I will reveal all as we go along but for now here is a particularly lovely mooring on the Calder and Hebble Navigation at Woodend Mill Lock, which provided a ton of faced stone for a new water feature. What better way to carry stone from Yorkshire to the Midlands than in a narrowboat?
Posted by Andy Tidy at 10:27 pm