This is where the journey gets really interesting. From here on it is all new canals for the next ten days, a mouthwatering smorgasbord of waterways. Not only are they unknown to me but they are also relatively rarely travelled, compared to the canals of the Midlands with which I am more familiar. This is what the trip is all about.

Technically the Huddersfield Narrow doesn't start till you reach Ashton Lock (1W) so the first half mile from Portland Basin is still the Ashton Canal. Things start in an unassuming manner, creeping over some shallows beside large rock filled gabions, which half fill the navigation channel. With these obstacles overcome you pass under the "Asda Tunnel" a 166 yard culvert which quite literally burrows under the local superstore before emerging into a winding hole and the first of many locks on the circular route. 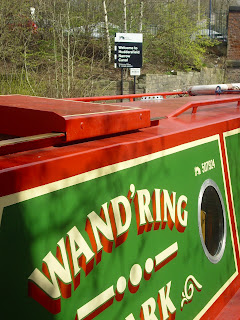 From the very start the Huddersfield Narrow asserts its unique character and by the time we reach the second lock I know that I have found a canal I am going to love. Not just today, but for years to come.

With the first lock came the first obstacle for the restoration team. The adjoining road had been widened to such an extent that there was no room for balance beams. The solution was a manually operated system of hydraulic rams which defied Jeff's initial attempts to gain access. With a considerable amount of effort on the windlass the Captain prised open one gate and then the next, all under the curious gaze of half a dozen local fishermen. The canal is like many restoration projects in the early days - navigable, but only just. The early lengths are both narrow and muddy, but pleasingly devoid of the rubbish which plagues the Ashton. All the locals displayed immense pride in "their" canal and were overjoyed to see a boat moving, and they want to see more.

Stalybridge is a revelation. The whole town centre has been remodelled in a brave step by the local council, using the exhumed canal as its centrepiece. There is no "creeping through the back end" of this town. The new locks lift boats right into the central area and provide a spectacle to the many locals who sit on benches or lean on railings to watch Wand'ring bark pass by. Just after the town centre a mooring exists literally beside Tesco's front door - closer than the nearest car parking bay. 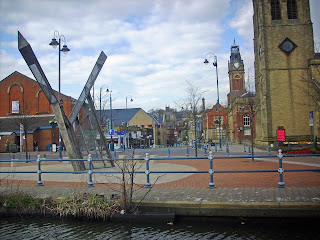 Every bridge in the town bore the date 2000 - the town must have turned itself upside down to accommodate the restored canal. The canal guides wax lyrical about Stalybridge's transformation but seeing is believing. It's a textbook case study for the benefit of urban canal restoration. It's now eight years since the grand reopening and the canal surrounds have moved into a sort of in between stage, where it is no longer fresh and new but has yet to acquire a patina which comes with age.

Whilst we resupplied at Tescos, the central area was devoid of boats so we elected to move on a bit for the night. We pressed on, dodging the odd low hanging branch and floating log, slowly creeping up the valley of the River Tame.

Many of the locks are deep and, like the adjoining Peak Forest Canal, made of huge stone blocks. BW elected to make widespread use of hydraulic paddle gear which is never a favourite approach but in this instance proved reliable and relatively easy to operate. An unusual feature of the canal is the unique "pepper pot" breather holes either side of the ground paddles. There were an innovation dreamt up and designed by the Huddersfield Canal Society, and adopted by BW. Rumour has it that if you stand on one whilst the air is escaping you can play a tune. Try it next time you pass! 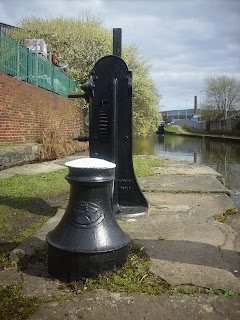 The channel remains narrow and shallow and even WB's modest 2ft draft resulted in many grounding and we churned mud all the way. If the channel is shallow the margins are something else. Mooring bollards have been optimistically placed above and below each lock but we failed to get anywhere near most and simply resorted to nudging the bows into the lock gates and getting off from the front. In some places the shallowness of the margins extended to three feet of dry ground!

Whilst the canal soon becomes semi rural in nature, it is not without its security issues. All the paddle gear was handcuffed and the burnt out shell of Jammarnie Jadie at the tail of Bywith Lock reveals a more troubled side. Bywith lock is an interesting section of the canal, rerouted to avoid an electrical sub station and threaded beneath the legs of a pre-existing electricity pylon. At this lock we met a local fireman, out with his family, who told stories of arson and vandalism in Stalybridge Basin and made us pleased with our decision not to linger overnight. 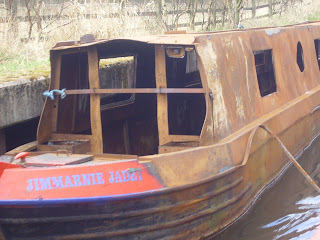 In the end we progressed to a spot beside a golf course, just above 10W - Avenue Lock, where the channel has been re profiled and offered a rare opportunity to get alongside the bank without grounding. This stretch to Scout Tunnel is particularly pretty with woodland on one side and the river and railway on the other. This is an excellent mooring - a million miles away from the trauma's of the anti capitalist protesters plaguing the financial sectors of London.

Another sunny spring day and another 24 hours without meeting another moving craft.