After steak and Old Peculiar I slept like a baby, the the cold evenings being a reminder that ,in spite of the unseasonal daytime weather, it was still early April. With the fire banked up for the night I fell asleep and missed most of the episode of 24 - requiring a further viewing, much to Jeff's irritation.
We woke to the sound of birdsong backed by a steady drumming. Not the bongo sort of drumming that emanated from The Stubbing Wharf function room last night, but an altogether softer but more persistent drumming of rain on a steel roof. With 24 stiff locks to navigatet oday this was bad news, but thankfully it eased off before we slipped our mooring ropes at 9.00am. I must have still been weary because as I looked back there was our front spike, standing tall and proud in the towpath, exactly where I had left it.
After Hebden Bridge the valley narrows, squeezing the road, rail, river, canal and houses together. Sometimes the towpath served as a back doorstep and at others access was only possible via cantilevered gantries extending over the water. The close proximity of boaters and residents could be seen as an invasion of privacy were it not for the scarcity of boating traffic. Just before Callis Lock there is another waterborne community, complete with the well tended "Callis Community Garden" and a Tee Pee (or is it a Wig Wam?) at its core. This is clearly a long established community of boaters and I suspect that they have a story to tell, were anyone awake to share it. 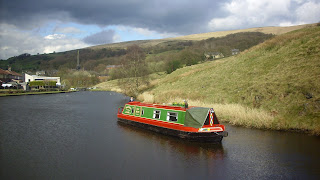 The Rochdale Canal runs broad and deep in this area, with an abundance of winding holes, either testimony to a busy industrial past or to give boaters every opportunity to abandon their ascent of what is described locally as the Himalayas of canals. At lock 14 we gained our first views of the moorland up ahead, and by the time we passed through Lobbs Mill Lock (16) the valley had widened out with industry giving way to farming, complete with lambs racing down to the waters edge. 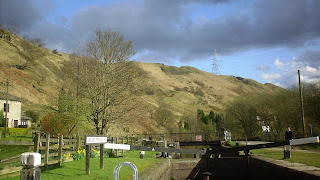 After seven days of relentless locking fatigue was setting in, and mistakes were being made. Yesterday Jeff pulled a muscle in his back as he tried to climb out of the bridgehole before the Salterhebble Guillotine Lock. I therefore bore the brunt of the heavy Rochdale locks, working probably 20 of the 24. I figured that he had better have a rest before we tackle the summit plummet back down into Manchester over the next two days.

The trans Pennine railway is a constant companion, with trains singing down the steep gradients and diesels groaning as they heave themselves up to the summit. This gradient became so severe that the freight trains struggled to reach 20mph on the run into Todmorden. Tod presented another challenge to the restorers, where road widening had again removed scope for conventional balance beams. 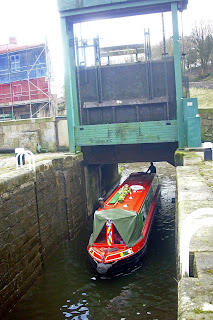 The solution was another guillotine gate which was mercifully electrified, although the sluice paddle was manual and called for 50 revolutions with the long handled windlass. With so little traffic moving we attracted interest wherever we went, and we completed Library Lock (19) under the careful scrutiny of about a dozen Todmordians. 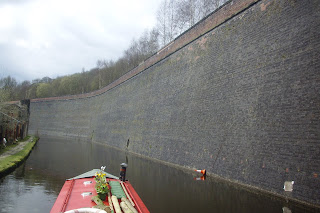 The town also lays claim to its own famous wall, the Great Wall of Todd, which was built to support the railway and falls sheer into the offside of the canal, consuming an estimated five million bricks in the process. The plan was to clear the five lock Gauxholme flight before lunch, but we were hit my a sharp hailstorm as we ascended the first, necessitating an impromptu stop at the landing bollards and sounding a temporary retreat to the warmth of the cabin and a bowl of soup. 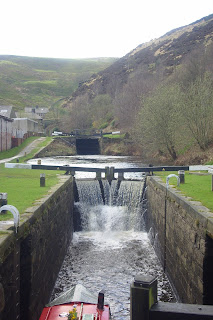 The Gauxholme flight carry a variety of operating instructions on the balance beams. Some you leave empty, some you leave full and others just havet o have their top and bottom paddles closed. The reason for this variety wasn't clear but we complied none the less. We were told at Standedge that BW has moved from traditional black grease to a new biodegradable alternative, and we assumed that the bilious green stuff which had been plastered on the lock gear was the new substance. It looks horrible - a sort of luminous lime green snot! Everything is plastered in the stuff and a thick wad of kitchen paper became as essential as a windlass. The Todmorden handcuff locks were mostly broken and twisting free in the wind, but the locals seem to respect the canal and we saw no evidence of malicious damage. 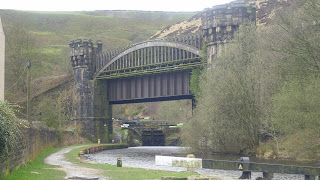 Water levels are erratic in the area and we found ourselves well and truly aground between locks 25 and 26, only reaching the safety of lock 26 by stealing a foot of water from the pound above. Whilst waiting for the locks to fill it was interesting to note that the restoration had used a sponsor a gate scheme> As a result we found gates bearing the names of big businesses like Marks and Spencer, Halifax and Nat West Bank. Its a good job they arn't tapping the government owned banks for sponsorship today. By the time we reached Bottomley Lock the trains had given up the battle of the incline and dived into a summit tunnel, but there was no such reprieve for the canal, which had another four locks to go before it topped out at 600ft. 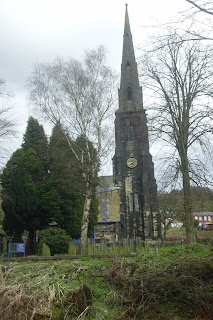 By the time we reached the pretty town of Walsden there were notices appearing telling boaters to turn unless a summit passage is planned. The locks now acquire an antique air, with vegetation growing from the mortar and the woodwork sagging and cracked. The canal feels out of its element, with increasingly strong gusts of wind blowing down from the pass ahead and side winds making navigation across the expansive pounds difficult. 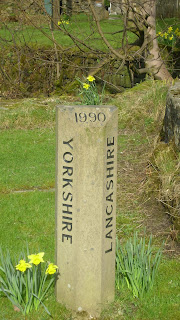 Finally, after eight hours we crosses back into Lancashire to reach the visitor moorings in the penultimate pound, where the wind rocked Wand'ring Bark too and fro and made her base plate grind against the underwater masonry. I placed a confirmatory call to Ray, the lock keeper assuring him that we would be up and ready to tackle the summit at 8.30am the next morning as planned. 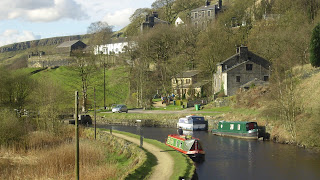 Email ThisBlogThis!Share to TwitterShare to FacebookShare to Pinterest
Labels: Rochdale