South Pennine Ring, Salterhebble to Hebdon Bridge
6th April 2009
Calder & Hebble Navigation and Rochdale Canal
10 Miles
15 Locks
8 Hours
In spite of it's apparent beauty, last night's choice of mooring was unfortunate. A factory stood nearby on the valley floor and its owners hadn't heard that there is a recession on. It remained operational all night emitting a steady mechanical drone, which in itself was ok. However, the drone was accompanied by some sort of pressure relief valve which clanged open every few minutes with all the subtlety of someone taking a sledgehammer to a sheet of steel. It didn't seem too loud when we moored up, but in the stillness of the night the sound echoed off the wall behind us and left us with a rather disturbed nights sleep. We should have continued right into Salterhebble. 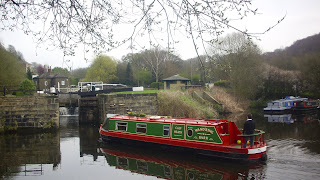 We were stopped in our tracks at the lower of the three Salterhebble Locks. A huge guillotine gate blocked our path and attached to the control panel was a note of apology from BW, stating that the mechanism was broken. Access could only be achieved with the assistance of a BW employee between the hours of 8.00am and 10.00 am, 12.00am and 2.00pm and 4.00pm to 6.00pm. A quick look at my watch revealed that it was 9.55 - but no one was around. Mobile phones are great things. One quick call and a relief lock keeper assured us that he would be down in 10 minutes. He arrived as promised, extracting my watermate key which I had unwisely inserted on the lock and hot wired the jury rigged hoist, which creaked and groaned lifting the heavy gate high enough for us to slide underneath. He then continued up the flight, setting the locks for us and refilling one the the picturesque circular intervening pounds to a navigable depth. The Calder and Hebble maintains its attachment to the hand spike right to the very end, and even the last lock can only be accessed using this crude instrument. 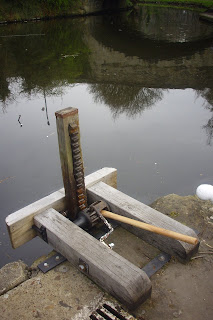 I can't resist taking a look down odd canal arms, and the Halifax Branch to Satlerhebble was too good to miss. It's only half a mile long but offers good moorings if you don't mind being beside the town sewage treatment works. There are more good visitor moorings on the mainline near the junction, but again they are blessed with yet more sewage works.
There then followed a three mile pound to Sowerby Bridge, the longest stretch of lock free water since the Standedge Tunnel. It is clearly popular with the locals as the local council were busy laying a tarmac surface. Everywhere we went we saw Yorkshire Terriers taking their owners for walks along the towpath. The canal narrows along this stretch, clinging ever closer to the hillside on one side and giving fine view of the rooftops of Copley on the other.
With our last pump out 10 days ago at Autherley Junction, WB was starting to list and in urgent need of relief. Apart from the DIY machine at Diggle there had been no services since Preston Brook, so a visit to Shire Cruisers of Sowerby Bridge was an absolute must. We met the Stevens family during our visit, who have owned the business for mny years; Nigel who kindly looked out a door catch from the stores; Susan, who accepted our cash; and their son who did the pump out and topped up the diesel tank. The amazing thing about this route is the amount of diesel you don't use. As you may have noticed, our typical daily mileage was between 6 and 10 miles, with the boat spending most of its time idling either before, in, or after a lock. As a result we used a mere £6 per day based on a 60:40 split. 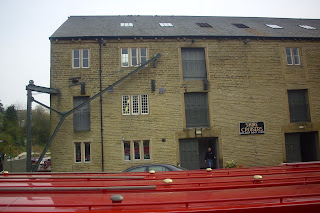 If you want to hire a boat to cruise these waters Shire Cruisers are the only show in town. So it's just as well that their fleet of 15 narrowboats are maintained to such a high standard. Eight had been repainted during the winter months and were so shiny that they actually squeaked as I walked along the gunnels.
After an hour or so we were ready to move on and, as recommended by the Stevens, we moored Wand'ring Bark by the bottom lock and walked up to see the lock keeper at Tuel Lane, and find out what was what. The strange thing was that after climbing up to the high street, the canal disappeared. Where there should have been a canal there stood a very solid looking pub. With a backwards look over my shoulder I figured that the canal tunnel must follow the line of the road so I ducked round the back of the pub and came face to face with the chasm. I say chasm because at 25ft, this is the deepest single lock in Europe and was the restorers answer to the problem of connecting the final 50 metres of the Rochdale with the Calder and Hebble - which became severed during abandonment in 1952. The lock is, in fact, two locks (3 and 4) combined and dropped the canal to a sufficient depth to get it under the main road junction via a cut and cover tunnel. 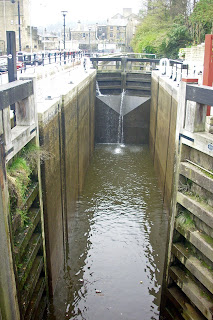 The lock keepers hut was like the Marie Celeste. Music was playing from the radio but there was no one there, not even in the loo round the back. Then I noticed the sign: "Gone to lunch - back at 1.55pm". Hmm, you can't begrudge a chap his lunch, so I wandered back to WB and prepared some pizza and garlic bread whilst we waited. 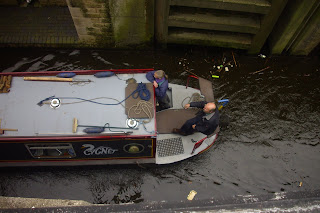 By the time the hour had passed two more boats had arrived, nb Dorothy out on loan for the first time and rising with us, and nb Cygnet, a smaller craft making a descent. Rob took the downward boat first, which was great because it presentedan opportunity to watch from the top, before adopting my own worms eye view. 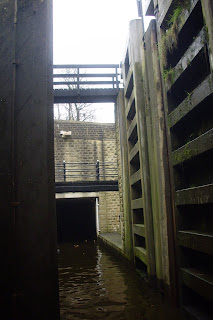 The massive depth of the lock makes BW assistance essential for the eight or ten craft which use it in a typical day. The record number stands at 20, but it's just as well there isn't much traffic. The chamber consumes 140,000 gallons of water and that is by using the "short gates". If a 70 footer passes through (less than 0.1% of the time) you can add a further 50,000 gallons making a whopping 190,000 gallons. That's nearly four times the consumption of a typical broad lock on say the Grand Union. Whilst BW has a three mile pound to draw on to fill this monster, the water supply is often inadequate and an arrangement exists with the EA to pump up from the river for 40 days per year free of charge, after which BW have to pay. That sounds a lot but when 10 days have been used by May its a real issue.
Rob was delighted to show off the lock and explain it's history, following the descending boat down and helping Wand'ring bark and Dorothy up the flight of three (or 4). Whilst the lock and its adjacent tunnel are impressive, the first intervening pound was terribly shallow and we both stuck fast on an evil smelling mud bank, only coming free when additional water was sluiced down.
And so we entered lock 2/3 and the "short" gates were closed behind us. On entering from the curved tunnel you are faced with a solid slab of shining concrete, the biggest upper sill you could ever imagine. Unsurprisingly, there are no gate paddles and the water enters without fuss through three apertures on each side of the lock, gently lifting you up 25 ft in just inder 15 mins. It is hard to provide an indication of scale of this lock, but the following view of Rob, peering down at us from the top gates may help. 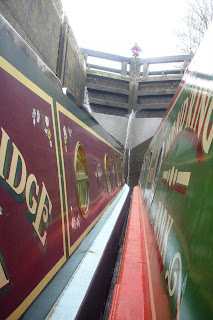 A little further on the skewed Falling Royd Bridge is worth of note, a modern "armco" construction so long that it could be classed a short tunnel. It's length is accentuated by the black paint applied to its inside turning it into a drain hole to hell. Shortly after you enter the Mayroyd Moorings. These make a welcome change after the miles of boatless canal we have travelled, and the local boaters all vie for superiority in the the elegance and creativity of their adjacent sheds. Some are so idiosyncratic that one appeared to me modelled on the sentry box from Chitty Chitty Bang Bang. 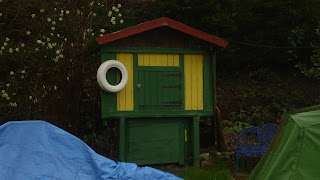 The lack of water on the Rochdale is nothing new. Most of the lock chambers were built with recesses for an additional set of lock gates, minimising water when used by a short Calder Flats. Whilst this may have been a good idea in theory, the recesses never contained lock gates and have now been redeployed to usefully house safety ladders.
We approached Hebden Bridge in a light Pennine drizzle, but this did nothing to dampen the charm of the place. The local residents we so pleased to see the canal restored that they took a unilateral decision to ban polythene bags, and what a difference it has made to the canal. Not a hint of rubbish anywhere. The town's commitment to the canal didn't stop at the bags they use. They have also reconstructed the central square to embrace it, and very pretty it is too - complete with new civic buildings and an expansive recreation area. 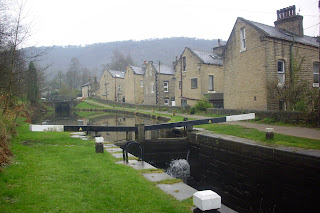 The houses are attractive too. Narrow streets sit end on to the canal giving boaters an intimate glimpse into the lives of the inhabitants. In some places the back doors open right onto the towpath, their sandblasted stone revealing a honey coloured hue which is in stark contrast to the soot blackened masonry of unrenovated buildings dotted about. A darker reminder of the areas industrial past
By the time we passed through Hebden Bridge dusk was falling and we were tired. So tired that I started to make stupid mistakes, like the paddle gear whose ratchet just wouldn't disengage. After 10 mins I despaired of my poking and prodding and was on the verge of calling BW, and then I realise that I had inadvertently applied the lock by depressing the button on the underside of the casing. Stupid or what!.
Acting of the recommendation of Rob, the lock keeper at Tuel lane, we moored outside The Stubbing Wharf and enjoyed an excellent steak, washed down with a couple of pints of Old Peculiar. An excellent gastro pub and an excellent mooring.
Posted by Andy Tidy at 7:00 am

Email ThisBlogThis!Share to TwitterShare to FacebookShare to Pinterest
Labels: Calder and Hebble, Rochdale