South Pennine Ring, Rochdale Summit to Chadderton
8th April 2009
Rochdale Canal
10 Miles
28 Locks
9 Hours
It blew a gale last night, with storm force winds howling through the pass causing WB to tug on her mooring lines, which has loosened as the level rose 12 inches from surface water run off.

I woke with a heavy heart. The evening had been spent exchanging texts with the relief crew and agreeing a swap over point on the Bridgewater Canal. There was no escaping the fact that the this epic trip was rapidly coming to an end and from now on it is to be downhill all the way: downhill geographically; downhill socio-economically; downhill scenically and worst of all; downhill chronologically. There are only two days left! Hey Ho, all good things must come to an end, but we still have two days of unexplored canal ahead of us... 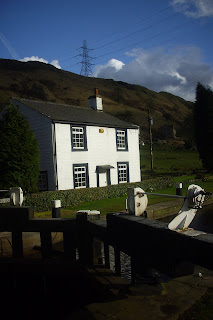 Ray McDonald’s silhouette appeared on the lock gates at 8.30 sharp, readying the lock for our use. We were advised that a Shire Cruisers narrowboat should have been following us up the Rochdale, with a view to crossing the summit. As they were a “no show” we didn’t hang around and entered the last eastern chamber at 8.40am – only the fifth boat to cross the summit since it opened at the beginning of March. Ray was one of three lock keepers when the canal re opened in 2001 but now he is the last one left, with cash hungry BW casting their eyes on his picturesque lockside house. Traffic is scarce and limited largely by the strictly metered water supply, which is just sufficient for two locks per day, and not a drop more. The canal used to be fed from a range of reservoirs in the surrounding hills, but access to this additional water-source was lost decades ago and BW is now at the mercy of their water utility provider. The summit is a mere half a mile long but was built to a staggering 8ft depth, and broad with it. This seemingly gratuitous size was not without a purpose. The width and depth was to compensate for its shortness and provide an additional reservoir of water. 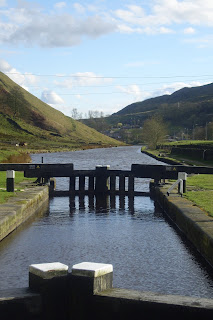 The summit passage is quite beautiful, with the heather covered hills sweeping down the the waters edge and the hills towering above, topped off with surprisingly attractive electricity pylons mounted on either side. Ray accompanied us along the summit pound with his two Corgi’s trotting along the towpath as fast as their diminutive legs could carry them. He then proceeded ahead to assist us down to lock 44, regulating water flows and ensuring that the precious water wasn’t wasted. This flight was built without by washes as a water saving measure, and as a result the contents of one lock will often flood the next one down. This feature explained Rob’s attachment to his wellies. To mitigate this risk of flooding the locks are limited to one very baffled paddle, extending the emptying time to an interminable 20 minutes. Progress isn’t fast, even with BW assistance. 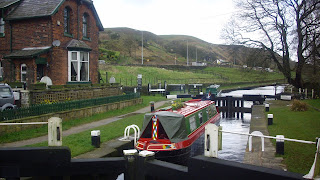 We parted with good wishes from Rob and a suggestion that we make for the aqueduct beyond Lock 63 – the last safe mooring before Manchester. As his parting shot he wished us luck and advised that when (not if) we encounter trouble around Rochdale we call the Police first, then BW – not the other way round. Not a confidence inspiring send off. 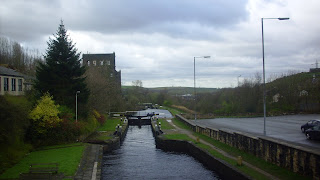 Our journey from east of the summit to Littleborough, the start of bandit country, had taken us three hours during which time the scenery and general interest quotient of the canal had been extraordinarily high. This was all set to change.

The wind continued to whip up the valley, spinning the windmills beyond Rochdale into a frenzy, and hopefully keeping any undesirables tucked away indoors with their games consoles and DVD’s. All went well through Littleborough and Smithy Bridge beyond it, although we did pick up a fleece on the prop as we exited Little Clegg swing bridge. This was quickly cleared and we pressed on towards Rochdale itself. 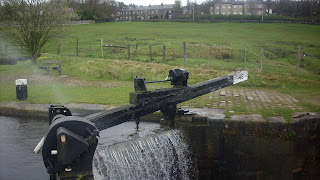 Mindful of Rays’s warnings, we kept a weather eye out for possible trouble and before we had even reached the outskirts of Rochdale trouble found us. At Newbold we spied a gang of lads cavorting around the towpath half a mile ahead, messing around and chucking stuff into the canal. Time for urban hot spot mode – one on the boat and one on the towpath. Jeff steered the boat steadily down the cut with the Captain marching his 6ft 3in frame down the towpath, windlass in hand. The boys had scurried up behind a bridge parapet, fully stocked with an arsenal of stones. I emerged from beneath the bridge about 30 seconds before the boat, rounding on the lads, camera in hand. “How about a photo for the family album lads?” With looks of horror on their faces and their plan in tatters they fled, chucking their ineffectual stones over their shoulders as they went. “Well done, and welcome to sunny Rochdale!” proclaimed a lady dog walker, who had witnesses our expertly implemented flanking movement.

With the Rochdale Cowboys bypassed, I continued to shadow Wand’ring Bark right through Rochdale, keeping myself between the boat and our potential attackers. Imagine my relief when the Deepdale Swing Bridge was unlocked, giving me time at get WB past and closing it again before the lads were able to catch up. 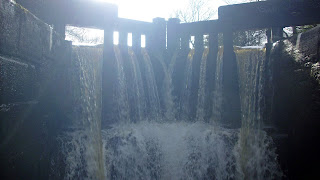 I like to find the positive in the places I visit, but Rochdale from a canal perspective really is a mess. They clearly made an effort to clean it up for the grand reopening, but the squalor of the area has reclaimed the cut, filling it with putrid rubbish. The two locks in town were equally unpleasant, with paddle gear no so much inoperable and completely missing - probably sold to the local scrap metal merchant. The housing ends as you reach the town centre and thereafter the canal is lined by the more acceptable face of industrial units, allowing us to relax and lower our guard when we reached the three Blue Pits Lock. Basically, Rochdale is a six mile corridor of filth and danger, best navigated early in the day and out of school holidays. 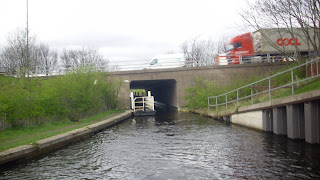 By way of recompense, the canal then offers a very pleasant stretch down to Chadderton. First up is a technical bit where the canal worms its way under the Motorway using an ex road bridge complete with its floating towpath, deviating from its original line through Blue Pits New Lock. This unassuming concrete chamber formed the battleground between the infamous Farmer Jones and BW, with an angry Mr J first taking a chainsaw to the balance beams and then a JCB to the embankment. Both actions temporarily closed the canal and nearly landed the worthy farmer in prison. Things seemed to have calmed down with steel gauntlets added to the balance beams and the breach repaired. I was explaining all this to Jeff when who should drive over the access bridge but the man himself, with Jones Turf Supplies emblazoned on the side of his van. 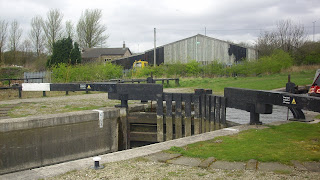 From here on the canal achieves an air of semi rurality, with light industry on one side and grazing on the other, leading to the the Slattocks flight with its six well spaced locks. Aside from the section immediately below the summit, this is probably the prettiest bit on the west of the Pennines. The locks may be attractive to the eye but dangers lurk beneath the water. Some of the old chambers are badly deformed and rocky projections abound, waiting to catch unwary boaters. 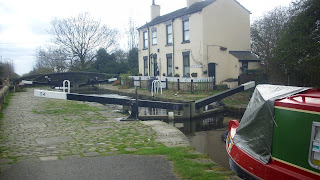 We finished for the day at 5.30pm, mooring on a newly rebuilt stretch of wall just before the River Irk Aqueduct. BW recommend this spot over and above the Rose of Lancaster, which is the more usual rostering point for the descent into Manchester.
As we were cutting logs on the towpath we were stopped by an elderly dog walker, who seemed to be bursting to ask a question. "Why, after all the millions of pounds that have been spent on the canal, don't we see more boats?" He explained that his mother used to tell him stories of commercial boats working the canal before the second world war, and he has been so looking forward to seeing the same thing for himself. He appreciated that commercial boats were gone forever, but what about the pleasure craft? All this effort and for what? A mere handful of boats? 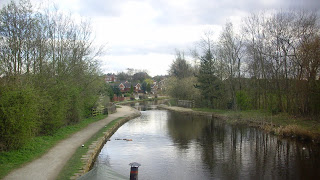 What does one say? The western side is hard work and not particularly beautiful, all with a an ever present threat of danger involving actual bodily harm. Add to that the water restrictions which limit the summit to four crossings per day and the need for a hefty BW chaperone into Manchester at the other end and it isn't exactly a recipe for a relaxing family holiday. I think I mumbled something like "hard work but worth it" and retired to ponder his comments further.
Why did we restore this canal?
Posted by Andy Tidy at 7:00 am

Email ThisBlogThis!Share to TwitterShare to FacebookShare to Pinterest
Labels: Rochdale