An unfortunate choice of words

Captain Ahab encountered some turbulence last night. There I was, sitting at my PC writing some narrative about a 2006 trip round the Cheshire Ring, plus a bit of reordering of my labelling system, zipping in and out of pages, when I noticed that my UK Waterways Ranking counter was clicking down.

When I started my ranking was about 38 and I didn't pay much attention till it reached 34, figuring that some other blogs must have had a low hit count a week ago. After 34 I was in uncharted territory and suddenly it stood at 29! then 28, 27 and finally 26.... what the heck was going on? 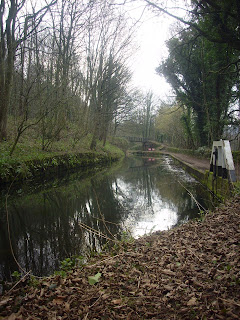 Cromford Canal near the Derwent Inn
I had a look at my sitemeter and much to my amazement a flock of visitors has descended on my Blog, and these hits were from all over the world - weird. I then took a look at my last posting and I suspect that that an unfortunate observation about Eeyore's state of mind may have been the catalyst. I won't repeat the works I used (but they could be construed as having an intimate interest in certain animals and a also well known drug). Whatever the trigger, I was inundated between 10.30pm and 11.30pm - and then, like a summer squall, they went away and it was as if they had never been. I will take a little more care with my proof reading in future. 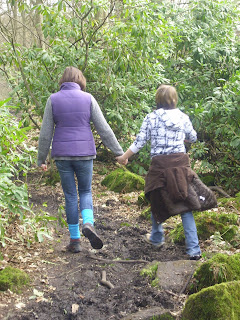 Today has been lovely and as we were in the Cromford region, Tilly and I decided to show Belle the canal. A month ago it was 0 degrees and snowing. Today it was 14 degrees and sunshine. Spring is here - Hurray! 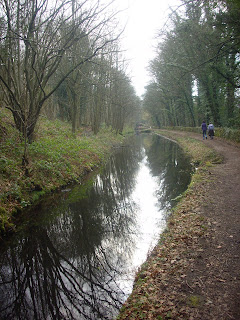 Spring is sprung,
The grass is riz,
I wonder where the birdies is?

You're not a poet. But Spike Milligan is. You have to get your attributions right, you know ;o)

The little birds are on the wing
Ain't that absurd?
I thought the little wings were on the bird.

I may have got some of it wrong, but I often use the first half of the rhyme! Nice to be reminded of it.