South Pennine Ring - Nantwich to Barnton
30th March 2009
Shropshire Union, Middlewich Branch and Trent & Mersey
25 Miles
8 Locks
9 Hours
We set off past Nantwich, flying over the rooftops of "executive" housing which has been built alongside the embankment. Unusual carved wooden object have been erected every few hundred yards along the towpath, mostly small and difficult to make out from a distance but the final one, opposite Nantwich Marina, is a stunning full sized representation of a shire horse. Truly magnificent. 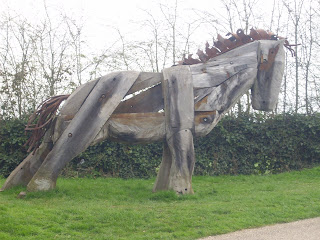 Just before this statue is the home of Empress Holidays and their fleet of very dated narrowboats. I hope they they are cheap because they look like an aquatic version of Pontins in the jaded, gone to seed1970's! Certain to disappoint.

From Nantwich the bridges broaden out to reflect the widebeam status of the waterway. Even the channel feels wider and deeper, allowing the boat to pick up speed and clip along at a good pace as we pass Hurleston Junction, gateway to the west. Hurleston is guarded by high earthen banks which hold the reservoirs of drinking water for the people of Nantwich and Crewe. From a boaters perspective they look more like a modern take on an iron age hill fort.

Belle decided that this would be a good opportunity to do a spot of running, and after taking instructions to turn left at Barbridge, she jogged off into the distance. We chugged along, past the many moored craft, turning left onto the 9 mile Middlewich Branch Canal, cutting across the grain of the land which a regular series of embankments over steep ravines and then cuttings through sharp ridges. With no sight of Belle for several miles I began to wonder if she was pounding her way towards Chester and came to a stop, wondering at what stage I should worry and think about turning round. Thankfully, just as I came to a stop she emerged round a bend in front of me and huffed and puffed her way back on board - all flushed with exertion.

The branch canal may have only four locks, but they built them deep - three descend eleven feet or more. 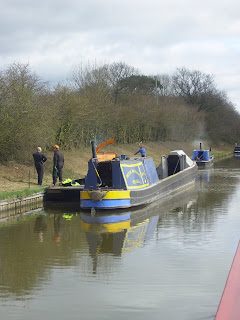 We encountered feverish activity in the cutting before Bridge 6, with both BW and the Shropshire Union Canal Society hard at work. BW were trimming back the undergrowth and using a wood chipper to fire the trimmings into nb Hercules. Sadly the chipper was angled wrongly and more chips were being blown into the canal than the hold! I suppose it makes unloading easier... Meanwhile the canal society, on a small flotilla of narrowboats were busy building a lovely picnic area complete with tables and chairs on concrete plinths. They were doing a great job, as they have done up and down the whole Shroppie over the years. 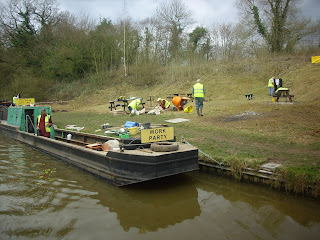 Lunchtime brought us to the hurly burly of Middlewich complete with a gaggle of new hireboats fresh out of Diamond Resorts, Middlewich Narrowboats and Andersen Boats. Andersen are by far the smartest fleet but I have a soft spot for the rugged work weary fleet of Middlewich narrowboats whose every scratch and dent seems to exude happiness of holidays past. Used and abused but much enjoyed.

We moored just before Big Lock, the first broad lock on the northern T&M designed to accommodate Weaver Flats, and went in search of provisions. The Fudge Boat had warned us of the closure of Somerfield so instead we hunted down Liddle who had most of what we needed. As we waited and waited for the Barge Lock to fill (the boaters coming up had forgotten to close a bottom gate paddle) we were joined by the hotel boat Away4aWhile, travelling light from Brimingham to Anderton to pick up new passengers. The two man crew were gaining a day of shore leave by making the passage in four 12 hour days. We shared the lock, BCN anecdotes and mugs of tea before striking out for Anderton, 9 miles distant. They made fast progress with their newly rebuilt engine, zipping past the various flashes with us trailing in their wake.

The Chemical plant at Rudheath hisses and spits its caustic brew much as it has done for a hundred years, which was more than could be said for the rather sad remains of the old Lion Saltworks which seems nearer and nearer collapse each time we pass. The ancient buildings are steadily decaying back into the briney landscape they plundered for so long. 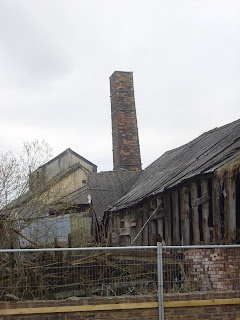 The rather smart ground of Northwich Victoria lies next to the canal, its prosperity probably more a testament to it also being the home ground of Manchester United Reserves than the skill of the team which bears the name of the nearby town. We parted company with Away4aWhile at the ABC base, recovering the tea mug and promising to meet up again in Birmingham. 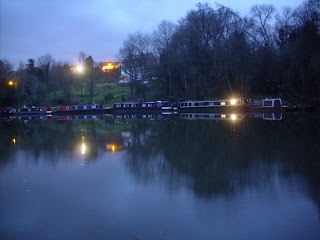 We pushed on through the Barnton Tunnel in the gathering gloom, mooring up in the delightful lagoon which separates it from its northerly twin, the Saltersford Tunnel.