There is always an edge of anticipation about visiting one of the wonders of the waterways world for the first time.

Today it was the famous Bingley Five Rise Locks, a stack of five lock chambers which butt onto each other end to end, facilitating a dramatic change in elevation. The slope is one in five and drops the canal 59ft only to repeat the trick a bit nearer Bingley with a  further three lock staircase. All in all the two flights drop you nearly 100ft. 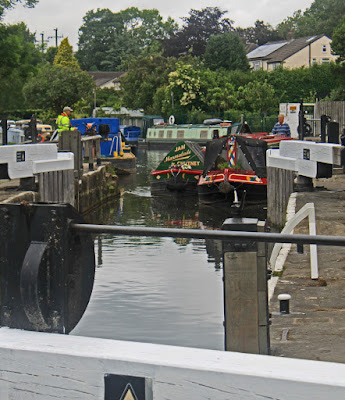 Whilst there is nothing particularly complex about these locks, it is important that boats ascending and decending are properly controlled or boats could meet in the middle and be unable to pass each other. Even worse, boaters could inadvertently flood a boat lower down, so both flights are tightly controlled by CRT lock keepers. 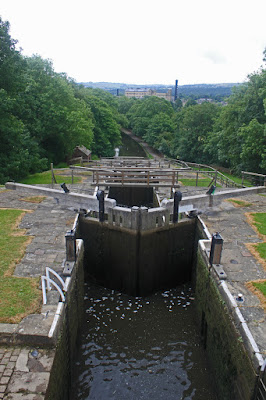 We rocked up at the top lock at about 9.00am and were immediately ushered into the chamber as two boats were approaching from below and would be waiting by the time we exited the bottom lock. With all the lock keeper support there wasn't a huge amount for us to do so Helen worked one side half way down and I did the rest. 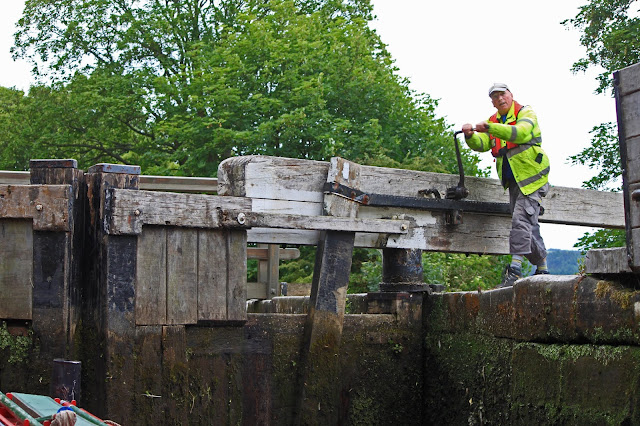 We often find the the enforced stops at locks results in the sale of preserves and our trip down the Bingley locks saw £30 go into the coffers. Such was the popularity of our offering I did ask if we could simply ride up and down the locks all day long! 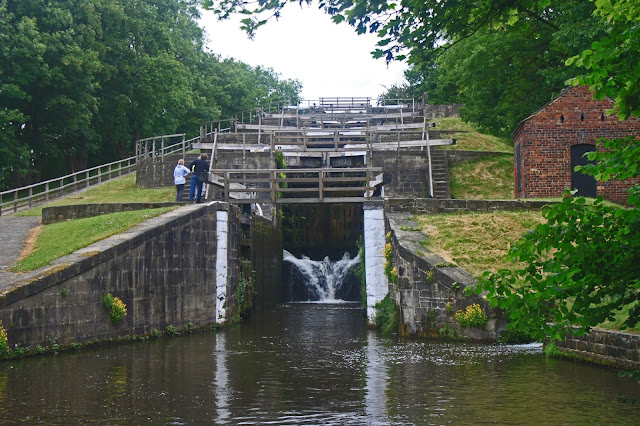 We arrived at the second flight just as two boats started up, so we moored and waited. Unfortunately Helen kind of fell off the back rail, catching the rim of her boots on the cockpit edging and landed very heavily on her knees on the engine cover. That pretty much wiped her out for the day with her knees swelling up like balloons in spite of the application of frozen peas. Lets hope she makes a swift recovery.

The plan was to stop at the bottom of the second staircase but one look at the mooring put me right off the idea. It is on the offside (useless for trading) and right beside a very busy dual carriageway. Instead we decided to go to Saltaire and moor on the towpath to the north of the mill. I had spotted  this location yesterday and figured there would be reasonable footfall.

With locks cropping up every mile or so we decided to leave the boats breasted up, a format which will probably remain in place all the way to Leeds or beyond.

With lots of people on the towpath I enlisted help wherever we could and steadily worked ourselves to within sight of the Saltaire mill. After a few attempts we found some deep water just to the north of the trip boat landing and immediately set up our sale boards together with the "ring for attention" bell. The bell boinged regularly through the afternoon and a good amount of sales were achieved. For the first time we but out a box of duck food and without trying sold a couple of pounds worth.

We are making good progress towards our passage through Stannage on Wednesday 27th, but are starting to keep a close eye on the ever changing situation on the Marple flight. The latest is that passage is limited to boats up to 45ft in length and with a one week closure the week after next to try and effect a temporary fix. All being well it will reopen just as we need to turn south after completing the Lancashire side of the Huddersfield Narrow. However, the pessimist in me says that the temp fix wont work and the flight will close for months. This would mean we have to descend the Ashton Canal and the Rochdale 9, returning via the Trent and Mersey. Not an ideal scenario but its probably do-able in time for Cosgrove Festival on the Grand Union on 21 / 22 July.

The Waterway Routes maps show the mooring below Bingley 3-rise on the offside so I don't know why you were considering stopping there.