By our reckoning this will be our sixth Blisworth Festival, and our second with the boats.

In the early days of Wildside we decided that canal based events would be our core market but with work getting in the way of extended boating, we were obliged to load everything into the car and be land based. Blisworth was that little bit too far to travel there and back each day, so we found a nice B&B which was a self contained apartment and made a weekend of it.

The problem with our migration to water was the popularity of the event. Far more traders wanted to come than there were spaces between the two bridges, so I devised a cunning plan. We had always had our stall of the triangle of land by Candle Bridge and it struck me that there was good 35ft of grassy bank immediately to the north of the weir. This was just perfect for the butty and the motor could be strung out over the weir itself. The idea was presented to the harbour master who jumped at the creation of an extra mooring where one had not existed previously. 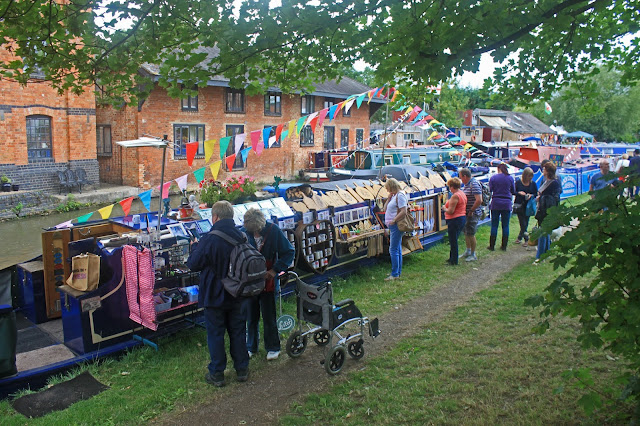 Mugs Afloat trading at The Wharf

The location also meant that we would be in our "usual" location and be easy to find for our regular customers. As a bonus the wide bit of grass allowed us to put the gazebo legs out onto land, which would be an issue further down the narrow towpath. This therefore became "our" spot.

This year the organisers had changed but to our relief the weir spot remained ours, but to our surprise the trade stalls on the triangle were no more. In their place there was a sizeable CRT tent, with the ice cream  van on the road. Initially this looked like bad news as the CRT stand had their back screen facing us but it actually all turned out rather well. The new open space was popular with visitors who came off the bridge and chilled out on the sunny bank whilst eating ice creams. This was good news for CRT who had lots of people to talk to, and excellent news for us as they all seemed to wander over to taste our wares. 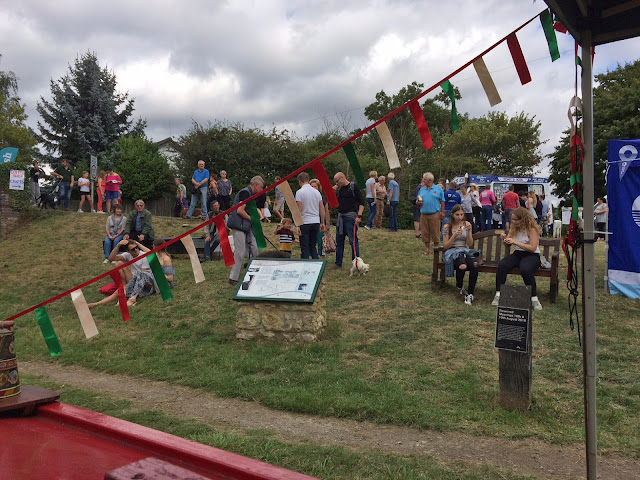 The new chill out zone at Candle Bridge

Another nice twist of the event is the fact that two of my previous London bosses live nearby and look in on us each year to see how we are doing.

The altered footfall dynamics assisted by mild, dry but not hot weather made for a great combination and our sales surged by about 40%. This was quite a result because over the last few years the sales had declined year on year to the point that we were considering alternative venues in mid August. In the event it was Blisworth back at its best. 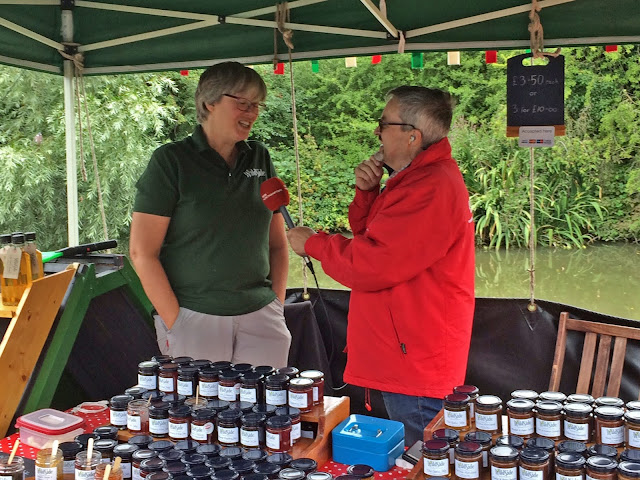 Radio Northamptonshire were broadcasting live on Sunday morning and we were asked to participate. Helen is far better at radio interviews than I am so she spoke to John Griff and enthused about jams, life afloat and life after cancer. He seemed well impressed and quietly confided in me that "she comes across really well on radio". Thats my girl!

The rest of the event was maybe a little smaller than in recent years, but none the worse for it. About 15,000 people attended on Saturday and a few less on Sunday. The new organisers were very attentive and actively seeking feedback so hopefully next year will see a few of the wrinkles ironed out and this popular Northamptonshire event go from strength to strength.