One Million page views and I missed it!

I have been keeping a vague eye on the blog page counter in recent weeks, knowing the number has been steadily creeping up to the magic one million mark.

I reminds me of a friend who took his girlfriend out in his ancient Morris Minor back in the 1970's for a "special secret reason'. The girl in question was fully expecting a proposal of marriage and was left feeling somewhat let down when he slowed he car and stopped at the roadside, pointing to the odometer which ever so slowly clicked over from 99,999 miles to 100,000. That was back in the day when 100,000 miles was a major achievement for any car. Oddly, I remember the story but I can't for the like of me remember if they did ever get married.....

It turns out that the blog has been getting a lot of attention in the USA just recently (I have no idea why) and as a result the viewing numbers accelerated suddenly and we appear to have passed through the one million threshold last weekend. 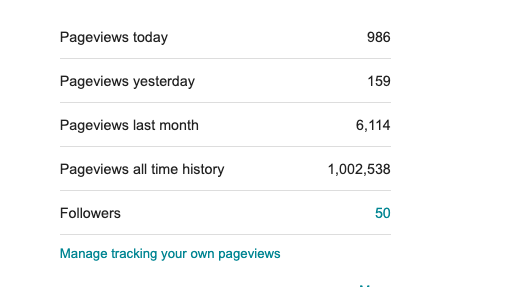 I know its only a number, but there is a little part of me that would have liked to been on line  when the milestone was reached.