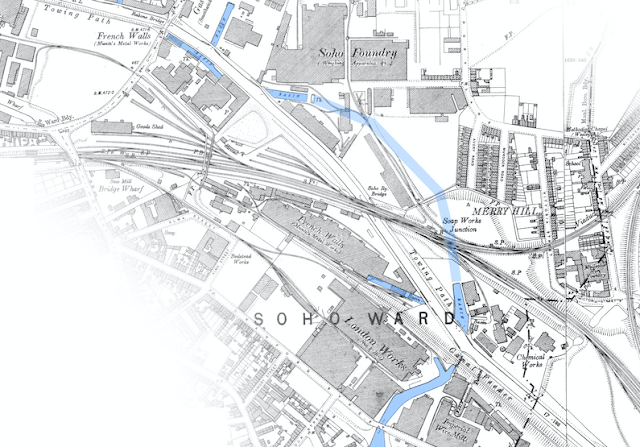 I have never been entirely sure what to call the last lost loop just before Smethwick Junction. For the sake of a better name I have always referred to it as the Avery Loop, a loop of canal created by the construction of the New Mainline Canal which looped round the old Avery Works, a contemporary of Matthew Bolton's Soho Manufactory


The northern entrance bridge reads into a basin dug by Avery's in 1936 and is at a slight angle outside the original line of the loop canal. 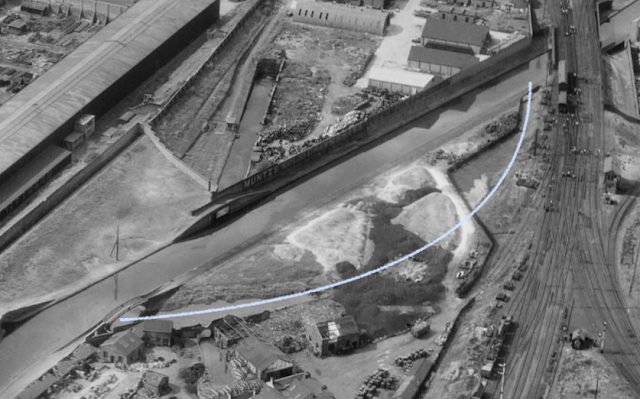 The complete line of the loop in 1937 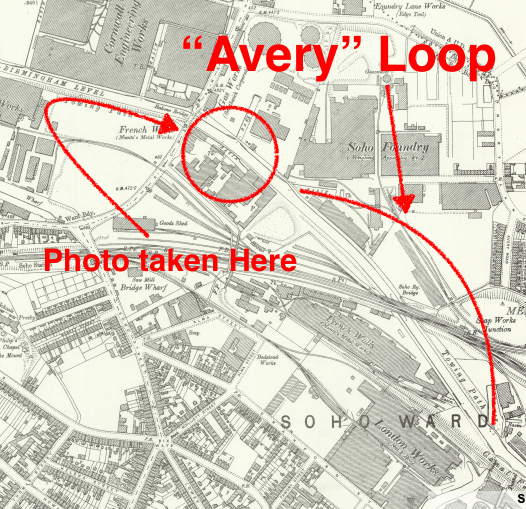 Immediately opposite, near Rabone Lane there is another blocked up canal arch which is framed by yet another rise and fall in the towpath and backed by modern factory building on Steelbright Road. 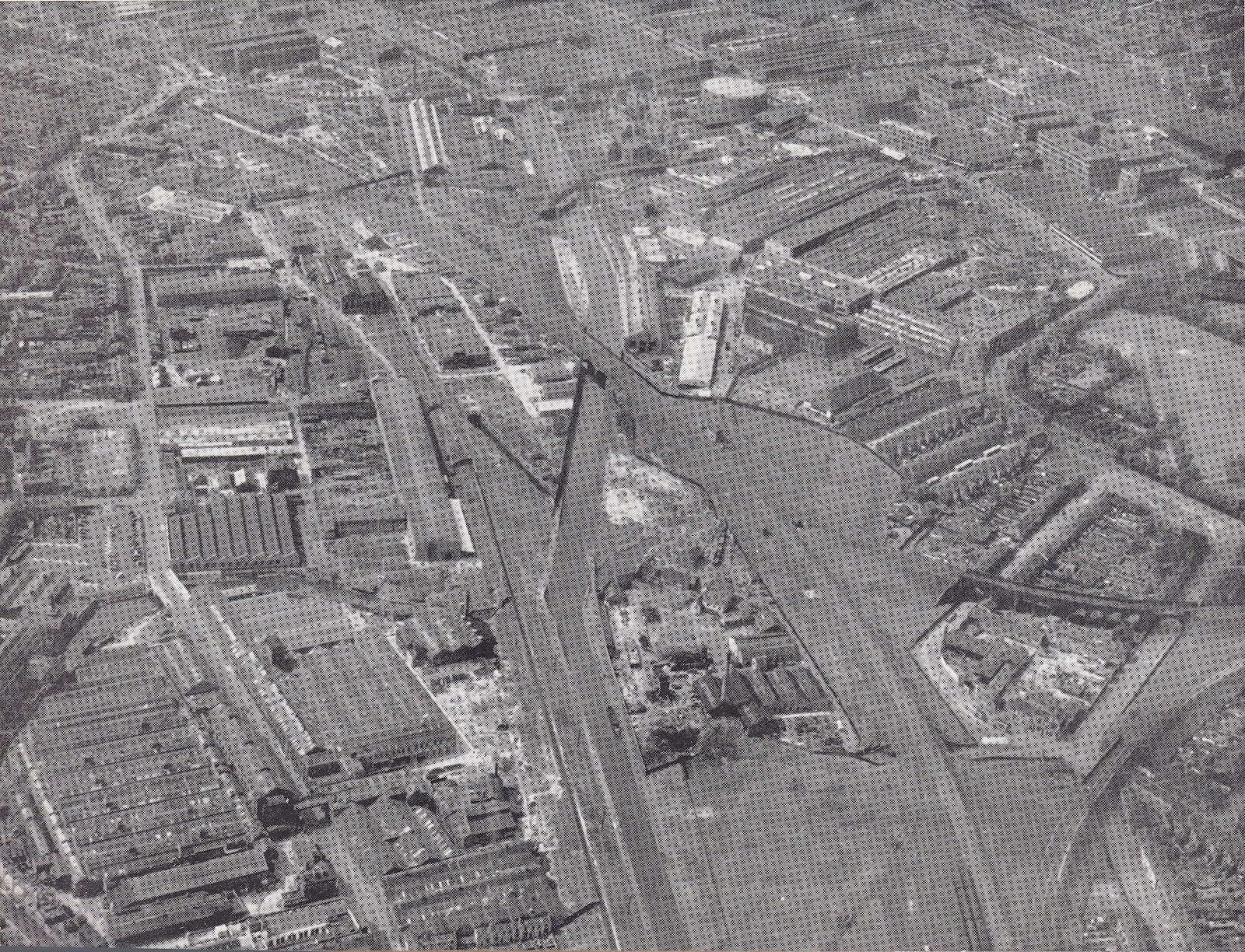 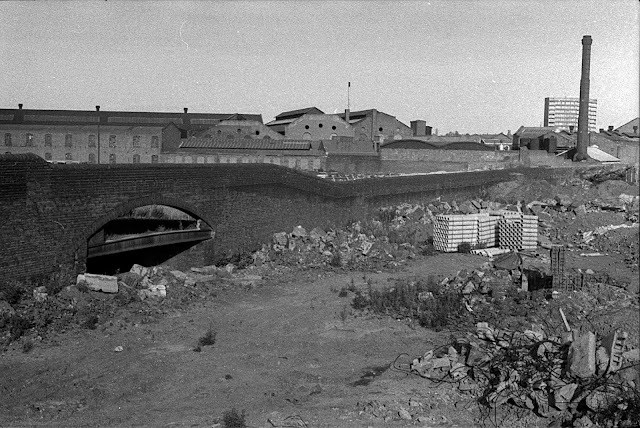 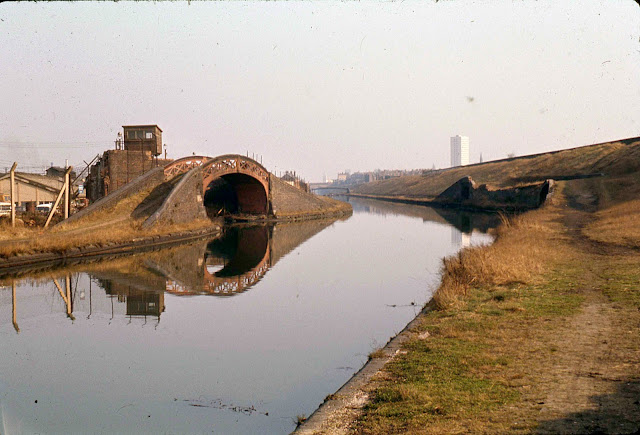 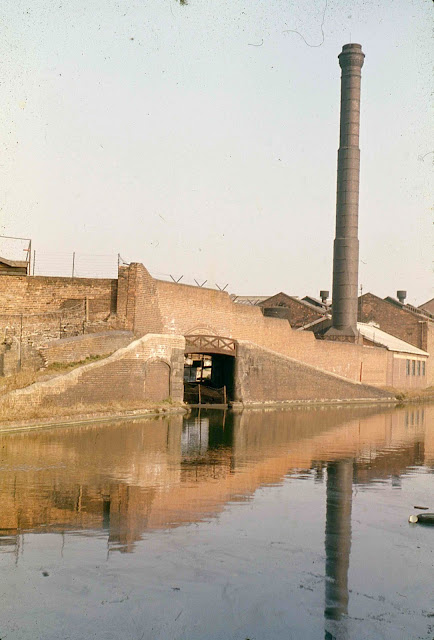 Northern entrance to Avery Loop 1973 - Hugh Potter
Among Hugh Potter's photos of the area taken in the early 1970's, there is one image taken from behind the wall and looking across the canal towards the site if the Avery Works and the site of the Soho Foundary, with the distinctive chimney and stepped wall still visible.

The southern entrance in 1937 (foreground)

Just to the north of the Avery Loop is Rabone Bridge and the start of the lost Rabones Loop, accessing the Cornwall Works. This was another shallow loop to the east of the mainline canal which is now completely built, over but even in the mid 20th century it remained navigable and was referred to by the boatmen as "Tangy's Hole" accessing the works of Walton and Browns. This loop had no towpath and the old coal boats had to be shafted in and out by hand, and the coal shovelled over a wall into the works yard.

I think there are some inconsistencies in the Avery Loop section. The first image, the 'Soho Ward' map of the Avery Loop, shows that the (later) railway line crossed the line of the loop at a place marked 'Soho Works Junction' (a railway junction). From the south-east, the Cape Loop led directly to the 640 yard (0.58 m) Avery Loop. The central section of this loop was filled in, probably when the railway line was built, leaving a basin at each end, as shown on the map.
The second image in the Avery Loop section, which is captioned 'The Complete Loop', has a accompanying text which suggests that it is taken from the north-western end of the loop, looking south-east. The third image, an annotated map of the loop, reinforces this impression. The second image photograph has a white curve superimposed, presumably to represent 'the complete loop'.
However, my interpretation of the photograph is that it is taken from the south-east end of the Avery Loop, looking north-west. The accommodation bridge at the bottom left corner of the photograph carries the mainline towpath over the north-western end of the Cape Loop. The accommodation bridge diagonally across the main line bridges the south-east remnant of the Avery Loop. The short basin, running from the mainline towards the top middle of the photograph is the basin into French Walls (Muntz's Metalworks) shown on the map just above the word WARD. The white curve does not show the complete loop. In fact it is not the canal line at all, which would have passed below the signal-box on the right side of the photograph. Note that the fifth image in the section, captioned 'The Southern Entrance in 1937 (foreground)' shows pretty much the same view as the second image.
I have some further thoughts on 'Tangy's Hole', which I believe is not the former Cornwall Works Loop, but the basin shown inside the red circle on the third image that runs parallel to the main line. I believe this is a remnant of a shallow loop (I'll call it the French Walls Loop) that ran from the north-western end of the Avery Loop to Rabone Lane bridge. The Cornwall Works Loop was clearly a continuation of the French Walls Loop on the other side of Rabone Lane.

nch deserves aFurther to the question of 'Tangy's Hole', I suspect that the fourth image in the Avery Loop section, captioned '1974 View from near Rabone Lane towards the Avery Arm (Hugh Potter)' shows the the accommodation bridge over the south-eastern end of what I have called the French Walls Loop'.
Travelling from Birmingham towards what is now Smethwick Junction, seven loops of the original Brindley canal were cut across by Telford's New Main Line. The first loop was Oozells Street, to the left of the new line. The New Line then shared the route of the original line as far as the Icknield Port/ Rotton Park Loop, also to the left of the new line. Loops then alternated: After the Icknield Port Loop, the old line swapped to the right of the new line as the Soho Loop. The old line then swapped to the left of the new line as the Cape Loop, then to the right as the Avery Loop. It then swapped to the left as the French Walls Loop and. as it passed under Rabone Lane, switched back to the right as the Cornwall Works Loop. The Cornwall Works Loop seems to have been filled in immediately, judging by the plan drawn for the conveyance of land, dated 1828 (the sixth image in the Avery Loop section). This suggests to me that 'Tangy Hole' was the remnant of the French Walls Loop. The ends of the loop were cut off from the main line by 1903, the time of the map in image 3, leaving the central section of roughly 100m running parallel and almost adjacent to the new line, marked 'basin' on the map in image three.
The accommodation bridge in image four is skewed in such a way to suggest it spanned the south-eastern entrance to the loop before it was cut off. The central remnant became a basin accessed about halfway along its length, opposite a basin into the gasworks. The gasworks basin, 70 m long, lies at right-angles to the new line, on the right travelling from Birmingham. It is possible that the gasworks basin predated Telford's new line and originally joined the French Walls Loop.

The 1903 map (image 3) shows two basins into the Cornwall Works. These would have been on the right side of the new line, travelling from Birmingham. The one nearest to Rabone Lane, was nearly 120 m long, at right-angles to the new line. The second 'basin', only partly shown on image 3, was 460 m long and L-shaped, consisting of 240 m running at right-angles to the new line followed by a near right-angled bend and a further 220m. Working from Google Earth, this would have crossed Cornwall Road where the blue and white gates now lead into the yard of Bonnell Industries, turning right at the back of the yard to run behind the warehouse of the Hawthorn Trading Company. The line is visible from Metro Way, running across the back of the MiGlass works.

Such a substantial branch deserves a name, but I am not sure what it was called. Perhaps 'Cornwall Arm'.

Steve
I suspect you have access to some much better maps that I had when I looked at this loop. To tell the truth I am not even sure it was called the Avery Loop! The curve was a best guess and even the 1900 maps are unhelpful as they show the line after the railway had cut off the central section.
The Tangy's Hole was an observation an old boatman offered, but it's entirely possible we were thinking about opposite sides of the canal. Thanks for the added input.

Andy
My suggested name for the Avery Loop would be the Soho Foundry Loop as the Soho Foundry has a longer history than the Avery Works. Whatever we call it, it was short-lived as a navigable loop once it was by-passed, since the railway soon ran through the line.
Steve