The Toll End Communication Canal was constructed in three phases, which we will consider in the order in which they were built.

Tipton Green Canal was dug in 1805, starting in central Tipton (now Coronation Gardens) and dropped through three locks to a point somewhere near what is now Watery Lane Junction – a distance of about ¼ of a mile. 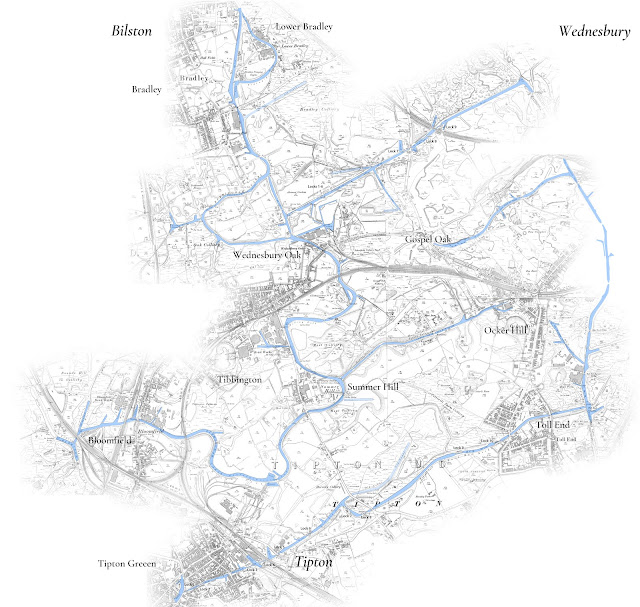 In 1806 it was extended by four more locks and a mile of canal to reach Cotterill Farm Colliery, where Horsley Iron Works grew on an adjacent site. This phase ran beyond the "kink" and the eastern third is shown as an abandoned canal on the 1902 map above.

Horsley Ironworks grew under the ownership Aron Manby from 1815 and was based on a colliery he owned at Tipton Green, near todays Tipton Cemetery. After building small ships (not an ideal location) he switched to constructing prefabricated iron bridges which are still seen all over the BCN and North Oxford canals. This business was later relocated to the new Dixons Branch built in 1828, which placed the ironworks close to the Horsley Colliery and also provided easy access to the New Main Line Canal.

The Boadwaters Canal (now the Walsall Canal) was built in 1786, and in 1801 a short side arm was dug including two locks to reach a new coal mine. This branch was known known as the Toll End Branch, passing through the hamlet of Toll End shown above.

Eight years later in 1809 the Toll End Branch was extended up the hill through two further locks and joined the mid point of the Tipton Green Canal, entering at right angles at the odd looking "kink". Taken as a whole the resulting through route became known as the Toll End Communication Canal.

New Main Line Canal (NML) was dug by Thomas Telford in 1829, separating  the original 1805 locks from the later 1806 extension splitting what had become the 10 lock Toll End Communication Canal in two, after which the longer lower section retained the Toll End name, and the upper element reverted to the original Tipton Green Canal.

This convoluted evolution is still confusing because the numbering sequence you give to the locks depends on the date you are considering. For the purposes of this record, I have gone for the complete one to ten option, which was the one used before the New Main Line was built. That said, it is quite OK to use the alternative of locks one to three on the Tipton Green and one to seven on the Toll End. Did I mention that one if the lower locks was moved.... well maybe lets not go there!

Links individual canals in this area: