A need for speed

Another first in my life, my first ever motor racing event.

One of my boating buddies had some spare tickets to the Silverstone stage of the Renault World Series and, knowing of Jeff's fascination with cars, offered them to me. 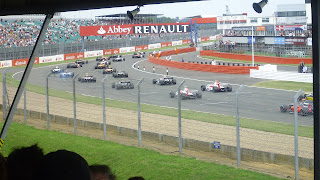 The start - the only time I knew which car was on the lead...
Never one to look a gift horse in the mouth I agreed and a plan was made to attend on Saturday 4th July. Sadly, events conspired against us when the clutch in Belle's car failed - on the way to pick up my Mondeo which had just had a new clutch fitted (bad luck or what!). I also had to get Wand'ring Bark to the boatyard for blacking, so the whole timetable went to pot.

However, it was a two day event and as we needed to be on the south coast on Monday morning a plan B was hatched. Actually this was a much more interesting schedule which allowed Jeff and I to go to Silverstone, Belle to indulge in some retail therapy at Bicester Village and then to move on to Oxford to pick up a new basin for Wand'ring Bark from Mortimer Bones. 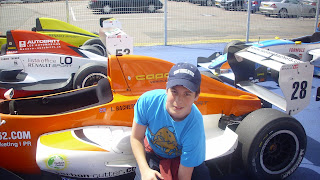 Jeff the racing driver
So what did I make of the motor racing? Well, to be honest I didn't really get it as a spectator sport. You plonk yourself down on a stand near one of the bends redolent with famous names like Stowe, Maggots, The Vale and Club and watch a gaggle of cars (is that the collective?) hurtle past you in a wall of sound and exhaust - and then they are gone, for about two minutes till they streak past again, sometimes in a slightly different order. With all the pit stops it is hard to work out who is winning, but the huge crowd seemed to enjoy it. I was impressed by the bigger racing cars, sort of Formula 2 size, whose passing was unbelievably LOUD. You don't so much hear them as feel them as your innards are pummelled.

An experience which was interesting, but not one which captured my imagination. I guess it served to get the nation's boy racers off the roads for a day or two - which has to be a good thing. 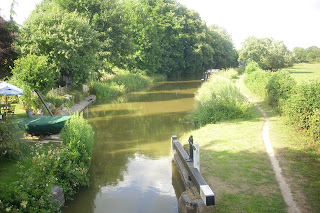 Tranquility at Shipton on Cherwell
Then on to Thrupp to meet Bones for the first time. Way back in February she mentioned that she had a spare basin going begging and it looked just right for the new shower room project. We promised to meet up whenever either of us was near the other, and this was the first time out paths crossed. We got to meet Bones, Maffi and the hugely entertaining Boots (Greyhound) - what lovely people. We shared some mugs of tea, replenished our book supply from the Cruising Club "library" and generally chewed the cud on a warm summers evening beside the cut. 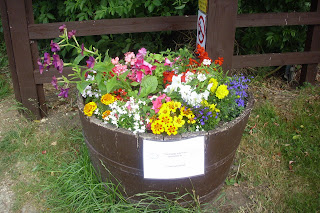 You get a better class of towpath decoration in Thrupp!
I guess that this represents the starting gun for the much delayed shower room remodelling. I have promised to have it finished in time for our passage down the Oxford Canal next summer which, on past form, may be a bit of a challenge.
Posted by Andy Tidy at 7:00 am

It was the full track in a tarted up saloon car, it was an amazing day of lesson..being taken round by a stig sort of chap, then off you go with stig next to you. It something I really enjoyed and am very glad I did, but a day on the cut is much more my thing.

Mr EB
Now a track day driving round the circuit whould be a completely different proposition!

LOVELY to meet you all! DO come again!!!!

Bones - we will be sure of it. It was great to see you and Maffi. Thanks for your hospitality, oh and the basin too of course.
I have measured up to install it and the project will unfold on my blog in due course, no doubt!