It's a quiet spot, moored between Great Haywood Junction and Great Haywood Lock, away from roads and railways with just the ducks and a few other boaters to keep us company.

With the morning free we decided to take a stroll around the Shugborough Estate. By around I mean right round it, as opposed to moseying around inside it. We donned our walking boots, packed our waterproofs, purchased an OS map from Anglo Welsh and off we went over the lovely packhorse bridge, which spans the Trent at its confluence with the Sow. The water was high after all the recent rain, a churning brown stream which covered the weir above the bridge as well as the single banks which are normally playgrounds for local children. Undaunted by the conditions, a family group were busy launching their canoes for a trip down to Rugeley. 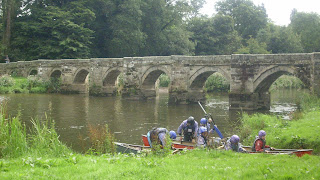 Our route led us across the front of Shugborough Hall, home of the late Lord Lichfield and then past the vernacular buildings of the Model Farm, which houses the living museum complete with bonnet'd "servants" making cheese in the dairy. Then it was on past the folly which doubled up as a gambling den before crossing the railway, sunken to appease the aesthetic demands of the Lord of the Manor. 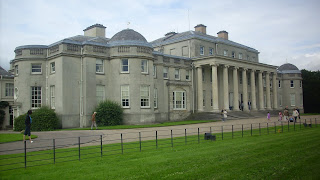 The route then took us out of the car park entrance and right along the main road, before striking out right again up a small and little used bridleway. This route leads up the the reservoirs which drew water off Cannock Chase for use by the hall before it was connected to the mains in the 1960's. The bridleway was surprisingly firm underfoot and a close examination revealed a sea of water washed pebbles. Strange to imagine Cannock Chase as a pebbly beach of a land over goodness knows what roamed. Its a bit humbling when you look at it like that.

As we made our way down to Midford the heavens opened amid great rolls of thunder and even the thickest chestnut tree could offer little in the way of shelter. We pulled on outrwaterproofs and hung around in the woods for five minutes or so before slithering our way into the village and over the railway bridge, offering a distant view of the Sow Aqueduct. From there it was a short stroll to the Staffs and Worcester towpath by which time the sun was out in all its glory.

There is an impressive house at this point, just above Tixall Lock. It is quite modern and not particularly beautiful, but it's gardens could easily grace the cover of House and Home. Its extensive lawns are manicured to perfection and, depending on the season, various bits of sporting equipment can be sen strategically positioned. Sometimes a carefully collapsed tennis net, or maybe some golf flags and occasionally a football 'casually' left in the same spot beside the swing beneath the spreading oak tree. I can't say I go to the placed accessories but the overall garden is something to behold. Shame about the hump backed bridge at which every driver toots his horn - it must drive them mad.

At Tixall Lock we met an ardent canoeist who, being unable to sleep, had set off on a trip down the Sow at 4.30am, reaching the footbridge at Armitage before returning to the Trent and Mersey via the pedestrian tunnel under the railway.

Tixall wide was serene but garlanded with the ever present rim of moored narrowboats. This is a popular spot which only attains a degree of solitude in the winter months. 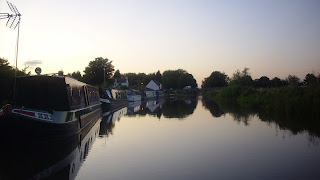 All in all a varied walk taking about an hour and a half, covering five or six miles, spoiled slightly by rain.