Stourport to Tibberton
Monday 20th July 2009
Staffs and Worcester Canal, River Severn and Worcester Birmingham Canal
19 miles
24 locks
9 hours
Dawn broke with clear blue skies, heralding a much better day.
Given yesterday's rumours, we approached Stourport with some trepidation, noting that all the boats that descended to the basins promptly returned, suggesting that the Severn remained impassible. 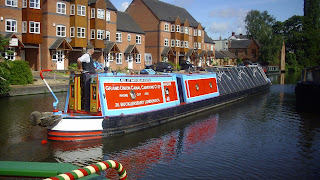 Notable among these vessels was nb Hadar, an immaculate replica of a Woolwich Short (or is a Northwich Short - I never can remember the difference!) which looked right at home alongside Scorpio and Apollo moored just above York St Lock. Hadar is a work of love on the part of her owner, who worked on an identical boat as a boy and had this craft built to the same spec in 2007, complete with a 1942 engine. It's only flaw is in its perfection. It caries too few scars to be a restoration project!
We motored through the various basins and round the back of the clock tower, mooring up on the floating pontoons and figured we may as well walk down to the rive and see just how bad the levels were. Much to our surprise and delight we saw that the water, although brown with silt, was down in the green zone. Some BW workmen were clearing the weeds from the lockside and informed us that it had been up 18 inches overnight but had, for the time being, fallen back down again. If we wanted to make the short trip down to Worcester there was no reason not to.
We hastily assembled our anchor bracket on the stern and dropped down the two staircases, negotiating the awkward twist between them. Whilst the Severn was flowing fast, with a good deal of fresh on, it was nowhere near as bad as our experiences on the Trent eighteen months ago. The upper Severn is remarkably pretty, rubbing up against high sandstone cliffs and surrounded by lofty trees. As we passed Lenchford we were buzzed by a Hawk aircraft and then we spied three Buzzards lazily spiraling up on the updrafts created by the cliffs. 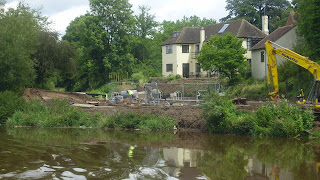 With all the gazing up we very nearly missed the work going on on the final lock of the Droitwich Barge Canal. To see the lock being reinstated complete with balance beams and separated from the river by a thin earth bank was rather exciting. This time next year.... Just above Bevere Lock we encountered a very strange Dutch registered suction dredger. There was much noise and diesel smoke but, for the life of me, I couldn't see what is was actually doing, or where the dredgings were going. All very odd. 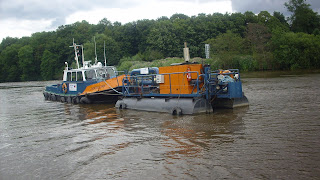 Then it was the final approach to Worcester, passing the racecourse and rowing clubs before sweeping under Worcester's ancient bridge. On the way down we passed nb Maid of Steel, which was pootling along. She seemed rather familiar and it transpired that she is normally moored at Chillington Wharf, a location I have passed many times! 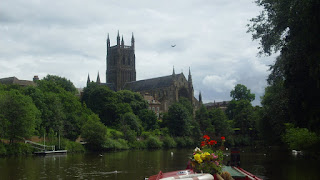 The two big locks up to Diglis Basin were undergoing something of a facelift, as part of the adjacent redevelopment project. It was one of the very few active building sites we saw on the whole journey. These locks are very, very sloooooow fillers.
We had made good time and moored above Sidbury Lock to spend a couple of hours wandering around Worcester. Whilst the city has its fair share of modern shopping centres, it has retained many of its more interesting nooks and crannies which reward exploration, particularly the magnificent Mansion House.
As you exit Worcester the canal is remarkably clean, with none of the urban detritus one usually associated with city waterways. Reeds line the margins and thick bands of trees mask the industrial sprawl which extends out as far as Tolladine and the infamous Worcester Rugby ground. 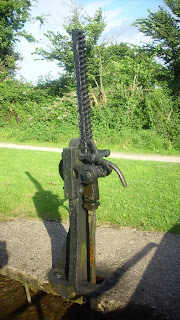 With the weather set so fair we pressed on, sipping our traditional Gin and Tonics and letting the evening sun warm our backs. We made light of the six locks at Offerton but at the top lock the canal passes so close to the M5 that the road noise is incredible. The local farm has resorted to the erection of a huge earth bank to try and deflect the sound, but even so the decibels are terrific.
In an attempt to get away form the road noise we moved on through the cutting to Tiberton, where the sound is masked by a low hill and a stand of trees. We dined at The Bridge all washed down with a very agreeable pint of Marston Old Orient IPA.
All in all an exceptional day covering a lot of new ground.
Posted by Andy Tidy at 7:00 am