Thursday 23rd July 2009
Worcester Birmingham Canal and BCN
15 Miles
3 Locks
6 Hours
Mooring just before bridge 69 was a good move. That extra half a mile and an earth bank deflected the noise from the M42, a road which drones on all night.
We had a late start at 10.00am and were straight into the 2726 yard Wast Hill Tunnel, a wide brick lined bore which is very wet in places. Whilst the tunnel features in the top five for length, it ranks nowhere near as highly in my list of favourite tunnels. Like the nearby Netherton, it is very wide and straight but frankly somewhat boring. The most interesting thing about out passage was that we got about a hundred feet in before I realised that far from my eyes taking a long while to adjust to the gloom, the tunnel light wasn't working! After a few moments of panic I realised that in his enthusiasm to suck the marrow from the moment, Jeff's arrival has included a heavy bump against the switch panel!
Wast Hill is a watershed in more ways than one. Not only does one cross from the Bittell headwaters to those of the Rea, one also makes a dramatic transition from rural to urban. From the moment you leave the northern portal of Wast Hill, the industry is incessant. 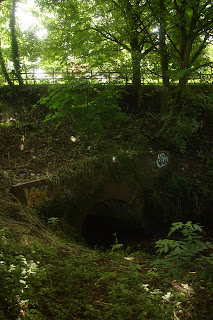 Along the way we picked up another bonus aqueduct as the River Rea flows under the canal near Kings Norton Junction. The juvenile river ripples through a brick lined arch, which lies at the foot of a lofty embankment, all shrouded in trees. Access is very difficult and my enthusiasm for my task very nearly landed me in the drink! 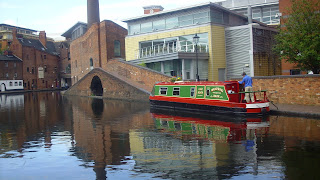 It was then a steady six miles into Birmingham, passing the extensive grounds of Birmingham University, complete with its unique hydrogen narrowboat. Once in Gas Street Basin we moored under the glittering tower of the Hyatt Hotel, where Belle found a taxi to take her home. Whilst there I took the opportunity to tap on the roof of Mr David, purveyor of rather splendid hand made cards. Brenda was out and about, but David was in, serving me a mug of tea and allowing me to rest my posterior in a chair which recently graced the derriere on none other than Nigel Kennedy.
With out 21st wedding anniversary upon me I selected one particularly fine card which, given its boating provenance, was a big hit with Belle. Thanks David and Brenda - I owe you one.
David is also something of a wizz with cameras and, with my 30th anniversary gift from my employer literally weeks away, I was very thankful for the advice offered. Olympus city here I come.
With the worst of the showers over, we struck out for Tipton but, in spite of my promises to Jeff, I couldn't resist taking in at least one backwater. This time it was the Soho Loop which earned me a prop full of poly bags. Then it was the New Main Line all the way to Factory Locks. Travelling the BCN in school holidays always makes me nervous but, in spite the the place crawling kids, they were all ok and gave us no bother at all. Jeff sniffed and accused me of being a suspicious and cynical old man. 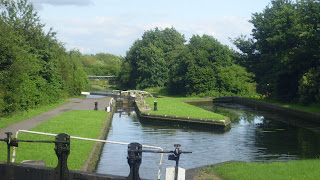 Travelling with Jeff isn't all fun. With all the teenagers around he was insistent that I mustn't stop at the three aqueducts which run beneath the canal at Dudley Port - spoilsport. Never mind, they will still be there another day.
We made it to the Black Country Museum only to find it a bit full and out favourite makeshift mooring on the bridge wall taken. We didn't fancy a night outside so we committed the heinous crime of lingering on the water point overnight. Sorry etiquette police - needs must and we were off again at 8.00am the next morning so no harm done.
We held another fishing competition in which age again triumphed over youth in the form of three nice roach. Jeff was most distressed by this turn of events and kept creeping into my swim, much to the amusement of the crew of nb Tiger Princess as they loked on. Fishermen are not supposed to pursue their sport in a state of raucous high spirits.
Posted by Andy Tidy at 7:00 am