Greensforge to Stourport
Staffs and Worcester Canal
Sunday 19th July 2009
13 Miles
12 Locks
6 Hours
Greensforge is a lovely mooring, but if you are a visitor you should expect to stop below the lock. Above the lock there are a couple of spaces for the water point, but then nothing else except loads of long term moorings.
We made another lazy 10.00 am start, and soon came across nb Lilbeth of Tamworth at Rocky Lock. The crew had come up the River Severn a couple of days earlier than planned due to rain in Wales a fears of rising water levels - a rumour which escalated as we progressed towards Stourport.
Just belong Gothersley Lock we spied the reconstructed foundations of a traditional Staffs and Worcester Roundhouse, which used to be a pair to the one at the top of the Gailey flight. It's a shame it's gone.
Shortly after passing the crags of Devils Den we made a brief stop at the aqueduct over the upper reaches of the River Stour which was flowing strongly beneath its two low arches, just time for a quick photo for the collection. Beyond Stewpony Lock comes the diminutive Dunsley Tunnel - all 25 yards of it, complete with a full BW warning sign at each end: extinguish all cigarettes, naked flames etc. Its a bit of overkill for a tunnel which, as Jeff pointed out, was so short that the bows of a full length boat would just about be emerging before the stern went in! Hey Ho - rules is rules. 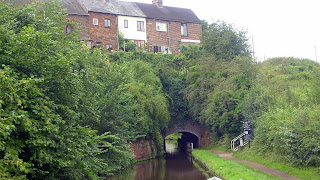 I forgot to photograph Dunsley, so here is an image of Cookley for good measure!

Next up it was Hyde Lock with is lovely cottage. I was particularly taken with the front gates which were fashioned as minature mitre lock gates - very cute and worth imitating at home maybe 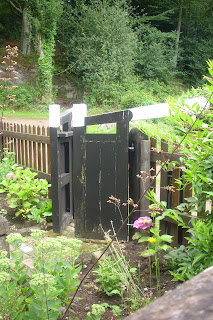 Thinking of lock side houses, I saw a couple of interesting ones for sale, one lovely and probably very expensive example at Whittington Lock, and another much smaller one at Debdale Lock which is currently being restored - Mr Denny take note. 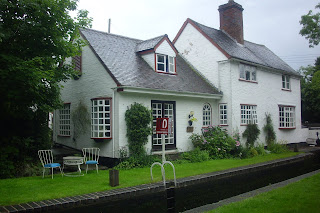 There is a huge cave alongside Debdale Lock. It must have have some specific purpose at one time, but with no windows I think it is too dark for a cave house. 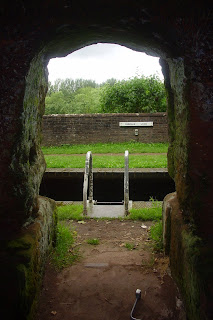 The stretch through Wolverley is very beautiful, with the canal sometimes notched into the overhanging red sandstone cliffs, perched precariously above the River Stour which laps at its foundations. Wolverley Court offered another aqueduct for the collection, but with all the rain we have been having it was more of a submarine tunnel verging on a culvert. As we entered Kidderminster the heavens opened yet again and I was physically pummelled by the rain, so strong that it forced its way through my umbrella in the form of a fine mist. The shower was so localised I could see the wall of water up ahead, had time to slow the boat, don my waterproofs and set up the brolly before motoring into the maelstrom - it was like stepping into a very cold shower! We made it to Sainsbury's at 3.45pm - 15 mins before closing time, which was just long enough for Belle and Jeff to perform a re-enactment of "supermarket sweep" before they closed the doors to the public.
My enthusiasm for boating was draining away as fast as the rainwater was dribbling from the scuppers, and my resolve to reach Stourport melted away. However, the rain eased at 4.15pm and within minutes the Captian was spied charging off into the undergrowth to try and photograph the Kidderminster Aqueduct! Will he never tire of this most perverse of obsessions?
Kidderminster carries few legacies of its proud industrial past. The factories which lined the canal have all gone and been replaced by the bland faces of the usual redevelopment suspects; Tescos, Sainsbury's, McDonalds, Pizza Hut, M&S etc. Franchised businesses may pay my salary, but they do little to maintain the individual heritage of a town. That said, One mill building remains, cunningly incorporated into a Debenhams outlet, with the old pumping house converted into a Frankie and Benny's. Conversion is far better that total destruction. 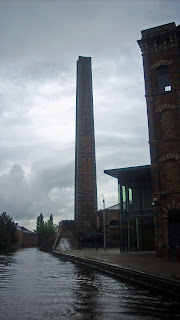 We are never too keen on town centre moorings so rather than press on into Stourport Basin, we moored between Oldington and Bullocks Lane Bridges which offered a quiet spot for the night.
With two days travel under our belts I took a look at the repacked stern tube, which had delivered only the merest dribble of water into the bilge. The shaft may be a bit worn but the repacking remedy seems to be doing the trick. As to the River Severn, the rumours are not good. The boats coming up the canal report a river in flood, well up into the red zone.
Bother, this will be the third aborted attempt to cruise the Stourport Ring which has repeatedly been thwarted by inclement water levels. As a plan B, I guess we can always retrace our steps and reach Kingswood Junction via the Stourport Canal and the BCN. Not an ideal alternative, but at least the schools haven't broken up yet.
Posted by Andy Tidy at 7:00 am

I think your photo is actually of Cookley Tunnel rather than Dunsley, isn't it? I don't think Dunsley has houses over the top.

Adam - You are absolutely right. Words and photos do not agree. I am talking about Dunsley and displaying Cookley - well spotted!