Tame Valley Canal
This waterway was among the last to be built, opening for trade in 1844 as something of an aquatic bypass to relieve the congestion along the BCN Mainline, specifically the Farmers Bridge flight which couldn't cope with demand, even with 24 hour working.
Whilst I have navigated much of its diminutive 7 miles, I have never actually made a passage up the 13 locks of the Perry Barr flight. Cycled yes, walked yes, but never on a boat - the final five miles from Salford Junction to Rushall Junction represent the last five of the BCN to be explored. A objective for next years spring trip with Mr Truth. 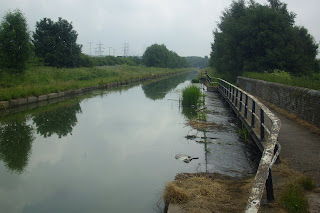 Tame Valley Canal east from River Rea Aqueduct
However, I have spent some time around this canal over recent weeks as it offers rich pickings for aqueduct hunting. It's dramatic cutting end embankment construction causes it utilise no less than seven aqueducts, that's one per mile, and I am not sure that any length of the Shroppie can beat that!
The aqueducts on order of appearance from the south, are:
Photo's of each can be found via the links to my ukaqueducts blogsite, but I havn't managed to access a location to photograph where it crosses the railway. Railways are always tricky - does anyone out there have a photo I can use? 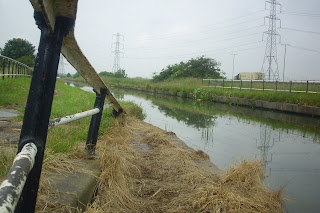 Exploring the aqueducts was quite an experience. My Pearson's Guide was some help but had to be cross referenced to the Birmingham A-Z which took me through some areas of the Black Country I had never visited in all the 20 years I have lived here. I kept wondering where the canal was and then, time and time again I would see a huge great embankment looming up above, looking for all the world like a railway embankment on steroids.
From below the only thing that set the aqueducts apart form their railway counterparts were the over thick spans built to accommodate four feet of water rather than 2ft of ballast. That and the steady drip drip drip from the many weeping leaks which exist.

Below, at ground level, cars dashed about in a profusion of noise and speed, making photography a dangerous sport. But up above, up about 70 steps, there was the peace and tranquility of a pensioned off canal, populated only by a few fishermen and even fewer boaters.
It's not my favourite canal, but it is the closest to my home and it certainly isn't without merit.
Posted by Andy Tidy at 7:00 am