With a deadline to meet and a disturbed night we were awake at 6.30am, entering the first chamber of the Tardebigge flight at 6.50am. Our sudden departure surprised the crew of a hire boat, who were also showing signs life and an aspiration to take advantage of the locks, which had been set in our favour by a descending boat the night before. 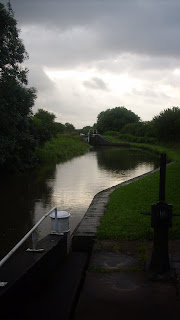 Tardebigge bottom lock at first light
The first half dozen locks were negotiated by the Captain and Belle, with a bleary eyed Jeff emerging at 7.30am. We settled down to a steady pattern, Belle wheeling ahead, Jeff steering and the Captain working the locks, soon finding ourselves at lock 43. This would be the Duke of York's favourite lock, being half way up the hill! It was at this point we met an oncoming boat who also made a 7.00am start from the top. The canal builders must have realised how easy it is to lose track of where you are, so they very kindly carved the lock numbers into sandstone blocks, which they set into the lock tail walls. 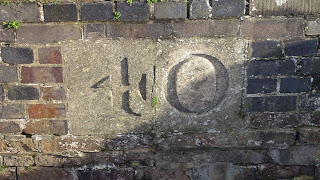 Lock number detailing on the Tardebigge flight
At lock 49, beneath the towering earth ramparts of Tardebigge Reservoir, we spied the battered bows of Tysley being bow hauled out by a disconsolate looking cast of the Mikron Theatre Company. Tysley's engine had failed 10 minutes before and this unwelcome development threatened their timetable of shows, which were due to start in two days time in Tewkesbury. 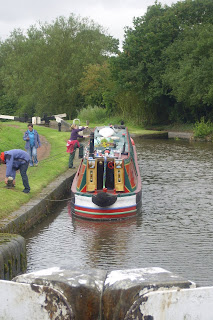 NB Tysley - Mikron Theatre Company (minus a working engine)
The Tardebigge flight may be the longest in the UK, but apart from lovely views of the Malvern Hills, its meandering course provides little opportunity for a vista of endless locks marching up the incline, as seen at Hatton or Caan Hill. Instead, one has to focus on the micro, which is interesting in its own way. 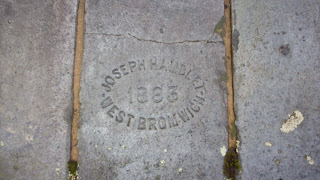 Did you know that all the blue bull nosed engineering bricks used to top off the lock walls were formed and fired in a variety of works in Tipton. Well neither did I, but a close inspection revealed an occasional imprint of their origin, a feature also used by BW in their more recent renovations. 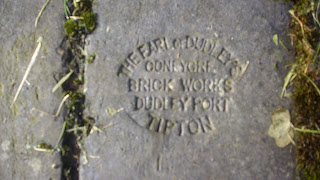 Between locks 54 and 55 you can see a pair of rotting hulks in the shallows, a rare sight in today's sanitised canal network.

We completed our ascent in a very creditable two hours fifty minutes, a time which this crew are unlikely to better. Everything was set in our favour. 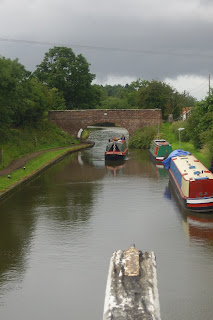 Entering Tardebigge top lock
One note of caution: Boaters beware. Don't get too excited by the prospect of a refreshing pint at Tylers Lock Pub, which stands like a beacon at the top of this long hill. The pub is a mirage, long since closed down and offering little hope of succour to weary boaters.

Tardebigge Tunnel is, for 2/3rds of its 580 yards, hewn out of solid sandstone with just its northern third being brick lined. I like rough rock tunnels - but dont get me started about the glories of the Standedge Tunnel again.

On retiring to bed last night we discovered the terrible truth that the toilet holding tank was full. Not nearly full "be careful not to flush" sort of full, but full full, right to the top - cup runneth over sort of full. We therefore approached the Anglo Welsh pump out station with legs crossed, having already drawn lots to first access to the said facility. Jeff was all for using the loo whilst the pump was running, but was dissuaded on the ground that the resulting vacuum could suck him down the toilet a la Monty Python's Flying Circus!

The tunnels get longer as you progress along the Worcester Birmingham Canal, with the 613 yard Shortwood Tunnel being preceded by a canyon of overhanging trees which enhance its length and make for a spectacular approach.

The stretch through Alvechurch offered lots of scope for aqueduct hunting, first a brick lined arch containing a footpath just south of the town and then Aqueduct Lane Aqueduct to the north.

Finally, it was on to Hopwood and an impromptu meeting with representatives of the Goon Squad, who tottered uncomfortably down the towpath in delightfully inappropriate dress. With the meeting over we shook the dust of Hopwood from out sandals and moved the boat as far from the drone of the M42 as we could, without actually entering the southern portal of the Wast Hill Tunnel. We managed to find a mooring under an oak tree which was just within the cutting and therefore away from the noise, but due the the limited depth the stern had to lie a couple of feet from the bank. A night on the mud felt quite like old times.

The Goon Squad bore bad tidings which scupper next weeks plans for a return via Braunston. Instead we will make for Birmingham tomorrow, drop Belle off and Jeff and the Captian will take two days to return Wand'ring Bark to Calf Heath via the Black Country Museum and Wolverhampton.
Posted by Andy Tidy at 7:00 am