Birmingham Canal Navigations
December 2009
The Bentley Canal is one of the Black Country's more obscure lost canals. Obscure not because it was short - it was nearly four miles long, nor obscure because it traversed remote area - It ran from the crowded outskirts of Wolverhampton, through Wednesfield and on to the edge of Walsall. It is obscure because so little remains to be seen on the ground today. 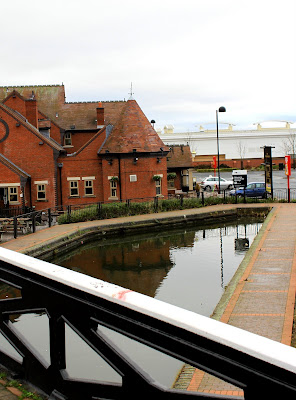 The only navigable bit of the Bentley Canal
The 3.5 mile Bentley Canal was something of a latecomer to the waterways scene, being built in 1843 with ten locks falling from the west to the east. The canal formed a busy communication link to mines and foundries in the area, before becoming delelict in the 1960's and bulldozed in the early 1990's.

Ardent canal hunters weep at the extent of the loss at the Wolverhampton end. Only seventeen years ago a walk along the line from Wednesfield Junction would have taken you past six overgrown lock chambers set against a spectacular backdrop of crumbling industrial architecture. Just a few years later all this had been bulldozed away, smoothed under a layer of new concrete. 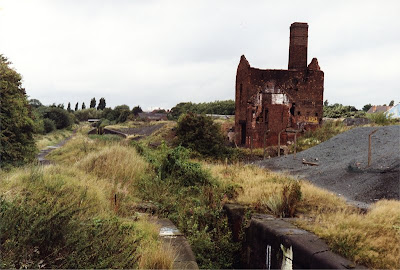 Bentley Canal as it should be remembered - 1992 style (Photo:TNC website)

Whilst the excess of concrete may have been avoided further down the canal, there are very few structures left but it is still true to say that the Bentley Canal has left it's mark on the area. The line of the canal cuts a swaithe across the landscape, a track which is particularly marked when viewed from the perspective of Google Earth. This ariel perspective reveals an intermittent broad strip of open land  from Wednesfield Junction down to Spring Bank Bridge, across the border into Walsall. The eastern half is less distinct and 'inproved', but given a bit of prior research the course can still be traced, and much of it followed closely. The current recession does bring the bonus of a great many redundant industrial sites, which provide access to areas normally denied us.
I undertook this trip in the company of Jeff on our bicycles, which is undoubtedly the easiest way to explore the canal. However, we made the journey during a very wet spell in early winter 2009, which made for heavy going over the open grassland in the east. 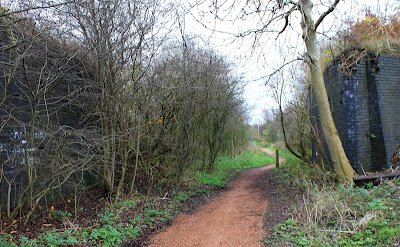 Having read Eric Richardson's somewhat melancholic account of his trips in the late 1980's and early 1990's when most of the more interesting structures were lost, I set off with very low expectation of finding any solid evidence of the canal at all. In the event there were tell tale traces all along the route, but it would be unfair to suggest that this is a trip down one of thise lonely reed filled channels with only the wildlife for company. What is amazing is that it is still possible to trace the route of the channel with great accuracy, even over the intensively redeveloped western end.
Given the lack of visual reference points I have not  included "then and now" photos as I often do. Instead, I have drawn from a range of sources to try and capture what area looked like in the recent past, crediting the photographers where known.
Having completed the trip, Jeff questioned if I was disappointed at the lack of remains on the ground. Providing you don't expect a towpath walk, there is much to be said for an exploration of the area. The detail may have been obliterated, but the broad canvas remains and, with a bit of research and some imagination, the agra can be brought back to life.
My blog posts for the Bentley Canal will cover the following bite sized sections:
As ever, I have tried to get my facts right but I have relied heavily on material freely available on the internet and from Eric Richardsons 'In search of the lost canals of the Black Country'. Please feel free to correct any mistakes you spot, or indeed to acknowledge an interest in this obscure strip of Back Country history.
Posted by Andy Tidy at 6:00 am

Andy, this is fascinating. You invite corrections: you mention nine locks along the canal; a map I'm looking at shows 10 locks. Six in the "first flight" between Wednesfield Junction and the Neachells Branch; then four in the "second flight" between there and the Anson Branch.

Halfie
Its interesting you should say that. I originally had it written as 10 based on the written accounts but then I referred to Eric Richardsons map and saw only three in the Sandbeds flight, one between Clarkes Lane and Charles Street and two between Charles St and Spring Bank Bridge. From your accurate map should that be two and two or three and one?
I thought someone might clear that up for me!
Any chance of sending me a scanned copy of that bit of your map?
Andy

I'll gladly send it to you. I can't find your e-mail address - do I have it?

Halfie - I have left it as a comment on your blog.

James
I really enjoyed my trips to Wednesfield to have a look at the Bentley Canal. Its a fascinating area with so much history if one scratches beneath the surface - quite literally in places!
Andy

Hi there
I have just read your articles having found them via the WV11 facebook page. They are so interesting and a pleasure to read. It is so sad that much of our industrial history is apparently lost. So, for me, it is great that due to the efforts of people like you (and the internet) this history is being rediscovered. Thank you. Penny.

Penny
Thank you for your kind words.
When I was younger I always though that local history was dull but as I have got older I have found a lot of satisfaction in finding out about the everyday things which went on in our area.
In 2009 have deliberately allowed myself to follow my cusiosity and I have ended if in all sorts of interesting (and sometines dodgey) places. Its the best new years resolution I ever made!
Andy

Picked this up via the YamYam, and linked it. It's fascinating- thanks.

Hi Andy great to see pictures of what I remember as a kid out on my bike. I have an early picture of Wednesfield Stop, would you like me to email it. Thanks Karl.

Karl
That would be great. I will add it to the post.
I dont put my emial address on the blog on account of the spam it attracts, but if you tick the e-mail box on a comment it will send your e mail address to my e mail account, and I can respond with mine. Does that make sense?
Andy

Your posts inspired me to do my own investigations of the Bentley Canal and I wondered if you'd ever encountered Hills Bridge, which is intact and preserved within the grounds of the Tata Steel site in Wednesfield? I took a couple of pictures of it if you might find them useful.

Hi Paul
I did have a look at the bridge on a subsequent visit, I even took a photo (for a Waterways World Atricle I think) but I never added to the record and now I cant find it! Can you send me a copy to andrew.tidy@sky.com please?