Chris from nb Nebulae knows of my passion for obscure waterways books and takes an active role in feeding my appetite, coming up with some real gems from his extensive library. 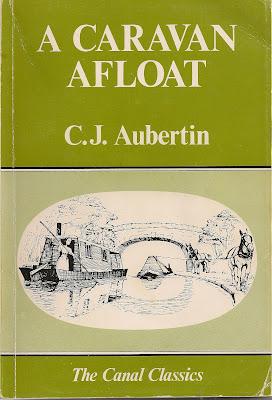 Every now and then I arrive at Wand'ring Bark and see a carefully sealed package in the bows, and I know I am in for a literary treat. This week was no exception as I unpacked a copy of A Caravan Afloat by C J Aubertin, a 1982 Shepperton Swan reprint of a 1916 account of pleasure boating at the outset of the first world war.

I have read many trip report type accounts of watery travels, but never one from dawn of the 20th century. It's an account which predates Rolt by a good 40 years, and records life on the canals a mere 50 years after the railways burst on the scene and the declining waterborne traffic was still propelled by natural horsepower. All in all a very unusual insight.

The author owned a 2.5 ton punt like craft which, in the absence of a better title, was described as a floating caravan. Of course, like most other boats of the time, it was unpowered and trips involved the hire of a man and a horse. This presented a problem at the outset of the war when he needed to get the craft from Marple to Reading so, with typical British pragmatism, he and some friends took in on themselves to bow haul  the boat themselves.

So we are treated to a very eloquent account of canal life during a period of huge change. We follow the boxy boat along the Macclesfield, Trent & Mersey and Oxford and so out onto the Thames. They record the rural idyll in Cheshire and Oxfordshire contrasted against the industrial chaos of the Potteries accessed via a subsiding Harecastle Tunnel where they had to wade along a submerged towpath, the orange water reaching up to their knees.

Perhaps the greatest surprise of cruising in these days is the challenge of finding provisions. With no fridges getting fresh supplies was regular requirement and we find a landscape of occasional villages with shop opening hours highly restricted and a crew resorting to begging and borrowing what they can to put food on the table.

This was also an era of pre nationalisation with the canals in private or railway hands, forcing them to pay tolls as they progress and canals facing an uncertain future. With the core journey out of the way Aubertin devotes chapters to the boats, their crews, the impact of the railways and of course an inevitable look to the future.

I think that in his heart Aubertin realised that the life on the canals had changed forever and the shift of goods to the railways was both remorseless and permanent, but he does look to the continental model of waterway improvement but this is more in hope then expectation.

So here we have a very unusual book, providing a pleasure cruisers perspective when a boat of this type is a real novelty acquiring its nickname "The Ark" from the declining body of "real" boatmen.
Posted by Andy Tidy at 6:00 am

Good morning Captain,
Sorry for being a grumpy old man, but, could you please alter the first 5½ paragraphs so that they are not Grey text on a White highlight, please?
Or are you on commission with Specsavers?? LOL (Other opticians are available apparently)

If you want your own copy there is one here
http://www.abebooks.co.uk/Caravan-Afloat-Canal-Boats-Aubertin-Simpkin/1426155624/bd

hi, is the same C.J. Aubertin that lived in Wargrave and ran the Noah's Ark Encampment at Cherry Eyot on the banks of the Loddon.