This is the first of two picture books drawn from the archives of several major collections of canal images. The author trawled through a staggering 60,000 images over a two year period in the late 1970's and included 141 in this edition, each with its own detailed description of where and when it was taken, plus a well crafted context to give a wider view. 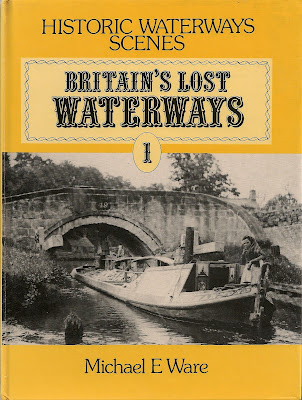 Ware gives credit to Ronald Russell's The Lost Canals of England and Wales as his inspiration, and I can see how this volume represents a pictorial counterpoint to Russell's text heavy on the ground description of these abandoned waterways. This cross reference of authors is interesting as I only read Russell's book a couple of months ago.

Given the volume of material reviewed its amazing that he managed to limit himself to just two books, this one featuring the inland navigations and promising the publication of a second on the routes linking into the sea. I can feel an Amazon search coming on. The world of waterways books is a fairly small one and it is striking that many of the finest photos of the inland waterways  were taken by Henry Rodolph de Salis on his epic 11 year exploration of the system covering over 14,000 miles in the late 1800's, often aboard his 59ft steam launch Dragon Fly. Surely there is a biography of this man and his travels to supplement his exhaustive gazetteer of the canals as they existed at the time.

It is really difficult to pick individual images out of this book, which by and large follows individual waterways illustrated by groups of photos.

Given my love of the BCN I will offer a couple of sample images from the area: 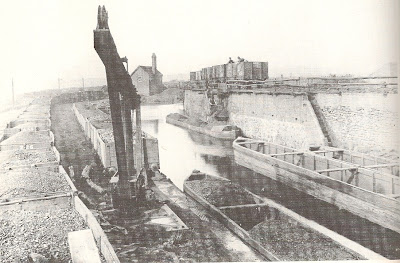 Here is an unusual image of the terminus basin of the privately owned Pensnett Canal, built in 1840 with this image taken in 1927 before its closure in the early 1940's. The line of the canal can still be traced from the western end of the Dudley Tunnel, but the basin is now buried beneath a trading estate. 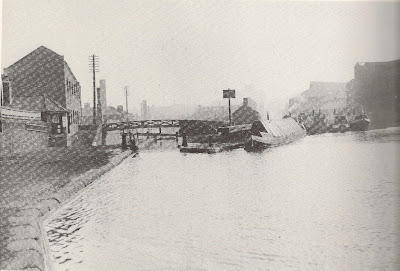 Here is another BCN scene, but this time one which should be familiar to all boating enthusiasts. Its the top lock on the Farmers Bridge flight, but being taken in 1946 it includes the Newhall Canal off to the right. This canal was closed in 1948 and only its stub remains in the shape of Cambrian Wharf. The rest was buried beneath a series of high rise tower blocks in the 1960's and the foundations of Baskerville House. Sections of the old basin and its lock were unearthed during the construction of the new Birmingham Library.

I could go on and on. The book is full of atmospheric gems like this, but if I have whetted your appetite maybe you should seek out a copy for yourself. Something to set to one side and peruse in the long nights this winter, maybe a Christmas present to yourself....
Posted by Andy Tidy at 6:00 am

Firstly, try eBay they have a selection Michael Ware's books, including "Commercial Waterways", which may just be a rehash of his earlier works.

Secondly, will you please stop reviewing all these great books - I'm trying to reduce the laod on my bookshelves but everytime I read a review I go off & buy a copy!!

Graham
I have just got my copy of No2! Am currently out and about on WB and have amassed a scary collection of great waterway gems from the second hand bookshops on my route. Helen keeps encouraging me to buy! Expect further reviews on my return.