This is the third of Aaronovitch's "Rivers" books following the spooky education of Peter Grant, a PC specialising in the "strange stuff" which is hitting the Met left right and centre these days. 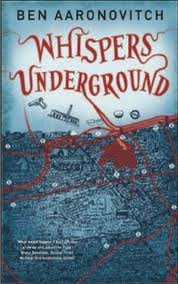 I have to say that to my mind it is the weakest of the three, which probably accounts for the fact that it took me several weeks to complete, with several other books being read in the meantime - always a good indicator of the compellingness of a book.

Grant is called in to investigate a suspicious death on an underground platform and a dash beneath the streets of London ensues. But its not as gripping a tale as we have been treated to in the last two books. The old characters are present, Nightingale his teacher and mentor plus some of the intriguing "river" girls, but they have been pulled back to the margins and the resulting line up us the less for it.

Then there is the style of writing which has evolved, lots more slang, swearing and pop culture references which will make the book date like crazy. I don't see this change in style as a positive step, sloppy more like and all those references to Terry Pratchett and Dr Who dropping me right out of the fantasy the book tries to weave.

So my conclusion is a rather modest "ok", not a bad tale but not great either. Maybe this once innovative concept has run its course and is incapable of maintaining sustained interest. This is not shaping up as another Discworld.

I believe it's the last in the series. Although I liked the slightly snide pop culture references, I agree that it's very much the weakest of the three, which is a shame as it has some fantastic ideas and settings.