You may remember my recent review of Thames Waters, Roger Pilkington's first book about his travels on board Commodore, an ex wartime Commodores barge. 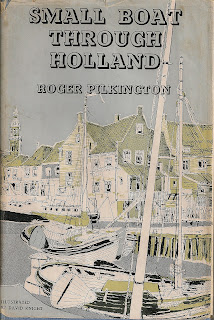 Roger wrote a whole series of "Small Boat" books covering the travels of Commodore and her successor as he explored the waterways of Europe. Ideally I would have liked to have read Small Boat through Belgium which is the next in the series, but such is its rarity that I cant find a copy for less than about £18, so I have skipped forward a couple of years to the late 1950's when Commodore spent a few seasons on the Dutch waterways. Belgium was explored with trips to and fro across the Channel  but her arrival in Holland called for a different strategy and she was routinely hauled up out of the water and put in a shed for the winter.

The thing I like about this series is the interest the author takes in his surroundings, looking at the history of the area and observing the customs of the local inhabitants. All this is recounted with a considerable degree of humour with the journey providing the thread which holds it all together.

The Dutch canals around the Ijsselmeer have always interested me. I routinely fly in and out of Schiphol Airport and always peer down at the canals which fringe these huge polders, wondering which are navigable. According to Pilkington there are hundreds of navigable waterways, with narrow channels leading up to most hamlets. Whilst the land is very flat, like the Fens, there is much of interest, particularly the old ports which now find themselves many miles inland and surrounded by seas of fields.

We are given a potted history of Holland and its bloody oppression under the Spanish Inquisition, its inhabitants subjected to all kinds of horrors. But against this bloody backdrop the indomitable spirit of the Dutch comes to the fore, refusing to accept a subservient rule and standing out for freedom and justice. They paid a heavy price and repeatedly resorting to the flooding of their hard won polders to drown advancing armies like a latter day crossing of the Nile.

Then there is the geography of the place. A land wrested from the sea and disaster never more than a storm away. At the time if the book the Ijsselmeer was a relatively new feature, a huge freshwater lake created out of the Zyder Zee by the construction of a huge dyke and large tracts drained and turned to agriculture increasing the size of the country by nearly 11%. This drainage programme was so dynamic that Commodore was run hard aground in new dyke not shown on the map during a night time journey to visit an island which was about to lose its island status.

It all adds up to a delightful image of a cruising area waiting to be explored.  We leave Commodore heading to the Baltic and another of her watery adventures, not bad for a 46ft cutter with one small engine capable of no more than 7 knots.

The book may have been printed 55 years ago but it retains a timeless charm and is completely compelling even today.

Does anyone out there have a copy of Small Boat through Belgium I can borrow?