Other Posts in this series:
1. Calf Heath to Gothersley - this post
2. Gothersley to Stourport
3. Stourport to Upton on Severn
4. Upton to Gloucester
5. Gloucester to Frampton
6. Stroudwater Canal to the Severn
7. Frampton to Gloucester
8. Gloucester to Strensham
9. Strensham to Evesham
9. Evesham to Stratford
10. Stratford again
11. Stratford to Yarningale Common
12. Yarningale Common to Hatton
13. Hatton to Bascote
14. Bascote to Marston Doles
15. Marston Doles to Cropredy

At last, the start of my account of our 2012 summer trip! The last few weeks have been frenetic squeezing out all spare time, but now I have started on this series I will ensure I finish! 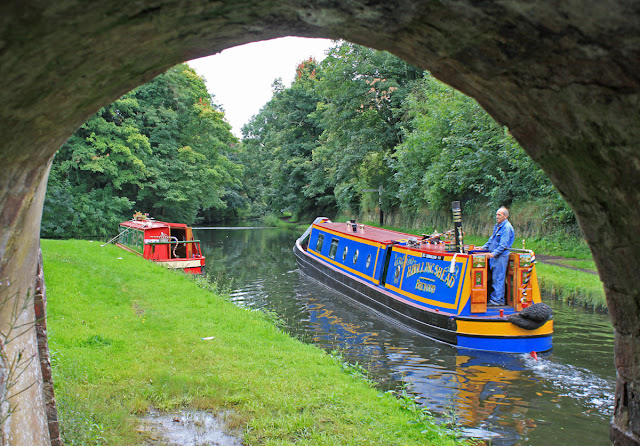 This trip was an ever changing feast. 1st it was to be a run around the Thames Ring, ending in Oxford, but the prospect of the Olympics and a severe drought put paid to that. Then it became a run down the Trent and over the Leeds Liverpool to Wigan, but a surfeit of water put dashed that plan from my dripping fingers.

Finally, an unexpected twist happened when Jeff made an unexpected departure from the family nest - and then there were two. We were free to go where we wanted and so, after a bit of thought, we went in search of of the huge plum crops which were said to exist on the Gloucester Sharpness (or should that be Berkley) Canal and up the River Avon.

We decamped to Calf Heath on Friday night, Belle, myself and about half a ton of jam making kit which we stored away on every conceivable nook and cranny. 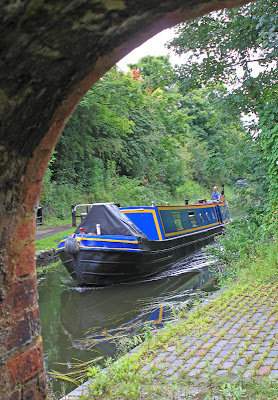 We awoke with the dawn, probably about 6.30am and set off at 8.30 under a grey and spitting sky with strict instructions to look for jamming fruit. No sooner had we started than we were finding foraging material - loads of blackberries near the M54, but the wild raspberries at Pendeford were finished, just a handful of squashy ones which were no use to man nor beast.

The canal was quiet, with nothing moving at The Bratch. The lock keeper said that a few boats had passed in the morning but ours, at 3.30pm was the first of the afternoon. Where is everyone? As we proceeded south the Damsons came into evidence, but they were hard and unripe. Maybe we will have more luck further south.

We paused at Swindon and purchased some excellent fish and chips from the award winning chippie before pressing on through Greensforge Lock under the gaze of dozens of gongoozlers at The Navigation. More blackberries were picked from the offside but it means getting stuck on the mud - I am getting rather expert in pulling clear with just the engine!  The weather improved as the day wore on and we were  finally treated to a perfect summer evening, eased along with a Sloe Gin and a take out pint from Wightwick Lock later on.

We ended the day somewhere between Devils Den and Stourton Junction, a bit further than we planned but some kind of bash was on at Ashwood Marina involving a loud band which destroyed the peace for half a mile or so.
Posted by Andy Tidy at 11:10 pm

I understand that sloe gin is a tasty tipple (still looking forward to the experience!) - but a pint from a lock? You really DO have canal water running through your veins!

It was draught bitter dont you know.... That bottle of sloe gin still has your name on it.