The Worst Journey in the Midlands - book review

Sam Llewellyn, writer and part time explorer stands on Plynlimon and considers the feasibility of an autumnal rowing trip to London. 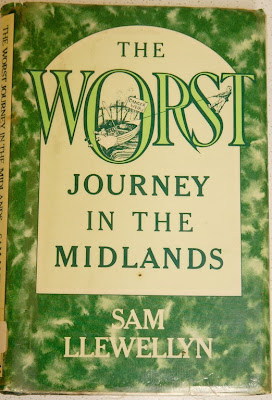 He would have been about 34 at the time and his previous boating experience was an abortive  camping trip down the River Bure in 1961, the year of my birth.

The book starts with a canoe trip from Llanidloes to Welshpool but the tale really commences when he teams up with Magdalen, an 83 year old rowing skiff with an advance case of rot in her mahogany planking. This fragile craft was to be his constant companion for the next three week, buoyed up by enthusiasm and several large tubes of plastic padding,. The plan was to run down the River Severn to Tewkesbury and then up the Avon to the Grand Union and so to the Thames via the Oxford Canal.

But there was a snag. The Avon was closed and of course, no link exists between Higher Avon and the GU at Warwick. A plan B was adopted which utilised the Worcester Birmingham Canal and the North Stratford Canal to get him back on track.

Unfortunately for the author, his trip coincided with the eruption of a volcano which triggered the wettest autumn on record. In the face of this adversity he pressed on, a solitary figure rowing his way across the Midlands. His contact with the wider world lessens as his journey progresses, lost in a world limited by the veils of rain which surrounded him and lost in a watery misery of self contemplation.

He comes across as a warm and welcoming chap, someone you would like to meet. He certainly won the hearts of those he encountered, offering food, drink, tows and the occasional bed.

All this was the better part of 30 years ago which makes him 64 and I have to wonder if her ever returned to Norfolk and completed his trip down the Bure, I certainly hope so. All in all this is an absorbing read for boaters with a pioneering streak in them. A bit Boys Own meets Swallows and Amazons, but my guess is that this was staple fare for Sam in his adolescence. Arthur Ransome has a lot to answer for!
Posted by Andy Tidy at 9:41 pm

A misunderstanding Frank. He tackled the Bure in 1961 as a teenager but was in his thirties when he did the row in the early 1980's. Sorry for the confusion

Don't know if this is allowed or not, but the Worst Journey has leaped into the electronic age as an ebook, available on Amazon. Though it may leak so much rain that it will fuse the lot.