What do I say! Sometimes some of these oddball films come up trumps and sometimes they don't - this one didn't! 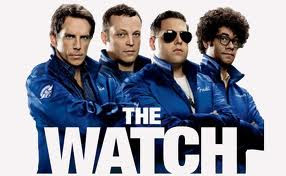 Maybe I should have appreciated that comedy and sci fi are uneasy bedfellows but an evening with Jeff presented itself and this seemed the best of the bunch.

Lets be clear, this isnt a story about a timepiece. Its a tale of four socially dysfunctional guys from Smallsville USA who, in response to a murder, set up a neighbourhood watch scheme. After much ridicule from the public and the local police they find themselves caught up in the midst of an alien invasion - and its up to them to save the planet.

There is much madcap chasing around but the outcome was never really in doubt. Hey, how often do the baddies / aliens win in this sort of situation? There are some funny moments and some unexpected twists, but overall the film struggles to lift itself above the mundane.

If you think I am being a bit hard on it, it is probably telling that this new release attracted an audience of less than 25. Mind you, Jeff loved it, especially the innuendo and shoot outs, so I guess that the target market is not the 50 something bank manager brigade....
Posted by Andy Tidy at 7:17 pm