Canals Are My Home - book review

You may remember my enthusiastic review of Iris Bryce's third and final "canals are my" book Canals are my World. 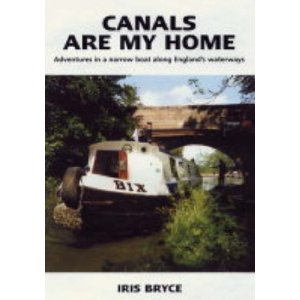 We recently took Wild Side Preserves on the road to the Blisworth Canalside Festival and as is my custom, I took a stroll among the exhibits. These wanderings inevitably throw up something life enriching, be it a book, an object or a person. At this festival is was two combined - a copy of Canals are my Home, the first in the series, and a meeting with the author herself, and her lovely husband Owen.


There was no missing Owen. He was standing on the towpath quite literally blowing his own trumpet to a favourite jazz track. That set my little grey cells going. I remembered a story about a jazz trumpeter roaming the canals in the 1970's so I stopped, turned and spied a small table covered in jazz music and a couple of Iris Bryce's books. There is no point being a shrinking violet at times like these, so I asked "are you, by any  chance, Owen Bryce - husband of Iris?" Indeed he was and I was soon chatting to Iris and she was telling me all about her days afloat  and her remarkable journey to the Medway. Her accounts of the canals correspond with my childhood memories, collapsing towpaths, silted channels and rotting gates.


Which takes me to her first book - Canals are my Home. This is the account of their first two years aboard Bix, a 65 foot narrowboat built by Fernie Steel and fitted out by Blisworth Tunnel Narrowboats, a yard she can now see from her kitchen window.


The book chronicles their transformation from Kentish farmers and parents of grown up children to a footloose couple who's home is a long thin metal box which carried them the length and breadth of England. The peculiar thing about this series is that you can hear Iris as you read, you don't even need to have met her! The story unfolds as if it is emerging from a variable speed tape recorder in that the book lingers over treasured memories lasting just a day or two and then catapults you forward three or six month at the turn of a page. This is all part of the book's charm as far as I am concerned.

Unlike most of today's continuous cruisers, they had no pension to sustain them - just a modest repayment of an old business loan which stopped abruptly when the business failed. Rather than being forced off the water they embarked on a series of short term casual jobs, lecturing on canals and jazz plus taking a few paying guests and by writing waterways related articled they managed to get by.

Its easy to imagine them plodding round the country out of season, Owen playing the trumpet and Iris on the piano which was physically built into the boat as the hull was being fabricated. No wonder Bix became such a recognised craft in her day.

Now, 30 years later, Owen and Iris live beside the Grand Union in Blisworth with Bix remembered in a scale model which was proudly on display alongside the books of their travels.

Its not so much the story which is compelling, but rather the period backdrop she describes. The canals were seemingly in terminal decline and the relative good order of today was unimaginable. If you cant meet Iris and Owen read the book. Better still, visit Blisworth Canalside festival next summer and listen out for a trumpet. Mind you, don't expect to find a copy of the second book in the series - I bought the last one! More of that another time.