127 Hours
Film review
January 2011
Jeff and I seem to be into something of a run of films where the bulk of the action takes place in one location. First there was the lift in Devil, then the coffin in Buried and now its a bloke trapped in a canyon by a boulder. 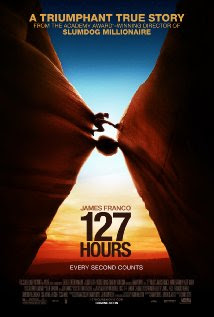 127 Hours
I have been told that there are only about a dozen basic stories in the whole world, and each book / film reworks one of then in a new context. If so, what theme does 127 Hours follow? Answer: the common man faces a natural adversity and triumphs.
The plot line is simplicity itself really. A devil may care twenty something with a passion  for canyoning in Utah is introduced tearing across the desert on his mountain bike and then leaping down ravines with reckless abandon. All this comes to a shuddering halt when he slips down a big fissure and dislodges a boulder with proceeds to fall and trap his arm.
From the outset you know that this is a true story "about a bloke who cuts his own arm off", so how can they possibly make an absorbing film where the only character spends 90% of the time on his own with just a boulder for company?
I admit that I was sceptical but I shouldn't have been. You see, this film was directed by Danny Boyle who excels in turning unusual topics into compelling viewing. Think Trainspotting, Shallow Grave, 28 Days Later and Slumdog Millionaire, to name but a few. The bloke is a cinematic genius who's ability to tell a tale pulls which draws an audience rather than overpaid Hollywood stars.
The four days spent attached to the boulder are a clever mix of third party footage, "self shot" video and delirium induced flashbacks which fleshes out the character. In the end, with food and water gone, he resorts to the drastic option of a self amputation, all in glorious technicolour. One moment he is in a semi conscious dream scene with Dido singing at her ethereal best and the next it's jarring acid rock as he plunges a blunt knife into his own arm ending with crescendo achieved as he cuts through his main nerves. I don't know if it's all anatomically correct, but its certainly gripping stuff. Even worse was when he had to break each bone in his arm, an action which had the audience groaning and clutching at their own appendages!
In true "real life" style, the hero escapes and survives to tell the tale, but only by the skin of his teeth. What's more, he emerges a better man and the film concludes with a single message to the audience :
If you go into the wilderness alone, at least leave a note saying where you are going.


Its a surprise winner in the Ahab chart - well worth a look if you are not too squeamish.
Posted by Andy Tidy at 6:00 am

I too thought this film was amazing, I was gripped throughout, and echo everything you have said. Danny Boyle is a legend, and I for one would go see any film he was connected with regardless of what it was about!!

Debbie
You are absolutely right about Danny Boyle. If he makes it, it is worth a look.
Andy