British Canals
by Charles Hadfield
There are some books, like the Bible, that you know that you really should make an effort to read, and British Canals is one of them. 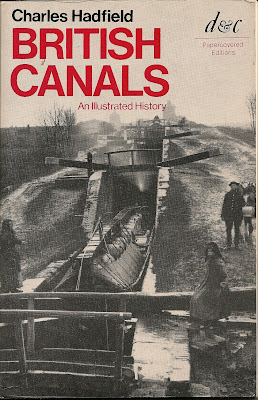 This is the master volume of a series published by David and Charles and within its 300 pages it covers the canals right from their inception, through their climb to prosperity and back down through their decline to the creation of the British Waterways Board in 1962.
The book was first published back in 1950 but the copy I bought from Barter Books is Edition Three, published in 1970. Its therefore fair to say that the historical account ends almost exactly where my own association with the inland waterways of Britain starts, so its a neat fit.
Whilst the history of the canals construction is interesting, it is information I am very familiar with. What was new to me was the analysis of the period from the mid 1800's to the 1940's, charting the interaction with the railways and the ultimate demise of commercial carrying. I hadn't appreciated how much trade remained on the waterways in the form of local traffic after the long haul trade has ceased.
We are all familiar with the shape of today's system, and aware of the bits which have been lost. But until I read this book I had little appreciation of the routes which could so easily have been built, given a slightly different set of circumstances.
For nearly a hundred years great minds and committees pondered how to revitalise the canal network, making the 18th century transport network relevant to the needs of the 20th century. Questions of competition with railways raged and the possible benefits of canal improvements discussed. In the end even the smartest brains couldn't find an economic benefit to developing the canals and so the book charts the decline into dereliction. To my mind the real miracle is the fact that so much of the network survived at all.
The book is focused completely on the commercial aspect of the canals and I had to conclude that scope for a system entirely devoted to leisure wasn't even on the horizon. There was certainly no mention of the amenity value of the towpaths on which today's canals rely so heavily.
This is no light read, and has been on my reading pile for the last four months as I have dipped in and out from time to time. Its a book packed with fact and figures and if you only ever buy one canal reference book this is the one to buy.