Saul Adam
by John Poole
Saul Adam, a delightful period book published in 1973 but set in the 1840's. 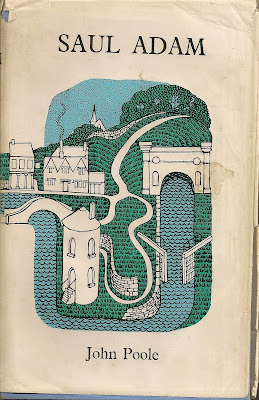 The book follows Adam Black from Saul in his water borne travels from a base in Gloucester. Normally this was aboard nb Venus, which ventured to the upper Thames via the Cotswold Canal to the east and up to the Midlands via the Worcester Birmingham and Staffs and Worcester Canals. At other times he crewed Severn Trows down the turbulent Severn to Newport and Bristol.
But this is by no means an exclusively boat book. The waterways serve as a communication thread which links the book together, facilitating the gentle romance between Adam and Ellen, his bride to be, a farmers daughter in the village of Bisley. Whilst the book is a treasure trove of boating information it also covers great swathes of information about rural life in the mid 1800's.
This worth reflecting on where John Poole was coming from then he wrote this book. By profession he was an engineer and by the looks of it, an avid local historian with an interest in the area around Brinscombe Port where he lived. It would appear that he accumulated a huge body of historically accurate information which was loosely linked into a storyline. This looseness is best illustrated when Ellen set off to seek approval from the bridesmaid's father, a tiler. The book veers into a four page explanation about the construction of the local tithe barns, and again when a local farmer ran from the law to hide in a water mill. Several pages were used to explain how a mill works and, interestingly, that when a millstone is dressed the grooves radiate out following the direction of the sun. Unnecessary to the plot, but fascinating.
If you are hungry for plot the book may leave you cold but if you are looking for an insight into how life was lived 150 years ago, it's asides are a veritable treasure trove.
This book was lent to me by Chris of nb Nebulae, who is aware of my interest in old boating books. Chris, thanks - this one was a real gem.