Bromford Junction is a rather splendid affair, sitting at the foot of the rarely used Spon Lane flight of three locks.

With both Brades Locks to the north and Smethwick Locks to the south, you could be forgiven for wondering exactly why this flight was ever built. The truth is that the Spon Lane locks are among the first built on the BCN, carrying the 4.5 mile Wednesbury Old Canal down off Brindley's main line. 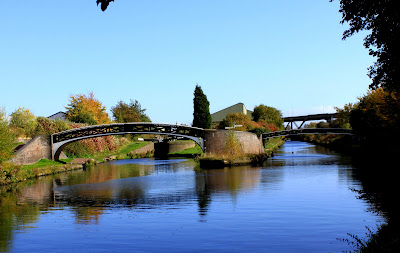 Whilst the chambers of the Smethwick flight were duplicated, and untimately the newer ones retained, the Spon Lane lock chambers are the originals, and are therefore the oldest locks on the system. So next time you are passing through, take a detour up through the Spon Lane flight and absorb some of the history infused into their ancient brickwork.

When Telford cut out the new Main Line - which was then referred to as the 'Island Line' on account of its many toll islands, he joined the Wednedbury Old Canal at the foot of the Spon Lane locks. This created the broad expanse of Bromford Junction, complete with the obligatory iron roving bridge from the nearby Horsley Ironworks.

You wouldn't believe that this peaceful spot is in the middle of a bustling conurbation. Given the right weather the whole area is something of a photographers paradise.