The length of canal following the six locks at Sneyd is very visible as it flanks the towpath, with it's profile filled with trees, assorted rubbish and, on the occasion of my visit, a few inches of water. The first canal structure one encounters is a very unusual house to the west of the channel, effectively a one up one down affair set in the midst of a muddy breakers yard. It is unclear if this is an old lengthsmans home, or something to do with the railway. 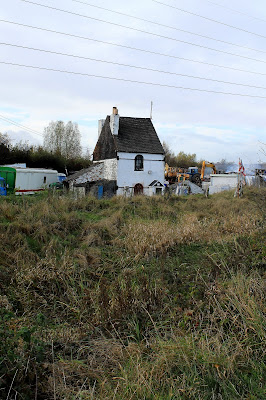 The first mile or so winds round in a big loop, with the old Essington Arm branching off to the north west at the apex of the bend. The Essington section was actually part of the original mainline and the extra 3.5 miles out to Gt Wyrley wasn't built till 1857, 59 years later and 28 years after the Essington section had been abandoned.

This part of the canal has an inner city feel to it, with one of the more troubled estates of Bloxwich bordering it to the east. The estate makes it's presence known in the shape of graffiti, broken bottles and fire marks on the tarmac'd towpath. Not that I witnessed and anti social behaviour, other than the obligatory lunatic on a motorbike who fortunately kept his distance. 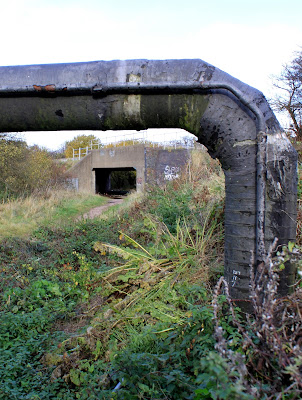 Pipe Bridge at Broad Lane with railway bridge beyond

With the bridge removed, there is little to see as the now culverted canal passes the site of Broad Lane Bridge. However, a few hunderd yards on you arrive at the first of the two railway bridges, preceeded by an arched pipe bridge which is so typical of a canal but so incongrous elsewhere. As soon as the canal passes under the railway the edgyness of urban life is left behind and the canal, now in water, winds it's way through some very pleasant countryside.

This loop of canal behind the railway line continues for a mile or so, ending with a very abrupt left hand turn back under the second railway bridge, with the site of an infilled arm marked by a stand of trees to the right. The corner of the railway bridge is protected by one of the most perfect rope rollers I have ever encountered, and looked to functional I even gave it a twist to see if it still rotated (it didn't). 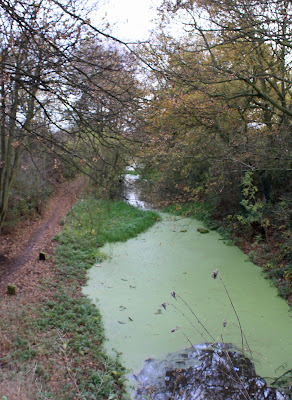 The canal then enters a long tree lined cutting, with occasional square bollards set into the bank. They are probably placed to indicate that the edge is unstable, but many look as if they are ready and waiting a narrowboat to tie up for the night.  Long Lane has lost it's bridge, now replaced by a high embankment with the water channel piped through it's base. Whilst it does represent an obstacle, the vantage point offers fine views along the canal.

As kids living on what was then the 'new' (Mossley) estate we collected stale bread and potato peelings from neighbours and took them to Wally Payne's 'farm' as they kept pigs. For our efforts we were rewarded with sweets from the lady of the house - indicative of an age when you just couldnt ask your parents for sweets and expect to have them.......