Please see my update below.

Whilst the Ridgacre Branch Canal ends 3/4 mile after its start at Swan Bridge Junction, that isn't really the end of the story. 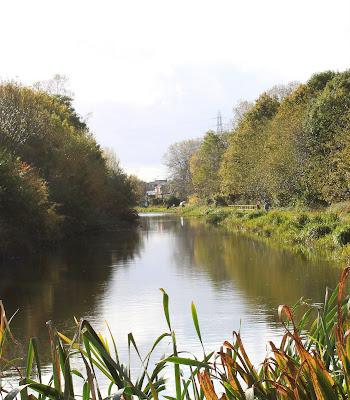 Mining extended over the whole area and, in 1828, two years after the main branch canal was opened, two further arms were created :

All traces of these two arms have long since been erased / built over, but the former junction is now home to an urban wildlife park, complete with its own impressive structure depicting the Ridgacre Branch Canal, past, present and future.

Update 3.11.09
I have since taken a close look on the satellite images offered on Google Maps and have realised that the band of trees heading south from the end of the Ridgacre Canal represents the line of the first half of the infilled Halford Arm.


What is more, all trace of the Dartmouth has not been lost. The first 400 yards lie under a housing estate but beyond that there is another straight stand of trees along the edge of some open gound, which is exactly where my 1860 map says the canal ran. I think that this calls for a bit more "on the ground" investigation when I am in the area again.

As with so many of these intiatives, the park does not seem to be quite realising it's potential, and I certainly saw no hint of the cultivation depicted in the presnt aspect of the sign. 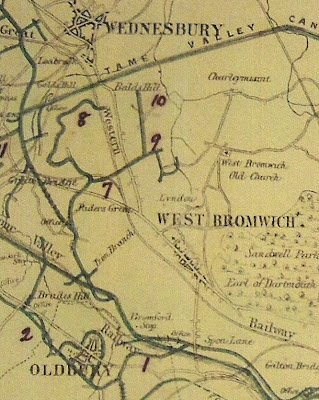 None the less, it made a fitting landmark at the end of the arm, before I sped off down the embankment and attempted to make my way cross country to the start of the Toll End Communication Canal, at the foot of the Ryders Green Locks.

Excellent! I have a personal interest in the Halford Branch, but have been able to find out little about it. When we managed to get to the end of the Ridgeacre Branch a few years ago I cycled off in search of evidence, but, like you, found nothing. (I called in to a cafe in West Bromwich and asked there - no-one had heard of it. Good cup of tea, though.)

Halfie
I think it must have been completely built over, like its northern brother, the Dartmouth Branch. Whilst I failed to find any material evidence of the Halford, the Ridgacre was a real bonus.
Hold onto your hat - there is more of this kind of inconsequential trivia yet to be posted!
Andy

Nice post. During the BCN Challenge last May, one boat made it to The Swan. Several of us were keen to explore beyond the road but alas, no time.

I understand that the 'track' of the Balls Hill Branch is traceable right to the site of the old aqueduct.

Over the last year I've been overlaying 19th Century OS maps onto Google Earth and it's fascinating what you can discover as still existing...even if not visible on the ground.

Mark
Have you been concentrating on the BCN in particular, or any lost canal? I recently came across a set of old maps for Tipton and it would appear that virtually the whole area was a canal at one time or another! I will track down the rest of the Wednesbury Old Canal to Balls Hill over the winter.
The lesson have learned from this is to check out the old maps and Google Earth before getting the bike out!

I've been concentrating on the BCN and used various sources of old maps (often different versions and different scales) and then using partially transparent overlays onto Google Earth. It is often possible at the larger scales to overlay individual buildings and this allows the 'recreation' of exact lines .... within a few metres...

It's great fun and makes it possible to identify old wharves, old buildings, railways which can then be explored 'live' later. It's good fun.

One of the most fun parts was identifying the exact location of the original Bantocks yard on the old maps, then on Google Earth, then finally with the GPS in the flesh.

Mark
Its not the sort of hobby one likes to bring up at dinner parties is it? But I agree - its fascinating and Birmingham holds so much potential.
Sad man that I am, I have spent the evening plotting the Wyrley Bank Branch and Lord Hays Branch out near Bloxwich.

Are we in some kind of 'Saddest of the Year' contest here?

I have mapped out most of the branches in the Walsall area and am keen to getsome of the older, original roads and especially mines mapped out. It was fascinating locating all the coalmines around the Cannock Extension and then tracing the canal up through Norton Canes (still visible from air and ground).

So much more to do!

I always thought it would be nice to somehow link old photos onto some kind of Google Earth/Google Maps engine to create a historical flythrough of the most interesting parts of the BCN.

Mark
I take the view that if something captures your imagination you should run with it, even if it serves no purpose other than to satisfy your curiosity.
I think the spirit behind this is the reason Captain Ahab's Watery Tales exists.
Andy

It's certainly an excellent philosophy :)