During my research into the Wyrley Bank Branch canal I noticed a record or a further, older branch which left the main canal about a mile up from Sneyd Junction,  above the six Sneyd Locks. 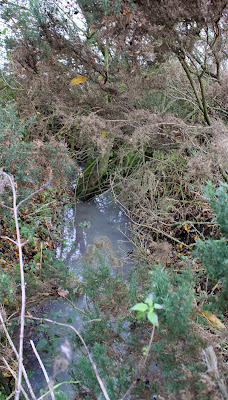 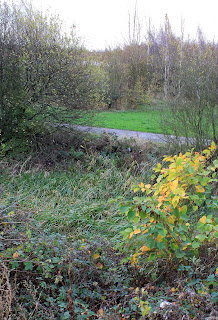 Essington Canal - the start, and the finish

A more careful investigation revealed that this is the line up to a Mr Vernons 'New Pit at Essington', and was the ultimate destination of the canal as it was originally built in 1795. This last length lifted that canal up through another five locks to a short top pound 536 feet above sea level. This height is remarkable as it represents the high point of the BCN system, beating Titford pools by 22 feet and holds the record as the 3rd highest canal in the UK - only 64 feet below the Rochdale Canal's heather fringed summit (The Huddersfield Narrow Canal is the highest).

This waterway was very shortlived, closing in 1830 when the pit at Essington was economically played out.

I had trouble identifying the line of the canal from the Bloxwich end, so I drove round to the A462 near the M6, parking up in a gate opposite Rose Cottage. I could see immediately that I had the right place because:

1. To the west the remains of Essington Open Cast Mine were clearly visible, the site of Mr Vernons 17th Century mine.

2. Opposite this site two widely spaced hedges march off, arrow straight, towards Bloxwich, with a land drain at the centre.

The route had stiles and a reasonably clear footpath, so I explored on foot, initially following a farm track which reduced to a footpath at the site of the top lock. Now, it is very difficult to be sure about the exact location of the locks, and I could find no concrete evidence of their presence on the ground. However, for the most part the line of the canal was flat, except for five distinct but shallow rises. 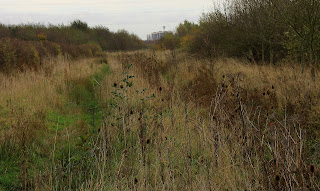 The line of the Essington Branch Canal - with the towers of Bloxwich beyond.

The trouble with this canal had to be it's extreme elevation. Surface water is almost non existant. It was clear that all the  local streams had been harvested for every drop they could supply, but there was never enough to satisfy the needs of an industrial canal. One can only assume that the mine workings at the Essington Colliery required constant pumping, and that these waters provided an adequete supply. 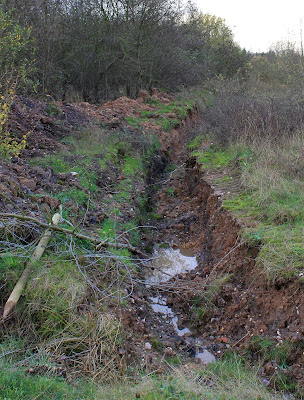 Soil anomolies across the line of the canal


As the path ran out of the farmland and into some woods, the frequency of the undulations increased and I was delighted to discover a recently created land drain crossing what I believed to be the line of the canal. Sure enough, the red sandy soil which is usual in this area gave way to about 25 feet of darker soil, interspersed with chunks of grey clay, which have no place in the geology of the area.

The Essington Canal line ends up at the scrap yard on the curve of the Wyrley Bank Branch Canal. Interestingly, a pond has recently been excavated at the end of the route, throwing up a large number of old bricks and clay, possibly the last reamining solid features of a canal abandoned 170 years ago.

Strangely, for all its shortness and lack of structures, this canal walk was among the most absorbing I have undertaken to date. I took one final look at the site of the Essington Colliery, currently being reprofiled and soon to resemble the Cheslyn Hay site in the north. There was little to show for all that industry apart from a few chunks of coal tailings mixed in with the sand.