Hoisting ones own petard

Hoisting ones own petard

I have never known exactly what a petard is, but I know that you don't wish to be uplifted by ones own.

I was met by a fascinating scene a few weeks ago near Slade Heath Bridge (Coven) where some folk appeared to be erecting a gallows on the front of a narrowboat. Now I know that boating has been getting expensive lately,  but this seemed to be an extreme way of expressing disappointment. 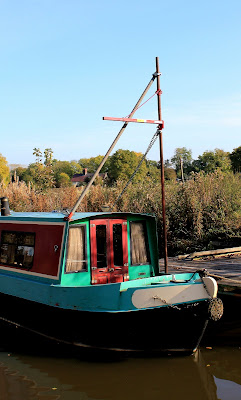 A week or so later all became clear. The boat in queston is the pride and joy of a couple who have spent weeks and weeks afloat, never going very far but clearly gaining great satisfaction from just being afloat. I didn't see much of them in 2008, which was unusual but I thought little about it at the time.

On my next trip down this section of the Staffs and Worcester I spied the captain sitting in the cabin, with his lady wife doing some tasks on the bank. He gave me a cheery wave of recognition and it was apparent that he had been unwell, and is currently confined to a wheelchair. However, he has managed to cobble together a gantry which allows him to be hoisted down into and out of the boat.

I really admire this approach. If I were in a similar position I would like to think that my family would work out a way to keep me afloat whist I recover, even in the resulting structure prevents the boat from moving more than a few hundred yards in either direction.

Ten out of ten for ingenuity and dogged perseverence! Get well soon good sir.