Last nights mooring was a mobile phone deadspot, but that didn't stop a rogue text message from Tilly finding its way to me at 6.30am - six hours after it was sent.  Grr.

I poked my head out at 7.00 am, but everything was enveloped in a thick autumn mist so I shuffled back into my pit and had another try at 9.00am - success, glorious sunshine. 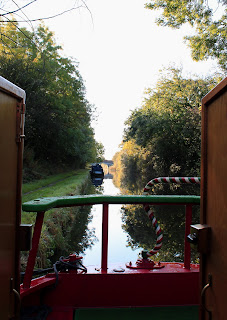 I started the day with a walk back down the Wheaton Aston Embankment with the aim of of photographing an aqueduct I had crossed in the failing light last night. It isn't marked on the map, but given it's proximity to Ryehill Cutting it's probably safe to refer to it as the Ryehill Aqueduct. It's an unusual structure with the cast iron profile of the canal bed projecting down into the vaulted tunnel below. 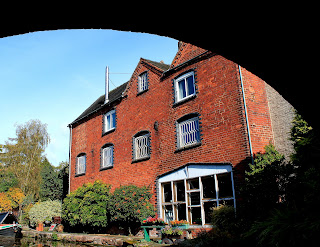 This lazy start meant that I didn't arrive in Gnosall till noon, and then spent 40 mins on the waterpoint refilling a very empty tank. This time was spent lazing in the sunshine reading Dan Brown's latest blockbuster. Then it was on to Norbury where I spent a couple of hours on the vistor moorings opposite nb Starcross. I liked Norbury as what little of it exists is almost all canal related. 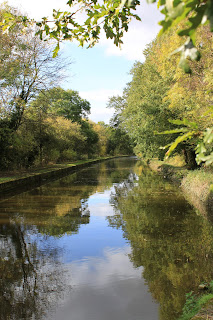 With the weather holding I set off through Grub Street cutting in late afternoon, passing a gaggle of boats at the Anchor Inn, currently the last pub on the canal. I was keen to squeeze the last bit of juice out of this trip so cruised on, winding just north of bridge 44. I had hoped to get a photo of the aqueduct at the southern and of the Shelmore Embankment, but the presence of a high fence prevented access. 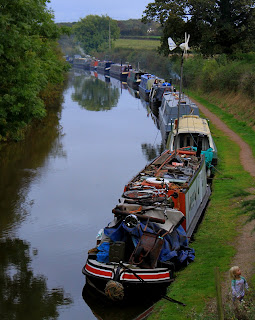 Boating community at the Anchor Inn

I therefore retreated to the visitor moorings just north of the Anchor Inn, prowling round the pub gardens trying to take some night photos with mixed results.

I was fascinated by the Anchor Inn, justifying a blog entry all of its own.