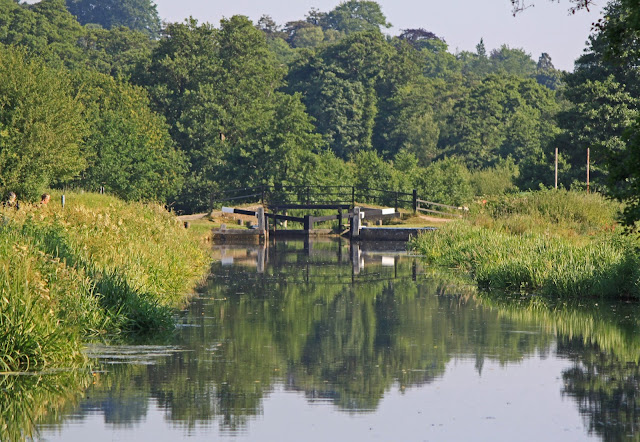 As planned, we woke at 6.00am and were on the move by 6.30. The coolness of the early morning was delicious after these long sticky days. Dew dripped from the boat and Helen even sported a sweatshirt for the first hour or so. 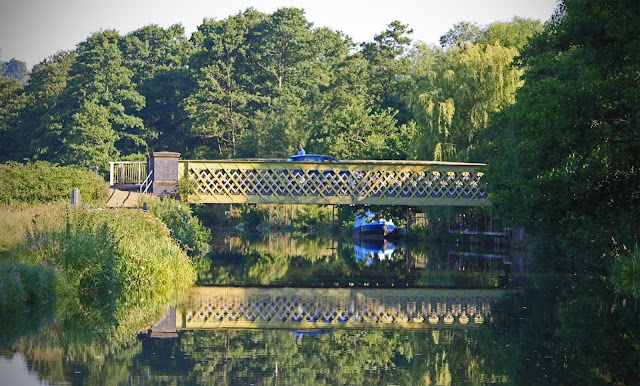 Godalming Wharf has a Sainsburys next door, which includes a fuel station, which was handy because the generator was running on fumes last week when we used it to power the printer. 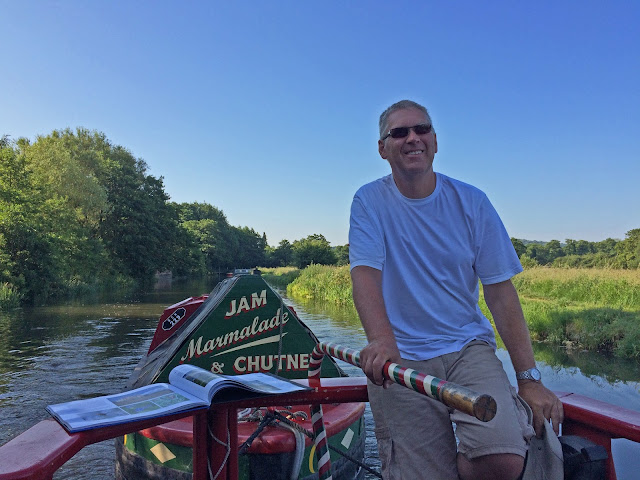 Off we went along a mirror calm navigation, the early morning sun flickering through the leaves and here and there an early morning jogger out on the towpath. As we approached Guildford the towpath started to throng with walkers going to work, not something I have encountered in any volume before. 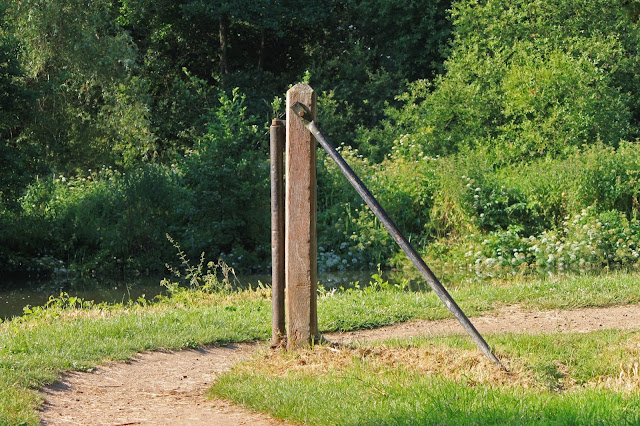 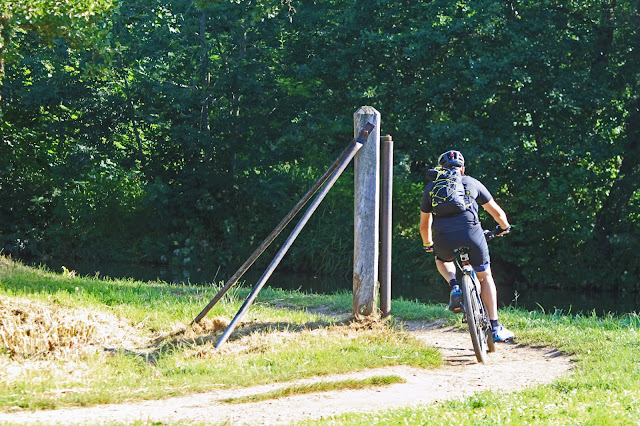 The river sections are extremely winding, so twisty that the navigation authority installed rollers on the bends to guide the ropes round. I would imagine that a long lining pair would lose sight of each other, and heaven help any pedestrians caught by the tight tow ropes and the motor hauled the butty against the strong flow. Of course, we are coming downstream now so our progress is much faster, and that also creates problems on the corners where there isn't really time to get the butty through one turn before its time to reverse it and go the next. It certainly tested my control skills to the limit and I only went aground once, and that was because I was also trying to photograph the rollers. 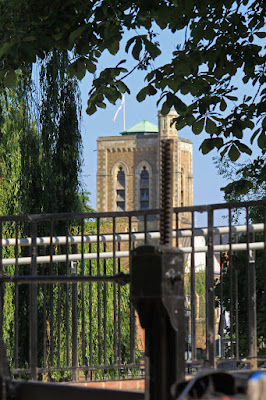 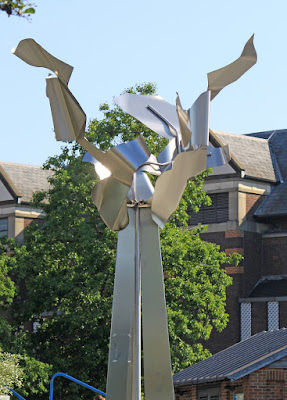 The bends were not the only obstacle. A lone rower was out from Guildford Rowing Club, working up a sweat powering up and down the river. The trouble was that he was so focused on his rowing he never thought to cast a glance behind him. I was coming downstream at maybe 2.5mph and he was dashing along at about 10 mph, so we closed fast. I noted that he was holding the right of the river to I moved to my right and it appeared he had clocked me and made allowance. Not so! As he got closer to me he moved back more to the middle and although there was no chance of his boat hitting mine an oar clattered our side. 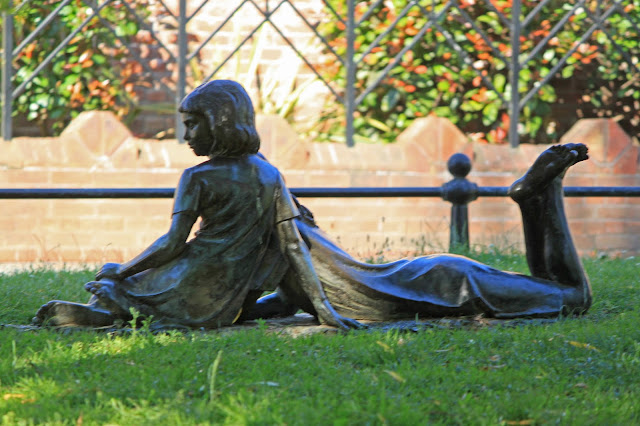 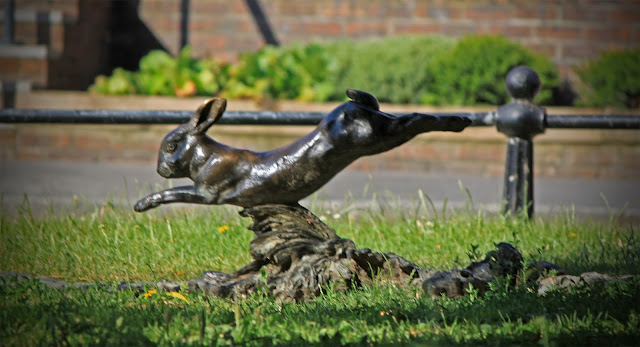 Alice, her sister and the hare

Now I would assume that rowers have a responsibility to keep an eye on where they are going, indeed many seem to have a sixth sense about other boats, but this one was obviously startled and yelled that I should have shouted warnings at him. He was completely shocked at my suggestion that he casts a glance behind him from time to time. How is it that is you do something wrong its always someone else's fault???? 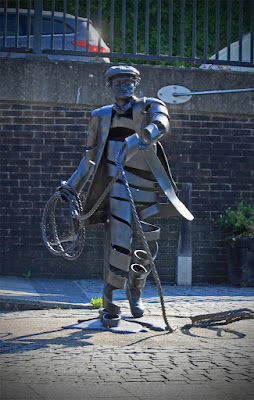 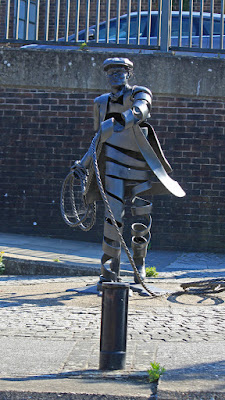 The Bargee in Guildford

Anyway, rowers aside it was a tranquil trip through Guildford, spotting a number of great sculptures on the towpath. 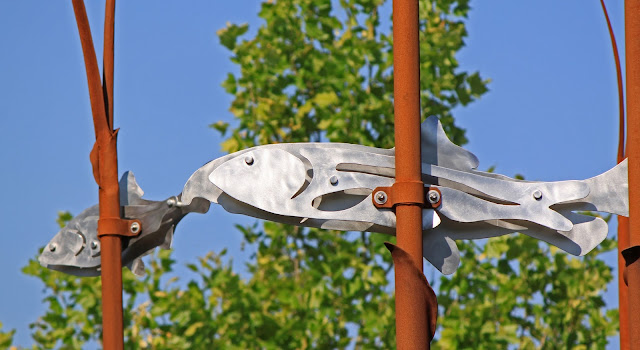 By 10.30am the sun was hot so we pulled in at the shady spot we used a couple of nights ago and waited out the day, to resume movement on the cool of the evening.

So, after an eight hour pause we set off into the setting sun. All traffic on the Wey Navigation has ceased and one by one we passed the northbound craft which has passed us as they toiled through the heat of the day. 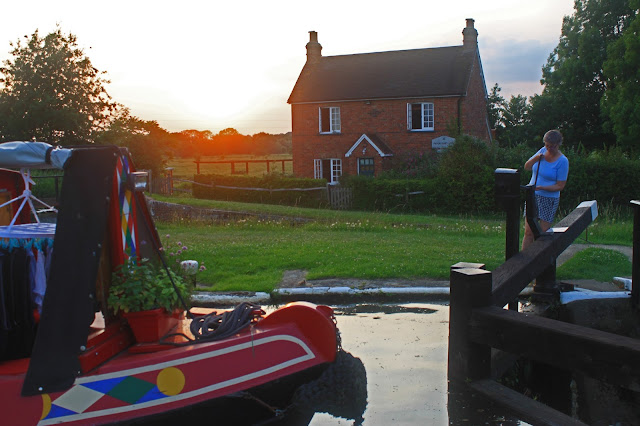 We slipped down the waterway as the sun dipped away to the west, setting as we passed Papercourt Lock and then Newark Lock at about 9.15pm. In the end we moored on the water meadows just above Walsham Flood gates, pulling it at 9.30 as the light was failing.. 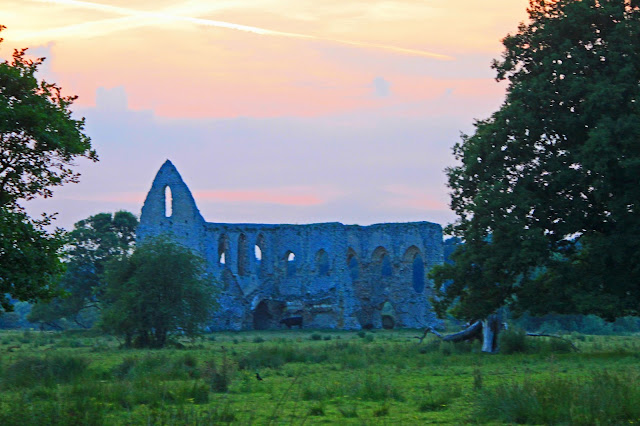