Of all days which would you pick to visit Hampton Court Palace? The hottest day since 1976 when the thermometer hit 34C?. Yup, that's the day we picked for our visit! 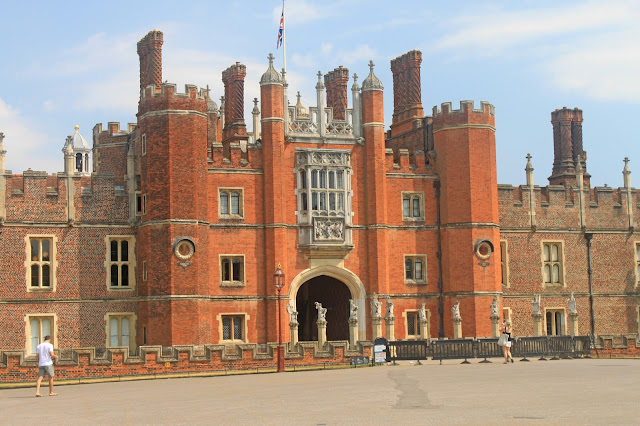 These last few days have been stifling and I was really not happy about dropping down to the Hampton Court moorings, which mean both the motor and butty would sit for the whole day in full sun. Instead I decided to look for a shady spot before the lock and came up trumps tight opposite the weir. The water was deep and there were some trees which would offer shade all day. There were no notices to say we couldn't moor there so I decided to go for it and apologise if necessary. There were some convenient trees so we roped in on three places and headed off to the Palace in blistering heat. 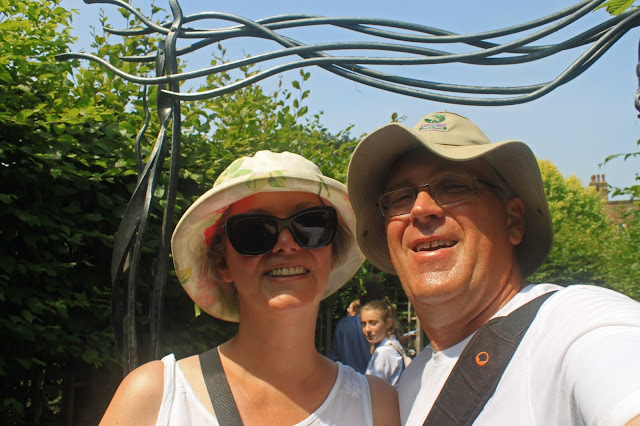 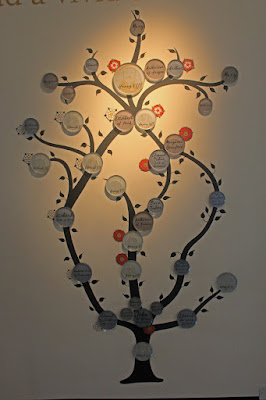 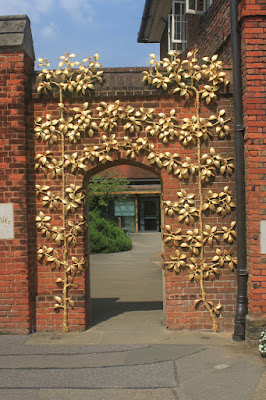 The old Tudor Palace really was the place to be on such a hot day. True it wasn't exactly cold' but it was very good at keeping the heat out and allowed us to explore Henry 8th's palace in reasonable comfort. We also visited the Maze which proved surprisingly easy.

By 3.00pm we had had enough and returned to the boat and the shade of the stern deck. To freshen up we had another swim and concluded that the easiest way out is to climb up the butty's elum. The rest of the evening was spent trying to stay stay cool accompanied by the distant refrain on a Bryan Ferry concert taking place in the Palace grounds. The only sad aspect was the arrival of an air ambulance and the emergency services who ended up pulling the body of a young lad out of the river, a lad who had apparently got into difficulties trying to swim across. 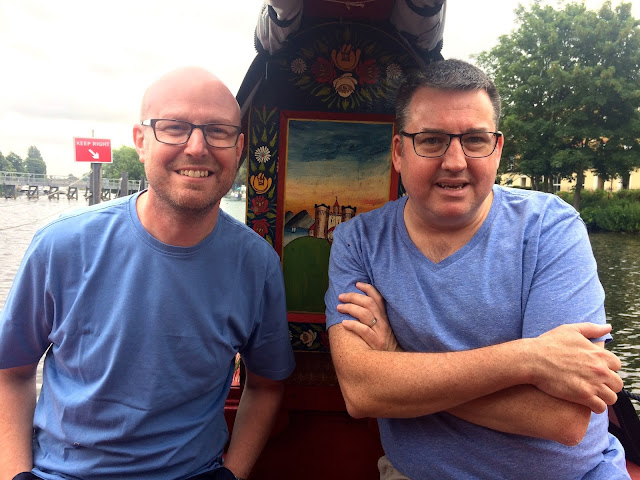 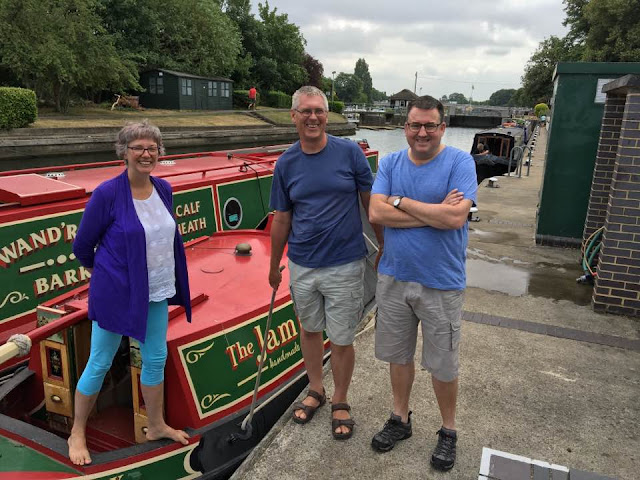 After a suffocatingly hot night Adam and Adrian (Briar Rose)  popped in for a drink and a catch up, which was a lovely bonus. 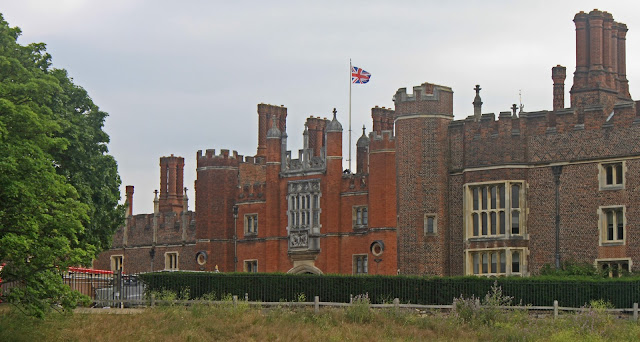 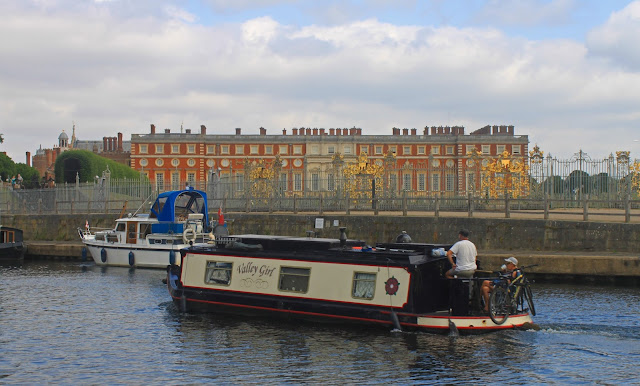 But then it was on to the main event of the day - the tidal crossing from Teddington to Brentford. We cast off at 11.00am and reached Teddington at 1.15pm, joining the line of boats waiting to be lowered to the tidal Thames, just before high water. High water was 2.10pm and we are out and at it by 2.00pm. 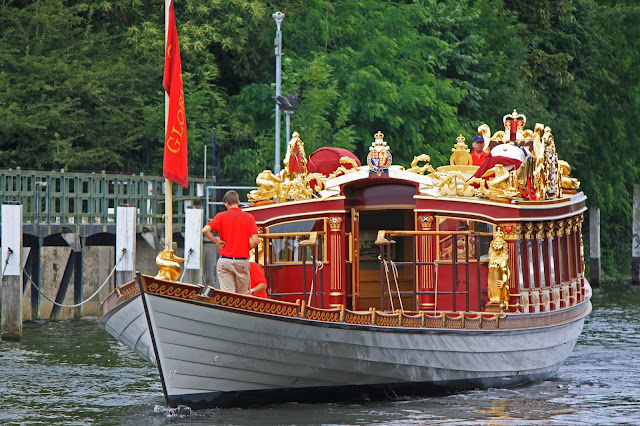 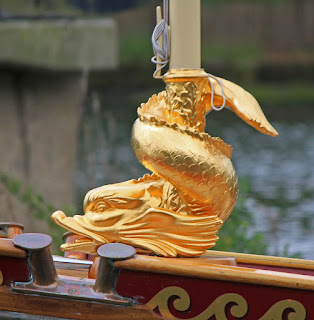 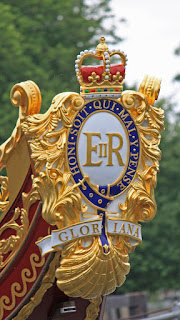 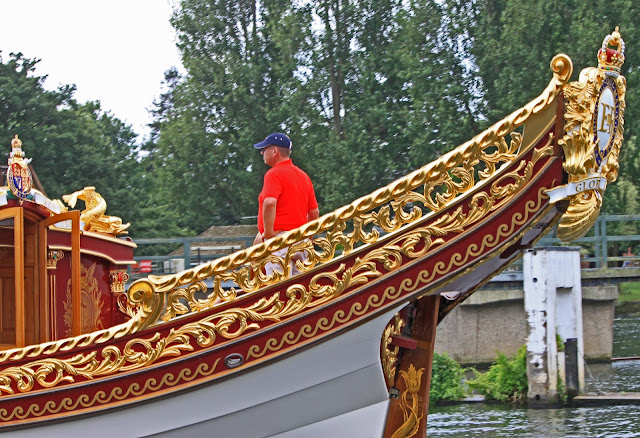 Just before we entered the lock we saw a flash of gold and realised that Gloriana, the Queens royal barge was on its was upstream to Staines. The vessel was made for the Golden Jubilee celebrations and still looks absolutely amazing. 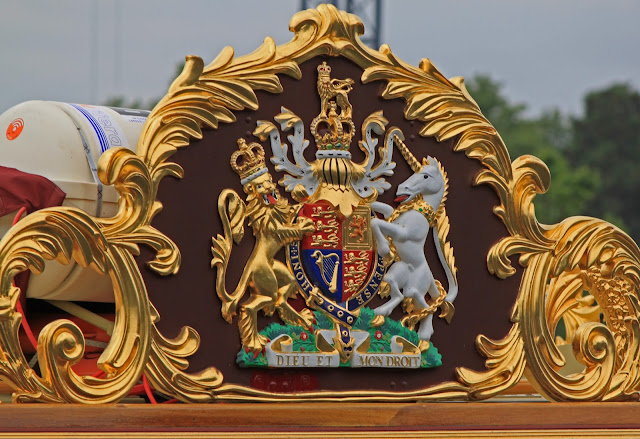 They let us out knowing that a narrowboat can safely make a passage to Brentrord before the water level drops too far to get them over the cill of Thames Lock. The problem for us is our speed, or lack of it. Most narrowboats can make six or seven mph over still water but I know that with a butty on the side the best we can do is about 3.5 mph. So, the question was : could we make it to Brentford in time? 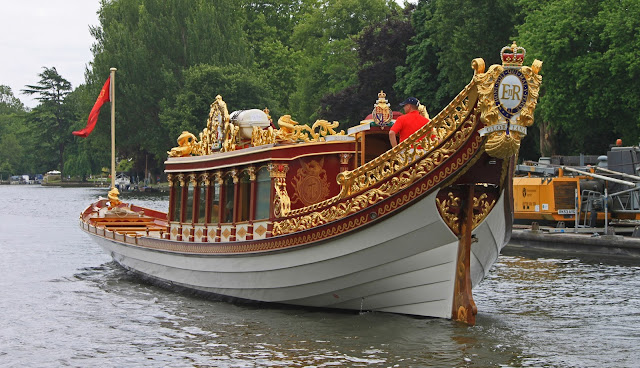 We pushed the revs up from the usual 1300 rpm to 1600 which increased our speed a bit, but the other four narrowboats soon left us behind and we were on our own as the tide turned and swept us downstream at an alarming pace. Landmarks at Richmond flashed past as we hurtled under the various bridges and then over the Richmond weir which retains some water in the upper section. Beyond this we really were on our own, powering away through all sorts of floating detritus, and all the time with the nagging worry that if we miss the turn into Brentford we probably don't have the speed to punch the current and claw our way back upstream. 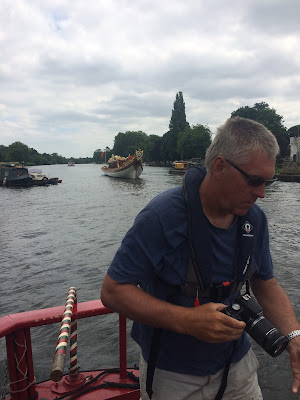 We kept a close eye on the map and edged over to hug the northern bank ready to turn in as soon as the channel to the locks comes into view. The key here is to turn in upstream of the scuplture on the point. We swung the boats out of the ebb current with a huge sense of relief and slid into the welcoming CRT lock which had been set by volunteer staff. By this time the water level had dropped four or five feet and the passage had taken us exactly 1.5 hours. Brentford lock may not win any stakes in a beauty pageant, but few locks have been as welcomed!

The CRT staff were charmed by the concept of hr butty and we had sold three jars before we even exited the lock!

Almost at once the change in moorings were apparent. Gone was the empty channel of seven years ago, and in its place it was nose to tail boats. Fortunately we found a 45 foot gap before the A4 and edged in with the butty still on our side. We will sort out the towing straps to run in line astern tomorrow morning as we make for Bulls Bridge.