Donnington Wood Canal Pt3
Granville Country Park and the Lodge Arm
February 2012
This is the second post in a series of ten covering the Donnington Wood Canal, but in reality it is the first post from the second day of our field research. From here on the maps tell us that the route is at time indistinct and at other times it is utterly lost, so our exploration dotted back and forth all the way to Lilleshall Quarries and Pave Lane. 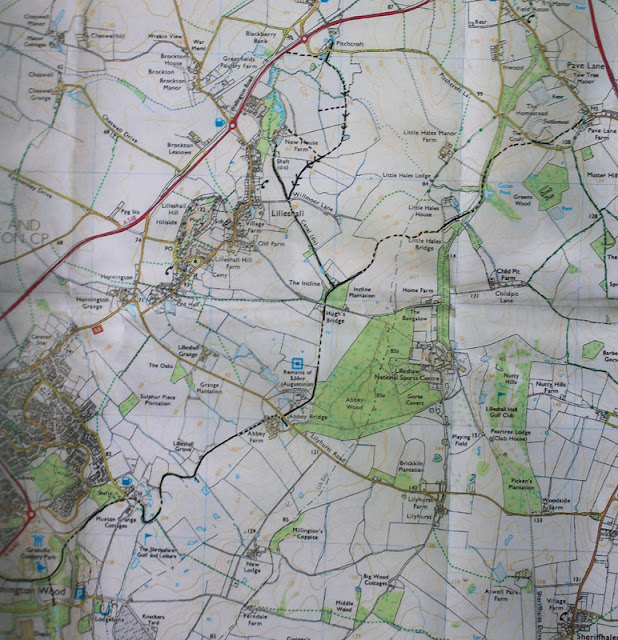 To make the account easier to read the posts will follow the course of the canal in sequence from west to east, starting at the Donnington Wood Road where it borders the Granville Country Park. 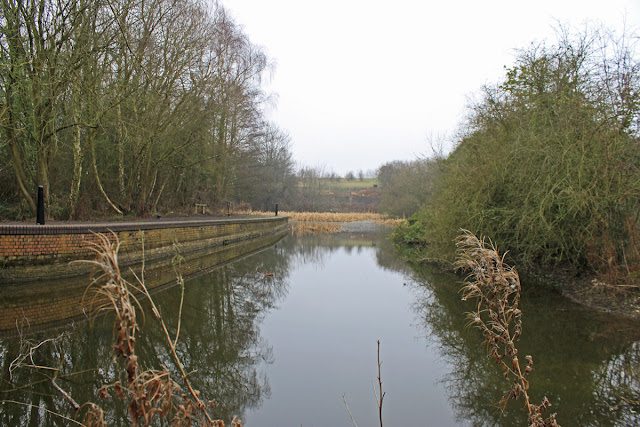 Lodge Basin 2012
This marks the boundary of the modern urban Telford with the countryside beyond, and it is important to get the entry point right. It is tempting to assume that place where the footpath runs under the road is the course of the old canal, but in fact you need to go a couple of hundred yards to the south and enter the colliery site through the gate marked private. Why are all the most interesting places private? 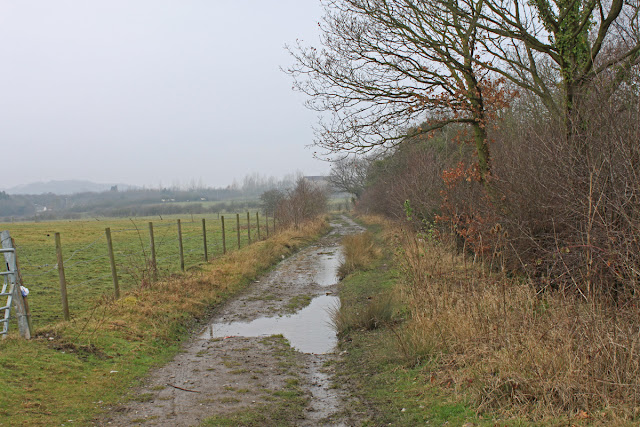 The path at the entrance of Granville Country Park
The line of the canal describes a wide arc bending steadily round to the left before turning nearly north under the lee of a long escarpment covered in trees. The modern track dosn't actually run on the line of the canal, but rather alongside it to the left,  and about 30 feet higher up! On this stretch it isn't the line that is the problem, its working out the levels in an area almost devoid of clues. We initially dismissed the adjacent trench as being far too deep for an early canal cutting but its true, the canal ran way below the modern ground level, either that or the ground has sunk a lot. 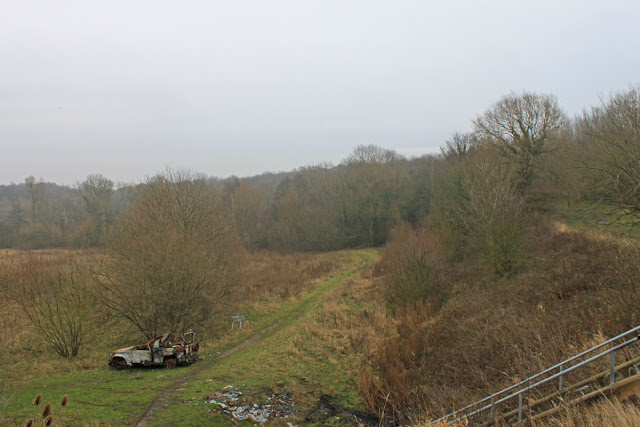 Course of the canal at the bottom of the escarpment
Now here is the thing, this wasn't always a country park. Far from it, it was home to the huge Granville Mine and the Iron Smelting Furnaces it supported. This development was started by Granville Leveson, the 2nd Earl of Gower and, having made his pile of dosh, his successors became the Dukes of Sutherland. It is said that this family raised merry hell in the area, racing their souped up steam powered Dodge Challenger pursued by Sheriff Rosco P Coltraine and Boss Hogg - thus starting a tradition for illegal motor sports which persists to this day. ;-) 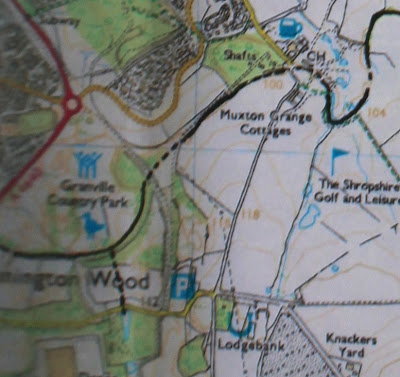 This was ground zero of the the early industrial revolution and what with mining subsidence, slag heap re profiling and the creation of many tramways the topography of the area has been altered hugely. 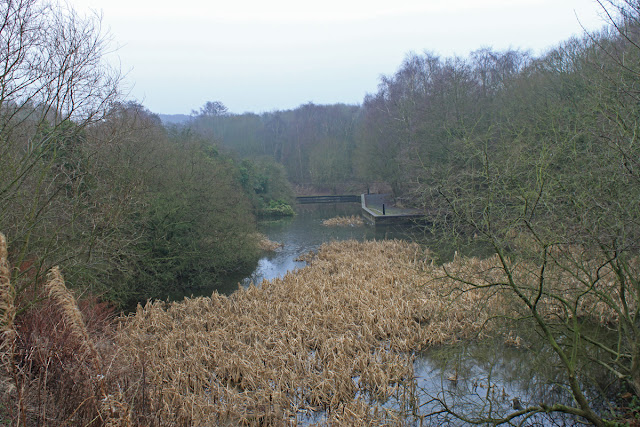 Lodge Basin from the entrance bridge 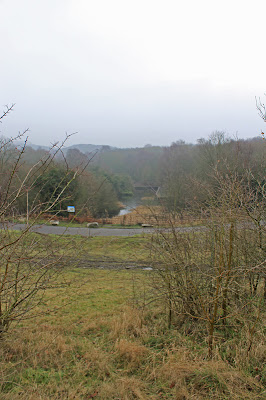 The line of the Lodge Arm from the top of a 50ft slag heap
In the middle of the park you come to a crossroads, home of several burnt out vehicles (its that sort of park) and knowing that the Lodge Arm was off to the south it was tempting to think that the canal must have followed the graceful curve marked my the big green posts. The posts certainly take you to the right place but it wasn't the line of the Lodge Arm. At first glance we laughed when we saw the Lodge Arm Basin, all prettied up and nestling in the trees complete with its wharf and mooring bollards. It was far too low down. Gradually the penny dropped - that 50ft high hill behind us is man made, thrown up by the tailings from the Granville Colliery which reached out for several miles wreaking havoc with subsidence all around. 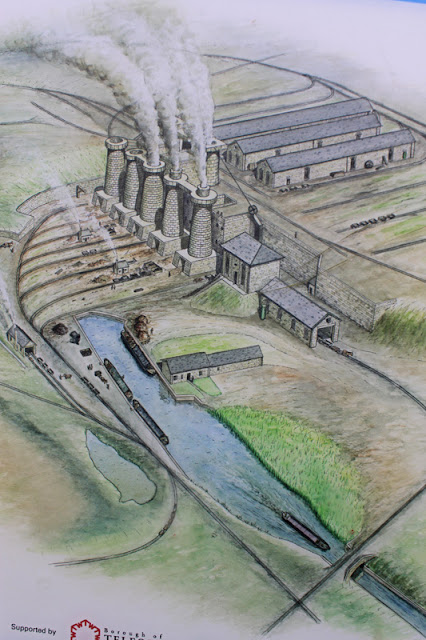 Artistic license at the Lodge Furnaces

The Lodge Arm was built in 1822 to serve two Iron Smelters build by the mighty Lilleshall Company to supplement its works at Donnington Wood. This site was expanded in 1846 and again in 1859 till finally five furnaces were operating on the site, all fed by coal brought in on small tub boats. Of course, the site is on the original level of the canal, but we did have the last laugh. The furnaces were blown out in 1888 but the display board shows a cheerful picture of traditional canal boats "put, put, putting" in and out of the basin. This is wrong on so many levels: It was a tub boat canal so no full length boats could pass through the inclined planes, the locks and bridges were limited to 6ft 7inches which is narrower than normal craft and crucially, the furnaces closed at least 30 years before the first spluttering Bollinders were employed in commercial carrying. But not withstanding all that, its a nice scene and a watery oasis in a sea of industrial decay. 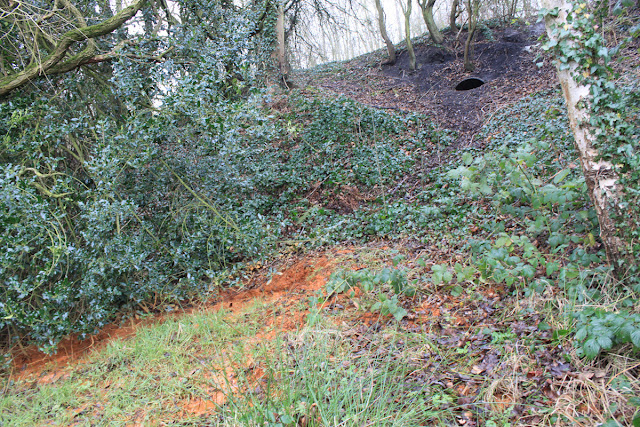 The toxic Lodge Junction
The exit from the Lodge Arm was under a bridge whose southern portal remains and then its line is buried under abut 50 feet of slag. My question was - where does the water from the basin go?. To answer this I clambered down the bank at the far side and into the valley bottom where the main line canal appeared to run. A bit to searching led me to a huge iron pipe which emerges from the ground beneath which it the most lurid orange goo you ever did see. Its like quicksand mixed with fluorescent super glue. We had found the far end of the land drain, the site of the junction with the Donnington Wood Canal and perhaps most importantly, had established the level that the canal used to run at. From there it was a simple task to back track and figure out how far down the canal path used to run.
If you are tempted to explore the melancholic delights of this path, and you do take the time to find the Lodge Junction, steer clear of the toxic goo - I am still trying to get it off my shoes!
Posted by Andy Tidy at 6:00 am