Business has taken me the Bospherous twice in the last fortnight. Whilst Istanbul is undoubtedly a wonderful historic city, I have to admit that my schedule left no time to explore - not even an evening out on the town. 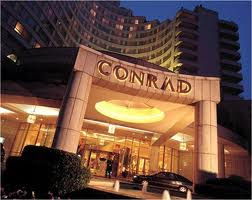 I have acquired the reputation of being something of a meteorological Jonah, bringing adverse weather with me in my hand luggage. They tell me that it rarely snows in Istanbul, but I am not sure I believe them. The first time I arrived, the heavens opened and dumped about 6" of the white stuff a couple of hours before I landed. The result was a commute across town which took nearly as long as the flight out from the UK.
My second trip was even worse. This time the snow really set in 24 hours before I arrived and as a result my outbound plane was snowed in and didnt even make it out of Turkey, leaving me with the task of making my way to Heathrow if I was get there at all. Then my fairy godmother arrived in the shape of Fatimer, a tiny Turkish lady who offered me a seat in the taxi she had booked, because she fancied some company. The words gift horse and mouth came to mind. 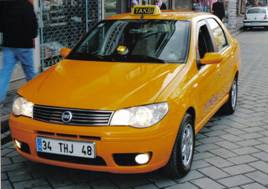 The ubiquitous Fiat Taksi
Of course, the outbound flight was delayed and my planned arrival time slipped from 6.00pm to 3.00am - but I made it out there, which was more than most of my colleagues. Then it was work, work, work to complete my task in the midst of an unending blizzard.
So what are my impressions of Istanbul?
1. Its huge. It has over 11m inhabitants - so its in the London league.
2. Density. Its an intensely populated city of low rise apartment blocks which stretch off into the distance with not a scrap of garden between them.
3. Mosques. There are over 1000 of them and the one near the Conrad Hotel does a mean line in an early morning call to prayers. Its speaker festooned minarette joining with the others across the city in an ethereal chorus to Allah.
4. Busyness. These guys work hard and long after long commutes from the city periphery.
5. Taxis. The city is crawling with little yellow  reasonably priced Fiats, their drivers jockying for position and parping their horns more in encouragement then anger.
6. History. A truly ancient city straddling the implausibly narrow Bospherous through which an endless procession of ships thread their path. A cultural crossroads which has played a pivotal role in the Med since the dawn of mankind.
This city offers a heady mix of the old and the new and I an so aware of what I have missed. Its is certainly on our "must visit properly" locations when we have an opportunity.
They tell me it dosn't snow on August, but I'm not entirely sure I believe them...
Posted by Andy Tidy at 5:33 pm