Idle Women
by Susan Woolfitt
February 2012
One of the benefits of my European travels is that they offer scope for some serious reading time. All that time hanging around in airport departure lounges and then the tedious hours on the plane needs some form of antidote, and what better than a good book in your bag?. 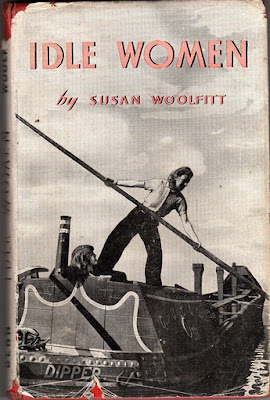 This time the destination was Istanbul, a surprise trip organised at 48 hours notice. Fortunately I was well stocked with boaty reading materials care of Bones. She has left me with copies of Idle Women by Susan Woolfitt and The Amateur Boatwomen by Eily Gayford, two similar books covering  wartime boating. I opted for Idle Women this being the better known of the two and a book which has become something of a seminal work on the subject of the wartime volunteers.
I am not sure exactly what I was expecting from the book, probably something along the lines of Hold on a Minute and to a certain extent that is what I got. The book largely covers the GUCC patch up and down the Grand Union between Limehouse and Birmingham, but from the perspective of one of the small group of women voulnteers who filled the shoes of the men who were in the armed services. In doing this they entered the parallel world of the cut and did their bit to keep the wheels of industry turning.
Its a fascinating tale of a small band of brave women who answered the call of the MOD. Susan was a single parent mother who's children were away at boarding school and was able to offer a term time commitment to the cause. Somehow she managed to persuade them to accept this arrangement and the book chronicles her year afloat. It starts with her orientation trips up the Grand Union to Birmingham and then branches out to Oxford and Langley Mill. The book provides an absorbing insight into the mechanics a operating working boats and the nature of the boaters themselves during the swansong of commercial operations on the inland waterways.
The book fully warrants its enduring profile. It is well written and is both informative and amusing - not bad for a book written in 1947.
Perhaps the loveliest thing about the book is the way it captures the essence of the canals, the mystery of the cut which encourages exploration round the next bend and the enduring attraction of the English countryside through the seasons. The pop, pop, pop of the working craft may have been largely silenced  but that mysterious allure lives on - ask any boater!
Posted by Andy Tidy at 6:00 am

It's my favourite canal book. She really brings it to life and the tale of this obviously rather posh lady getting down to manual work and enjoying it is fascinating. Some good insights into wartime life too. Highly recommended.

Andy
This was the book that left me entranced by the idea of the Back cabin, hence a boat change, hence Yarwood!!
Lesley

PS. Will be in Brum soon and expect a visit!

Andy,
I think both my wife and I agree this is the best of the books written by the trainees, although I admit it is a while since I dipped into any of them again.
Possibly it benefits from Susan Woolfitt having written it fairly close after her experiences, whereas others like Margaret Cornish's "Troubled Water" were penned a fair bit later I think.
I do find it surprising though that someone like Woolfitt who worked the boats has some of her facts muddled so soon afterwards. I seem to recall she gets her geography at Braunston Turn and/or Napton Junction completely mixed up! Also is it not she that says they had special windlasses to use on the Birmingham main line that meant it was less turns overall to work each paddle? I wish!

Alan
The 'turn left at Napton island for Birmingham' did have me confused..